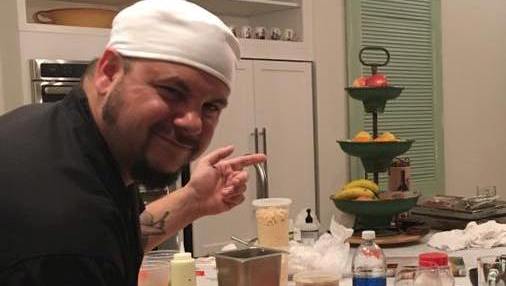 “There’s a foodie culture here that’s really pushing good food, it’s coming. I think people know what’s going on in other markets, like Atlanta. Everyone in the industry here is really getting into this local thing and it’s hot.“

It’s great for the local businesses. Wilmington should really be a destination city for the food, too. There are a lot of restaurants in this town.

Port City Pop-ups tries to push the envelope. Three years ago, I got the idea from chefs in New York – and I wanted a break from what I was doing at Bluewater Grill at the time. Port City Pop-ups 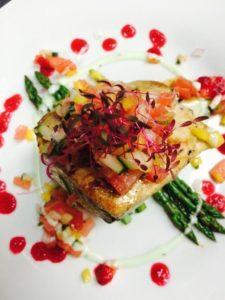 was my chance to get out of the box. To push myself. To try some new techniques. Go with new items, new ingredients. To go with something really new, and do it a little bit better every time.

Port City Pop-ups is a specialty restaurant for one night only. It’s all internet driven. You buy your tickets online. I focus on using local ingredients, and I’ll work with other local chefs to get ideas. They help me with my menu and they may help me execute it, or I’ll use another chef to lay his flavors out. For example, I’ll do it here, at Dixie Grill, because Dixie Grill doesn’t do a dinner and I’m familiar with the kitchen. I’ve sold out every single Pop-up that I’ve done. They go really well. It’s a foodie’s dream. It really is. I’m shooting to do the next one in about thirty days. The location varies, the menu varies. I’ve done a French one, a Hawaiian one. I try to do a different concept – like creating a totally different restaurant – every time I do it. Different menu, different theme, different staff. I started out with three choices for one course, and two choices for another, so if you were out with other foodies, you could all taste everything. But it seemed to be overwhelming, so now I’m going with a set five or six course and choices on just the entree – usually a fish, a meat and a vegetarian option.

After the health hiatus

Today is my sixth day back at work – last week was my first attempt at getting back at it. After my stroke, I didn’t know if I’d do it, but every day I conquered a new thing. I am getting past the short-circuiting. I’m getting there. It was a stopping point there for awhile, and I had to realize that I was physically and mentally able to overcome these challenges. Instead of giving up, you have to keep going. I push myself a bit every day, not too much, because your body will let you know what you’re capable of doing.

My diet has done a 180 – because of my health – I eat chicken, egg whites, some avocado. I do really good healthy food now. One of my next Pop-ups is going to focus on healthy eating, planning around awareness of heart disease. Chefs are not great eaters. We’re always tasting. You can see – there’s bacon here, there’s butter. Really, as a chef, you don’t have time to have a healthy meal. By the time you get done, you’re so hungry, you just plow into whatever there is.

Cooking from the heart

I consider myself international fusion. I like to take classical French, Asian, anything classical and put a modern twist on it. I like international flavors, with a lot of local influence to drive 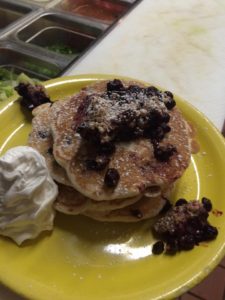 me. Like Dixie Grill, which is fun for me, it’s the other side of food, it’s from-the-heart Southern cooking.

I was executive chef at 1900 Restaurant, and before that at Highlands Country Club in Asheville for a couple years. When I came here from Highlands, my plan was to do the pop-ups and take some rest. It’s a seasonal job up there. You work hard for six months and rest for six months. So I came down here and did the pop-ups and some other things, and then got offered the executive chef at 1900. It became 9 months, and I was working 90 hours a week.

I’ve been in and out of Dixie Grill for about 13 years. Anytime they need a hand, they call me. I was at Bluewater Grill for awhile; I did a huge volume, but was really stuck to the menu. It’s what the people expected to get there, so there wasn’t much room to be creative. That’s what inspired the pop-ups.

I went to New England Culinary institute in Vermont. I’m originally from New Hampshire. I did long stints with an Italian chef, and a French chef, and with Asian chefs. I worked with Keith Rhodes, of course. Up in Asheville, I worked with an executive chef who really brought my French skills out; I did a lot things that wouldn’t fit here in Wilmington – the foodies are ready for it, but not the local clientele – not yet.

We’re all about volume, but everything is 99.9% scratch made. Everything. We might pop a couple cans of tomatoes… but everything else is made in-house. Our sauces, our pancakes, everything. All of our hashes. So keeping up with that volume and really keeping the kitchen staff abreast of the specials and what’s coming out each day is a big thing. We have a huge menu and a very long shift compared to other restaurants. Here, at 8 o’clock, they’re beating on the doors trying to get in. On the weekends, it’s 8 all the way until 3 o’clock. That’s a very long shift. It’s a big push.

Sample the South at
The Dixie Grill
www.thedixiegrillwilmington.wordpress.com
910.762.7280

Opt in for a foodie experience with
Port City Pop-ups