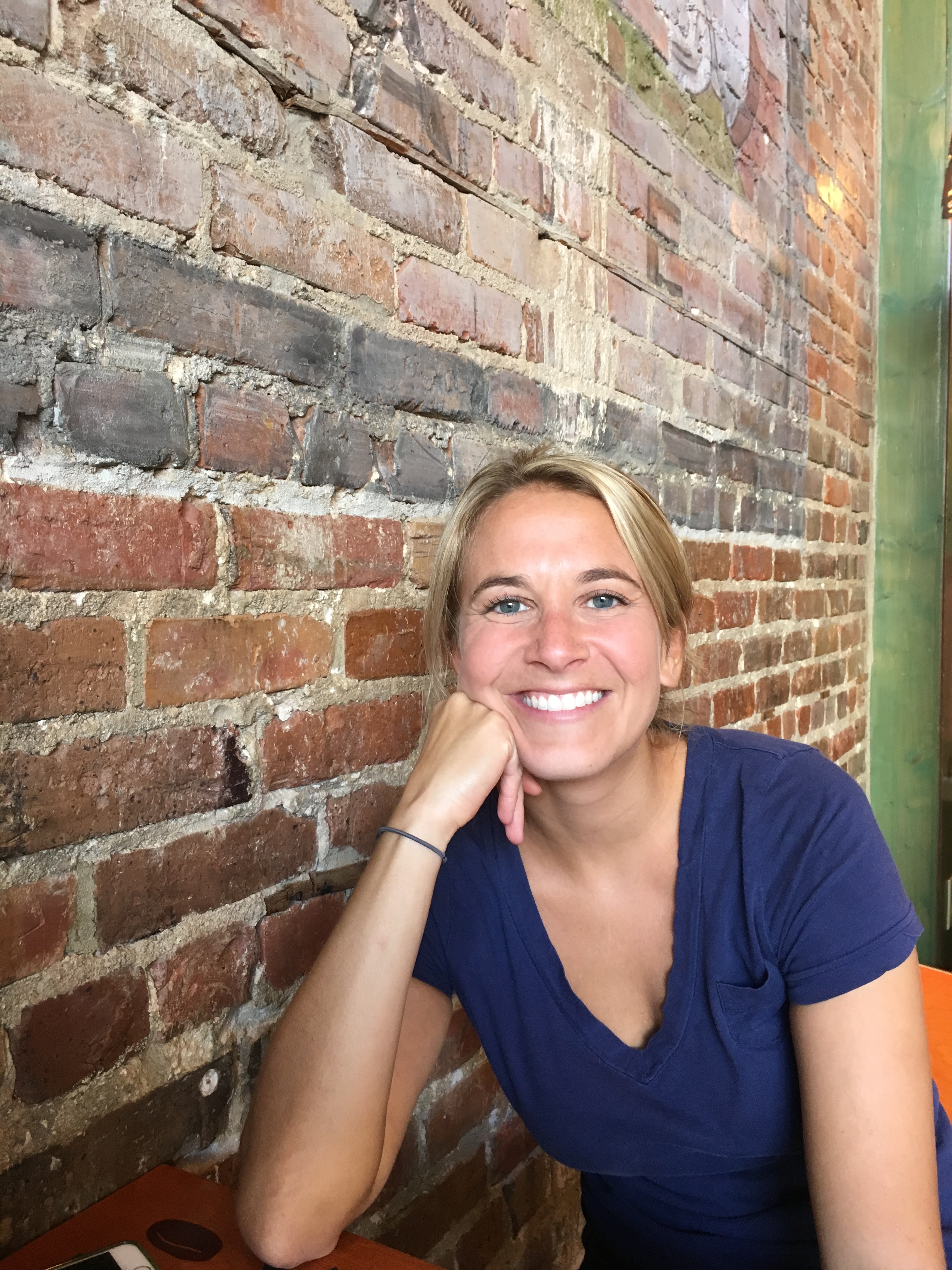 “This food thing, it’s always been a part of who I was. I just loved taking moments from my childhood and recreating them.“

How did you start this thing? Where did you come from?

Where did I come from? [laughing] My mom would say Saturn. I came from this little kid who used to stand on the fireplace and put a thousand outfits on and shake maracas and put on a little show for my parents, so I’ve always been somebody who wanted to be on a stage in some form. That took me to California. Out there, I just really, really honed my passion for food, and cooking. I moved back here – I’m from Raleigh originally – and started a catering company. I did that for a little while.

I’m totally self-taught: the cooking school of Food Network, and of my dad. So, in my catering company, that’s the kind of food I was cooking. And then, here comes this Rachael Ray competition that my grandmother told me about – that Rachael Ray was holding a national cookbook competition – and I took that idea of taking moments from my childhood and kind of turning them on their head and telling the story and making a fun dish out of them. And I ended up winning the competition. Now I’m here in town, just doing food in every way I can. 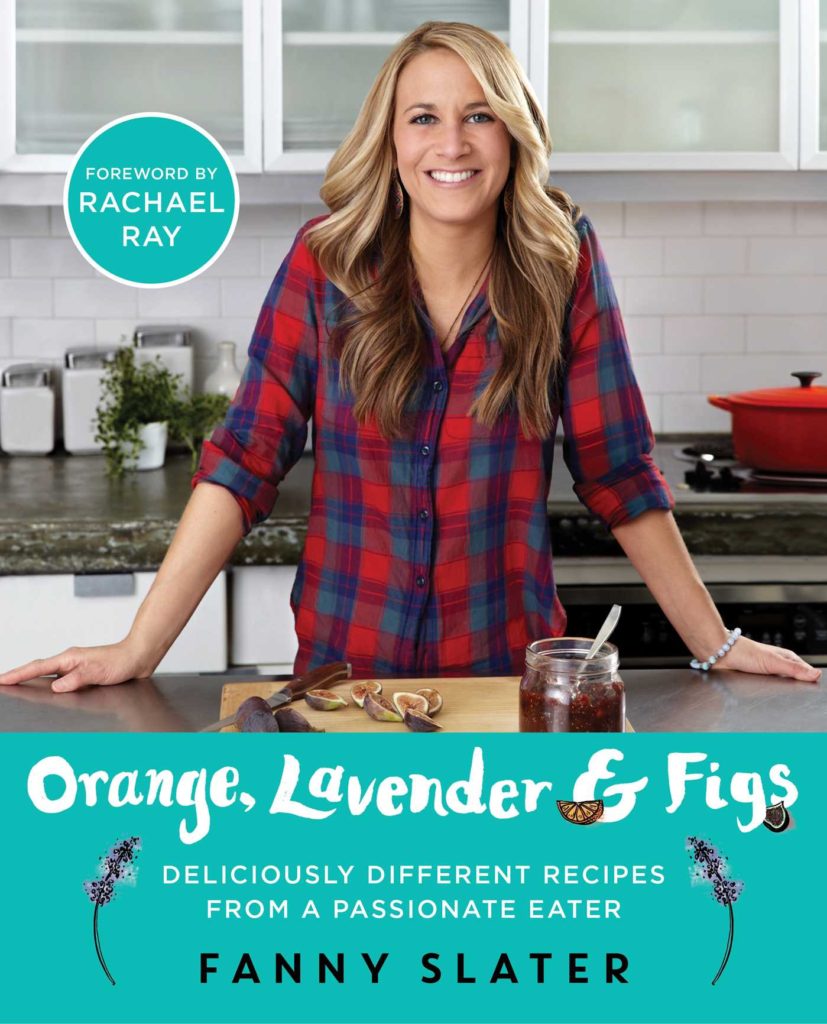 I won a cookbook contract. We all entered cookbook concepts, and the person who won got to turn that concept into a cookbook. It was very unbelievable, because the kind of exposure that I got with Rachael Ray, a first time author would never get. So, I got very lucky.

It’s not at all what I expected. I’m completely self taught. I don’t use measuring cups, I cook to sight, to taste, to smell… and it was really so tough to measure everything. Everything I was doing was really, really structured so that I could write it in a professional cookbook format, recipe-type way. Whereas I’m used to to just throwing things together, saying, okay a little more salt here, a little more honey here, and it was more difficult to cook in that way. But the portion of writing those stories, which is the other half the book, is sharing those funny anecdotes, and that was more than half the work – that was like, the best time ever!

Blogging from the heart

The only thing that had ever clicked for me, school-wise, was English. It was because I loved creative writing, and I loved sharing stories. I found that my stories always had a lot of humor, and kind of a lot sarcasm, and just a dryness to them. I always found my voice. I try to keep that the center of everything I do: the natural, down-to-earth, casual girl. That’s who I am. That travels throughout everything that I do, so when I do food writing – and I was writing for publications here before the cookbook ever came out – and I always, always just stuck to that tone of voice. That’s just who I am.

Working through the cookbook production was really helpful for what I’m doing now, because now I’m doing much more professional recipe writing. Doing that for the cookbook was a great setup for what I’m doing now: writing recipes for products, or pairing food with wine. Writing professional recipes is not as simple as it seems. It’s more of a process, so it was a really good learning experience.

I’m definitely not working toward a new book yet. Orange, Lavender and Figs just came out – it was published March 1. I haven’t had a holiday season with it yet, and I’m excited to go back into promotion for the holidays. The book came out and I had this big boom of events and and promotional things I was doing and I did a “tour” all over North Carolina and the southeast coast, and then up to New Jersey where my dad’s family is from, and did some stuff around there, so my grandma could be there – she’s the one who told me about the competition! Then it settled down over the summer and I’ll start doing events again for the holiday season. It was good to take a breather.

The recipe for blogging

I don’t really make myself follow a schedule, but if I was giving advice to bloggers, I would say, make yourself follow a schedule, consistently be doing something that your fans are looking forward to. I’m still writing for a lot of publications, though, and doing recipe development work, so between those two things, I end up kind of bogged down so that I blog whenever I can. I’ll usually take a recipe or a story from something I’ve done, and put it on the blog.

Instagram is my thing, though! I live on Instagram. If it’s visual, like a food blog, use Instragram, and maybe Twitter, or Snapchat – but I think you need to pick one avenue that fits for your business and be the best at that. Just be really good. I take my own photographs. Good light is the most important thing. I don’t ever want it to look straight on, or to look 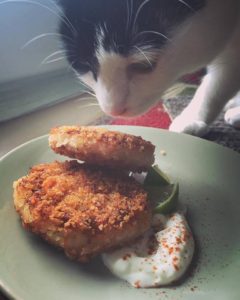 posed. I want it to look exactly how it is when I make it, which a lot of the time, my cat is right behind it, or my feet are in the picture. And I love that, because I think that makes it more approachable. I’m not a professional photographer or food stylist. I just try to catch the good light and if I get a good shot out of it, and if my cat happens to be in the background, that just makes it more unique.

I make a lot breakfast things. A lot of my pictures end up being something with a fried egg on top, just because it’s so amazing. My favorite thing that I’ve been doing right now, I developed for a wine company that I was working with, and I’m kind of obsessed with it. I’ve been making it all the time. It’s like crab cakes, but instead of crab, I use shrimp and instead of coating it in bread crumbs or panko, I use coconut, so they are these crispy, coconut shrimp cakes. And it was just so simple, and, like crab cakes are like this totally comforting thing and we always make them for special occasions, but it’s so expensive, and so I made these shrimp cakes, and they were so good, and so inexpensive, and I was like, gosh, these are just amazing and fun. They are so good. That will be the one thing I love right now.

Follow Fanny on her blog, and order Orange, Lavender and Figs at
Fanny Slater | Get Your Fanny in the Kitchen
Find Fanny on Instagram, too: fannyslater

More from one of our favorite Wilmington cooks: Fanny Slater on Southern-style barbecue