Missed it? Didn’t hear about it until you saw the rave reviews on Facebook? You know you missed something – something of note – but, what was it?

It was that pop-up restaurant: it opened in the blink of an eye, and was gone just as quickly.

A pop-up restaurant is a temporary establishment, which operates from unique, non-traditional restaurant space. Think warehouse, unoccupied loft, or former factory. A pop-up restaurant can also happen in a private residence, in a restaurant at a time that it is usually closed, or during a festival or street market.

The ultimate experience for foodies, a pop-up restaurant is usually the brainchild of a well-known chef. Restaurant owners, food creators, brands, and wineries and breweries can also host pop-up restaurants. As you can imagine, planning, promoting and implementing a pop-up can be a prodigious project – not to mention a potentially expensive endeavor. Pop-ups generally come off with set menus, and tickets are often sold in advance. The goal is to sell out, far enough in advance for the chef to purchase product and execute the menu.

To stage a pop-up, a venue must be secured, food ordered, and staff confirmed. Pop-ups are often friend- and connection-driven. The host chef calls in favors, recruits colleagues, shops creatively and frugally, and calls upon a social network to promote the event. If social media chops can’t turn out a crowd, the host is out-of-pocket on expenses for the event; with a pop-up restaurant, there is no “take two.” Spreading the word is integral to pop-up success.

Sounds daunting, right? If you are not a true food pro, it is. But, there is huge appeal to inventing and creating a food event.

Hosting a pop-up offers professional cooks the opportunity to try new recipes, create an unusual and one-of-kind menu, and give back to his or her social media followers.

“I love the challenge,” says Chef Jeffrey Porter, owner of Port City Pop-ups. Porter has been hosting pop-ups in Wilmington since 2011. “I’ve done over 20 pop-ups. I love working with both local ingredients and other local chefs. Most chefs do it once and never want to do it again because of the stress level. But pop-ups make me a stronger, more versatile chef. They make other big events so much easier for me because I’m constantly pushing my skills at each one of my pop-ups.”

A pop-up restaurant is the perfect venue for stepping out of the box. Chefs from different restaurants can collaborate on a one-night event. A chef can try out new recipes, be creative, or work on a theme that diverges from their regular gig.

No matter how minutely managed, a pop-up always has a component of being a culinary experiment – and that’s what makes it a sought-after experience for foodies. A pop-up is a chef’s opportunity to hold a dinner for his or her own throng of fans. Pop-ups are often intimate affairs, and foodies can watch the chef in action, chat with fellow food aficionados, and often socialize with the chef when courses are served, or after the event. A pop-up restaurant is truly the ultimate insider dining experience. 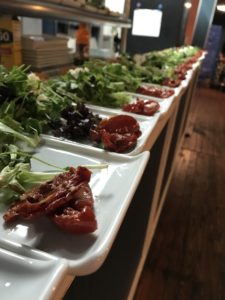 Chef Porter, who has staged pop-ups in the restaurants on nights when they are closed, in a loft space, and the parking lot of a local bar, also uses the pop-up concept to combine ticket sales with fundraising. Many of Port City Pop-up events have a charity beneficiary. “I love giving back, so most of my pop-ups are for charities,” says Porter. “The two go together, and it helps spread the word.”

How do you find a pop-up?

Follow your favorite restaurants, and their chefs, on social media, especially Facebook and Twitter. Send friend requests to chefs whose cooking you admire. Join local dining groups on Meetup. Stay tuned in to what’s going on in your local food scene.