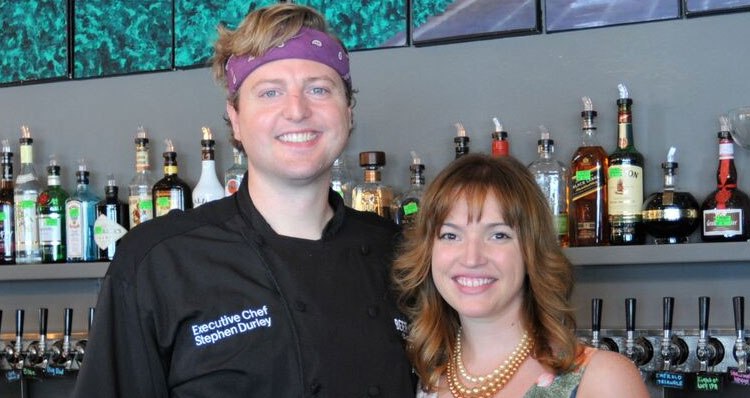 Stephen and Hayley mesh their wheelhouses at the restaurant, with Hayley managing more than 30 beer offerings on tap and Stephen in the kitchen creating a Mexi-Southern fusion for diners.

Stephen: One year is a big deal – nine out of ten restaurants fail in the first year. We opened in June of last year. We’re at 15 months. That’s a big milestone, getting through that first year. We came down here from NYC. We did a nationwide searc 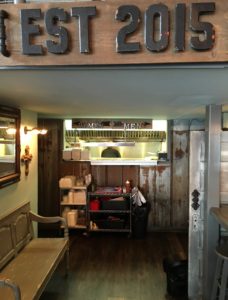 h, and narrowed it down to all the criteria we were searching for.

Hayley: I did most of the initial searching. We decided we wanted to stay on the coast – the East Coast specifically – and looked from the Norfolk, Virginia, area, all the way down to Savannah. We wanted to have some seasons, so we didn’t go as far south as Florida. We did a road trip then, and it was a clear winner when we got to Wilmington. We love the weather here. There’s a year-round community, but still an influx of tourists. There’s so much development here right now, the beer scene especially is so up-and-coming, and we wanted to be part of that.

Stephen’s a beer lover. And I’m a foodie. It overlaps very well.

Stephen: We’re home brewers as well. We’ve been doing home brewing since 2010. That’s a real collaboration of both of our brains. She writes the recipes and then I figure out how to brew it. We worked together at DBGB [Kitchen and Bar in NYC] – Daniel Boulud’s American sausage-and-beer bistro.

Hayley: We worked there about a year-and-a-half together. Then we worked apart for about a year, and then we collaborated again at TapRoom 307. He was the chef and I was the general manager and beer sommelier. I was there for four years; he was there for three. We really prefer working together. We do a lot of long hours, so it really helps when we can see each other all day. 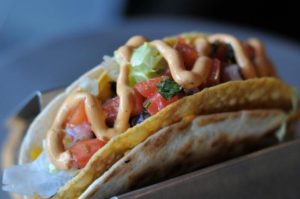 Stephen: We call this Southern-Mexican fusion. We had never done it before.

Hayley: We like to do some Southern favorites. Like our amazing catfish hush puppies, and our take on a po’ boy. And we have buffalo wings on there, even though it’s not technically Southern, it’s a American favorite.

Stephen: We wanted to keep it fun. We wanted to have Mexican food be the base and then at the same time bring in a lot of Southern influence. Like the tacos: pulled pork tacos. When I was developing the recipes, I tried Memphis-style barbeque sauce, and South Carolina and Western Carolina sauce… and then the classic vinegar sauce. Hands-down, the vinegar sauce was the best on our taco. And it’s so perfect for here, too, because this is where it is from.

Hayley: When we were coming up with the concept, for a restaurant launch in the downtown community, there weren’t any Mexican restaurants. None had opened yet. So we wanted to unique, we didn’t want to be the next burger and fries kind of place. There are a lot of those, and while we can do that well, we didn’t want to infringe on really successful restaurants that are already here.

We wanted to be part of the community. We didn’t want to come in as a competitor. I mean, we are selling food at the end of the day, so we are competing, but we wanted to do something a bit different, and not step on anybody’s toes. We wanted to get to know the community and be a part of it and be very supportive of the whole downtown restaurant scene.

When we were visiting Wilmington, there was a free evening we had, and I said, let’s go out for margaritas and gauc, and talk about the three concepts we had in mind, and there wasn’t a place to get margaritas and gauc. So I said, well, that’s it. The decision was made – and that was our leading concept anyway. Then when there really wasn’t anywhere to get a frozen margarita and guacamole downtown, I was like that does it!

Stephen: We didn’t have any specific Mexican food experience, so that’s why when we were 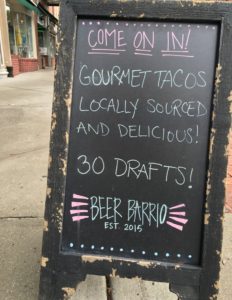 developing the menu concept we decided to have a bit of fun. Beer Barrio is not traditional…

Stephen: It’s about trying to create classic Mexican dishes, but coming up with our own take.

Hayley: We have 30 beers on draft. We invested a lot into our beer system. I know there are a lot of great beer restaurants in town, but none of them have as many drafts as we do, and I wanted to feature that – my background is running beer bars. So I really wanted to feature an extensive draft selection. That’s really at the forefront of what we’re doing. And Stephen cooks with all the beer as well.

Stephen: I bring as much craft beer into the kitchen and cook with it as I can, which I think is one of the newest trends in craft beer bars and restaurants. We work really well together. There is no one I trust more than Hayley. We both play to each others strengths.

Hayley: There’s a lot of trust in our dynamic, the way we work together. If I’m like, why are we doing it that way, why did we try this, if he tells me yes or no, I trust that.