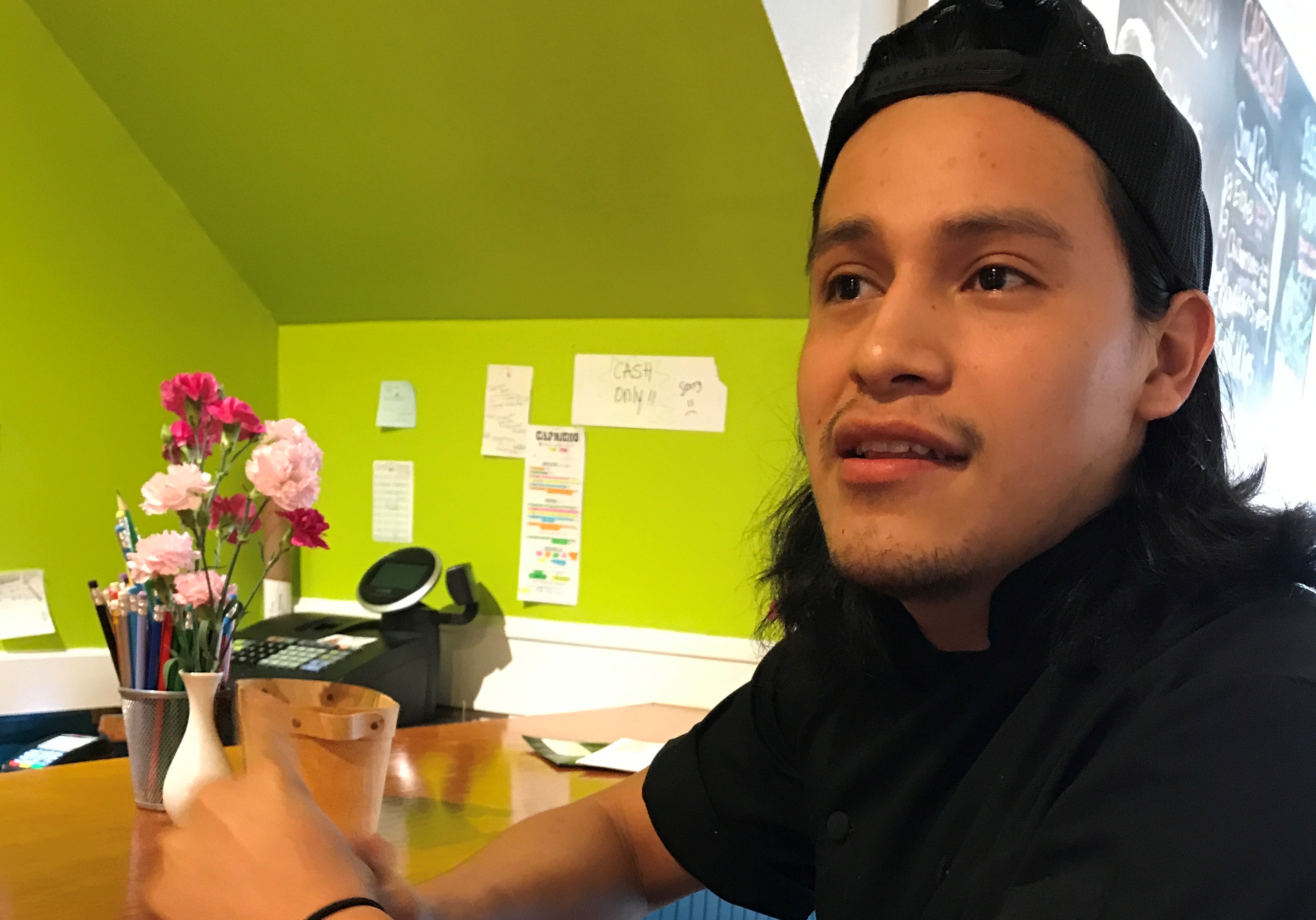 “People don’t understand how the kitchen will eat you up. I’ve worked with hundreds of people, from dishwasher to line cook, and they didn’t make it. If you have to be willing to put down the hours, your sweat, your tears, and it will show.“

I was lead cook at Dixie Grill. While Chef Porter was managing everybody, I was line cooking and handling everybody else. Now that I’m here, that went away a little bit, but I’m actually working there

on Sundays. For right now, I’m doing both. Everyone over at Dixie is like a second family to me. I hear everything that goes on there too. So, I’m just going over there to crack the whip… [laughing] but especially to say hi to them.

The Heat in the Kitchen

Before the Dixie, I was working with my mom and dad at the White Front. That was my first job. My brother was working as a dishwasher. He went to college – he was the one from the family that actually was able to go to college – after he left, they needed someone to help, so I was like, I’ll come help. I get to see my mom everyday… I get to eat… that was a 100% bonus right there. My mom taught me how to really work. My dad did too. I worked hard, as just a straight dishwasher. From there, I went to the owner’s second restaurant, the College Diner, and I worked third shift, 11pm to 7am. I wasn’t used to that, time to wake up and go to sleep was all crazy. 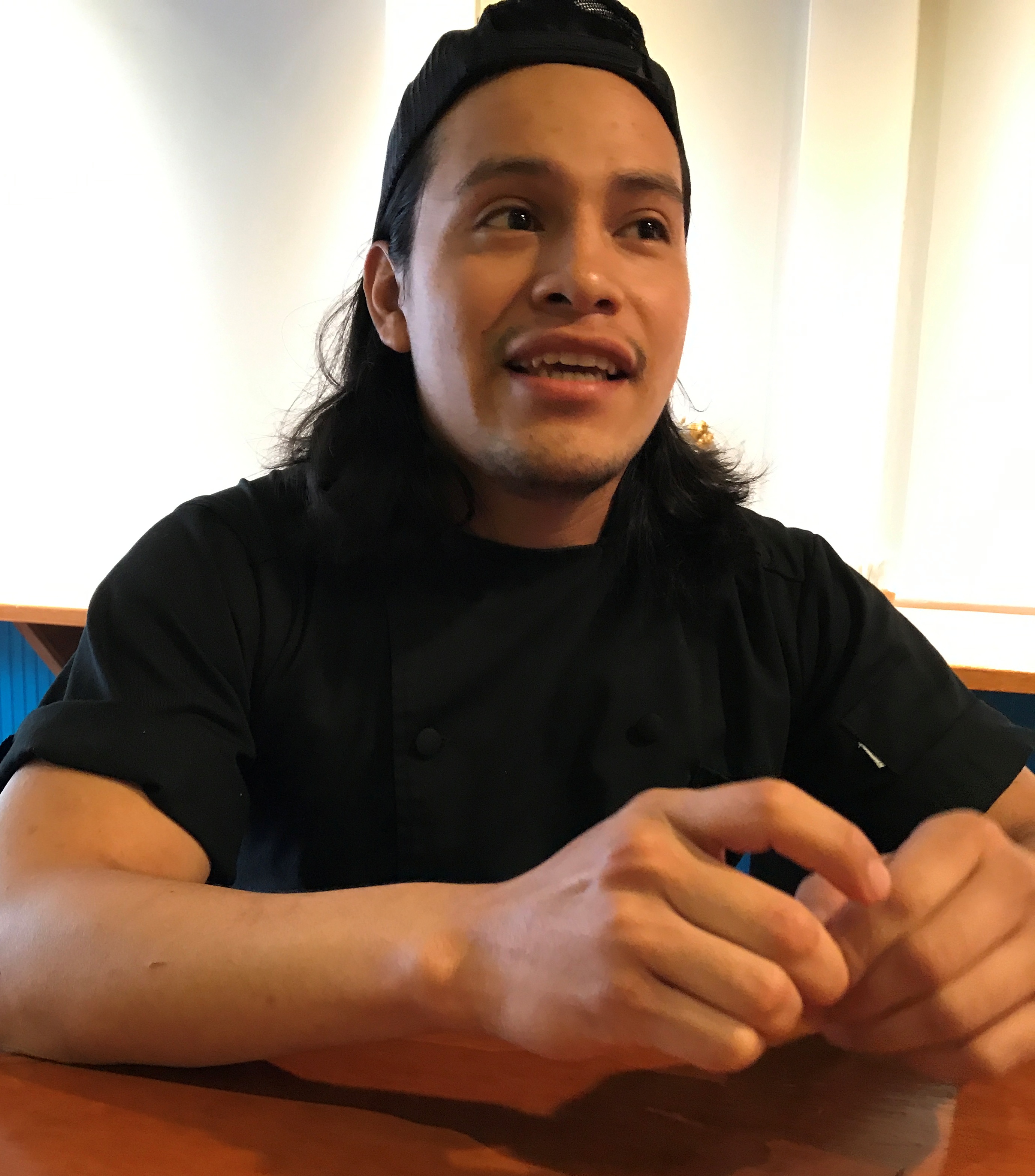 My younger brother was working with Brian Mayberry at Dixie, and he was like, “Hey, we need a dishwasher over here, are you willing to come over?” and I was like, “yeah, I’ll give it a shot.” I was so nervous. It was getting out of my comfort zone. It was extremely hard for me, when I was talking to Brian the first time, and I was nervous, but he said, “do you want to work?” and I was like, “Yes, I want to work, I’ll prove it to you.”

Six months after working there, Brian asked if I had ever picked up a knife. I was like, no… maybe a butter knife.

I had never been on the line, but my brother had set a standard for me that I had never even dreamed about. It was nerve-wracking. I never had a dream to be a chef. It just kind of landed on me. At first I just wanted to quit. I hated it so much. People were yelling at me, and expecting me to know things that I had never been taught, and screaming – especially my younger brother! – but I’m most grateful for being pushed. My younger brother taught me a lot, everything… like using a knife to cut mushrooms. I was very slow. He was like, I want to hear that knife chopping in half a second at a time. And I was like, what are you talking about. That kept me going. I just practiced. People pushed me, and I kept going. Brian was making food, and I was watching everything.

I fell in love with making food. But it was gradual. And I learned how make food by seeing what Brian could make just using random stuff. And I was always hungry, so I was willing to eat. It just clicked for me. I was like, I want to be able to do that, to come up with something out of the blue, in just two seconds. That’s what Brian Mayberry and Jeffrey Porter can do, and that’s what I would love to be able to do. That’s how I fell into it. 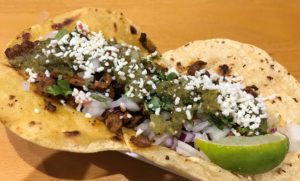 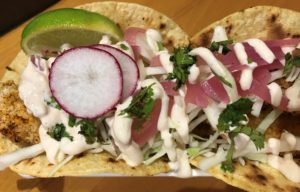 Coming over here was fun. Whenever we are slow, I just grab random ingredients and it’s literally like Cooking 1o1. We’re cooking random dishes. It’s honestly about learning how to do the things I don’t know how to do. I don’t want to be able to do just one type of dish. All I was comfortable doing was breakfast stuff. Here, it’s tacos, and lunch stuff.

Brian made the first ideas for Capricho. Then we combined all our ideas, putting together the menu, and deciding what things went with what. There always kinks to work out, but that’s the only way to improve. At lunch, we have a line out the door, which is great. We are so busy, and getting everything right is a learning process.

I want to learn how to make pastas, fresh noodles. All that stuff. Pasta, for sure, is my favorite thing to cook. My dad has been making meals for as long as I can remember, and pasta is one of the things we eat most often at home. He makes his own pasta – he’d buy boxed pasta – but everything else was fresh. He’d make chicken parm, meatballs, anything you think of. His lasagna was always fresh. I would love to cook like that. I just bought my own pasta maker. I spend hours just playing around. It’s just… it’s my comfort food because it brings back all my family memories.

Driven to Be Make It

There’s so much more that I want to do. Capricho is training for me. I am learning to do everything so one day I can do whatever I want.

As long my family is in Wilmington, I’m staying here. I am a DACA. If I lose that, it takes away my work permit. I just renewed my DACA status, so I fall into the 2019 section. If things stay the way they are now, I don’t qualify to get renewed. If that happens, I lose everything I have. I grew up here… we’ve been here since I was a little. My family is from Oaxaca, my mom was carrying me when she crossed the border. My second oldest brother went to college, he got so many scholarships, and he is the one who ‘made it.’ And I found my place, too. That’s the one thing that I always do: I push myself to be something. My other brother is an artist, his resume goes on for pages. My younger brother is the fighter, the boxer. I was always the third brother, I wasn’t anything, but now I am the ‘brother who cooks,’ I’m the chef. My identity finally made it.

Check out Chef Santos Martinez’ menu and Capricho on YELP