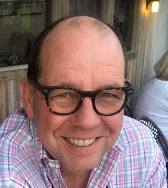 Kirk Pugh, creator of the Tasty Tuesday video series, is a hospitality professional turned real estate broker and investor. Originally from Louisville, Kentucky, he has made Wilmington NC his home since 2002.

Kirk spent his early career with corporate chains such as TGIFriday’s and Ruby Tuesday. He owned and operated a group of restaurants in Louisville, Kentucky through the mid ‘90’s, including a fine dining restaurant, a casual neighborhood eatery, two diners, and a sports bar and grill.

Later in his hospitality career he moved into the Resort Property field, as Food & Beverage Director at the Ocean Reef Club in Key Largo, Florida, and the Cloister Hotel and Resort in Sea Island, Georgia. Kirk then spent several years as Chief Operating Officer at Figure Eight Island Yacht Club before beginning his real estate career.

The highlights of Kirk’s culinary career include working with numerous celebrity chefs over the years, including Michele Bernstein, Marcus Samuelsson, Rocco Dispirito, Allen Susser, and Hubert DeMarais… to name a few.

It’s new in Historic Downtown Wilmington, and it’s trending. Dram Yard restaurant, at the newly rehabbed hotel property, Arrive, specializes in creative, global cuisine. Order from the tempting menu and plan on sharing: everything at Dram Yard is generously portioned. From the craft cocktails, to vegetable-based culinary creations and visually astounding seafood dishes, there is something on this foodie-centric menu for every palate. 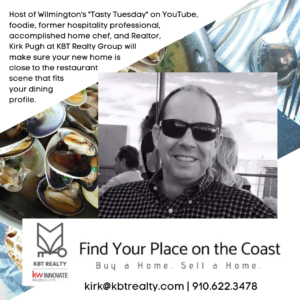 This is definitely a case when second is best! Kirk Pugh – Foodie and Real Estate Broker – ventures to the Greenfield Drive warehouse district for food and drink at the new restaurant and wine bar from the owners of Fortunate Glass: The Second Glass. The wine selection by the glass or bottle is on steroids, and the “small bites” menu is perfect for casually elegant grazing.

This episode of Tasty Tuesday is all about the water, and all about the view. And the food: mahi, Thai-style shrimp, and classic pecan pie. Kirk Pugh – Foodie, Broker, Realtor with KBT Realty Group – headed out to Crystal Pier at Wrightsville Beach for an al fresco, ocean-side dining experience at the iconic Oceanic restaurant. Newly re-modeled and now re-opened after an extensive renovation from damage during Hurricane Florence, Oceanic is passionate about sourcing local seafood on the southeastern North Carolina coast.

After a brief hiatus, Foodie Kirk Pugh is back with Tasty Tuesday and RUMCOW Wilmington, a hot new restaurant in Historic Downtown with an intriguing menu of small bites perfect for enjoying at the bar, and trendy dining for a great meal in one of the new hot spots.

END_OF_DOCUMENT_TOKEN_TO_BE_REPLACED

Foodie Kirk Pugh takes Tasty Tuesday to Roko Italian Restaurant for an elegant dining experience and some of the best Italian food in Wilmington NC.

END_OF_DOCUMENT_TOKEN_TO_BE_REPLACED

Get there however you can: boat, kayak, foot, car, golf cart, bike. At Gibby’s, the motto is “Let’s Beach,” and there are plenty of ways to do just that. Kirk catches some good grub, cold beer, and low key atmosphere at the best place to dock and dine in Carolina Beach.

Tasty little bites from the tapas menu at Circa 1922 grace this week’s Tasty Tuesday restaurant review with Kirk Pugh stopping in at Circa 1922 before hitting the galleries and the Downtown Sundown concert. We love the bar vibe at Circa, too.

Osteria Cicchetti is the go-to Italian restaurant for lots of foodies in the Cape Fear area, with big-time favorites like their flatbread pizzas, clams with white sauce, and creative seasonal specials. Join Kirk Pugh and his family for dinner out at the O.C.

Fan of spicy? Lover of curry? Head over to Big Thai in Wilmington NC for a great dine-in or take-out meal of authentic favorite dishes from Thailand. Kirk stops at Big Thai, one of his favorite Thai restaurants, for a Tasty Tuesday video.