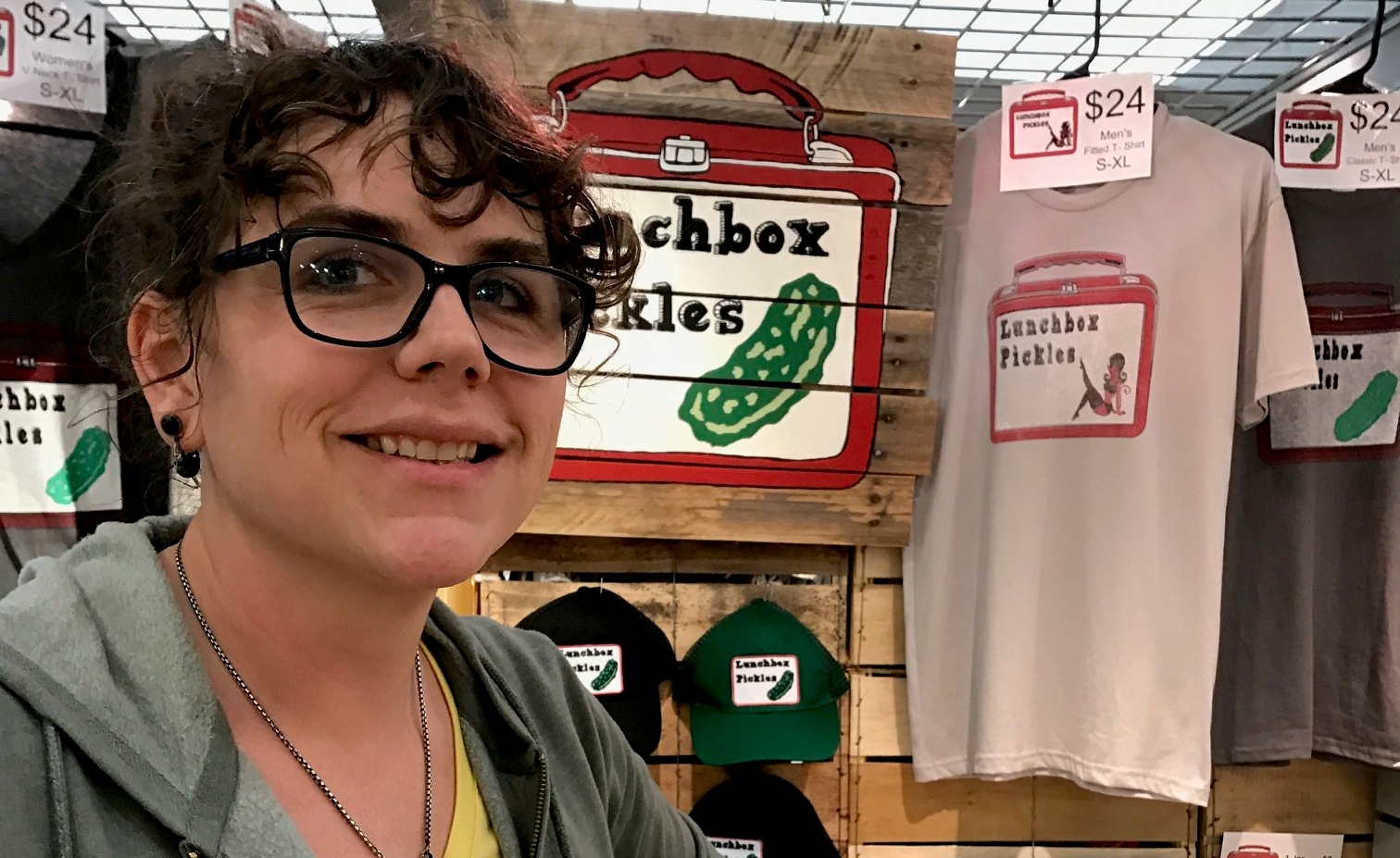 “I always need something new to do. Once I get one thing figured out, it’s time to move to something else. I love the Tuesday night-time market, seeing all the people who show up. I’m like, I guess I did something right.“

I was really inspired to start Port City Farmers Market because I wasn’t really happy with the way that some of the local farmers’ markets were running. There weren’t really any local farmers there – all their produce and meats and other products were from resellers. I don’t think that’s what it’s supposed to be about. I think it’s supposed to come directly from the growers and producers.

I started out being a member of the farmers markets because I was making and selling Lunchbox Pickles. So we had been a part of the other night time markets and they didn’t work out, but I knew there was a way to make it happen, and thought that people needed another reason to come out in the evening – like they had to be able to get a drink, too, and something to eat. It took one text message to Eve at Waterline to make that happen, and she was like, just tell us what you want to do. So within just a couple weeks, we had the first market going. It has continued to grow every week. We have the availability on the inside at Waterline, so we are going to run the market through the winter, too. It’s been really popular, and the brewery loves having us there. They are very community-oriented, and they like doing events that feature people, and music, and art.

There is no better way to sell the raw product than to show people what they can do with it. That was the whole idea in adding the cooking demonstrations. The vendors bring their stuff there, and then our guest chefs use the products in their recipes, but tone it down into something that can be sampled. It showcases what’s available at the market. It seems very simple to me.

Another one of the great parts is that the chefs have absolutely love participating. I haven’t heard anything negative. They enjoy coming out. Most of them are very well known, and it gets to expose their skills and advertise the restaurants that they are affiliated with. We’ve gone out to Carolina Beach, to Pine Valley; we’re trying to pick chefs from different parts of the county. Not just downtown chefs. We want to spread the love all around the area!

It all started with a pickle…

We had always loved pickles, and got tired of the ones from the store. Angela’s pickles were such a big thing there for awhile, then she went away. Right after that, my mom brought some pickles when she came to visit at Christmas, and I was like, anything you can do, I can do better. [laughing] I started on my own pickle recipes, and friends would try them and say, oh this is good. I did all the official processes with the Department of Agriculture, and Health Department stuff, and the process of certifying and everything, and then Lunchbox Pickles became a part of the markets. 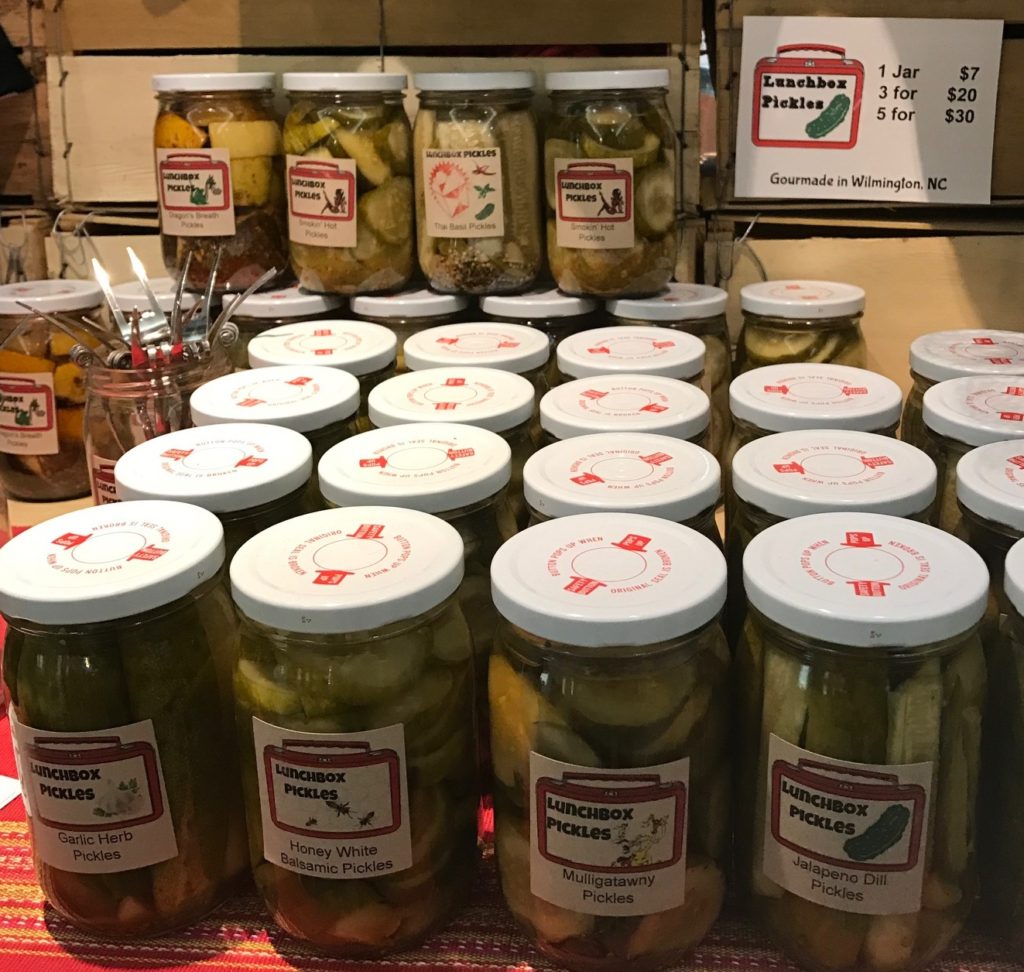 I’ve always worked in restaurants or been in a sales type job. I’m used to dealing with people. I can sell anything. I always wanted to do Lunchbox without asking for money, or doing a GoFundMe. It was one of those things that if it couldn’t make it on its own, it shouldn’t exist. If it couldn’t grow and prove itself, then I didn’t want to do it. I ask others for help a lot, but not for this. The pickle business does really, really well. It’s a good time for it. I’ve been running Lunchbox Pickles for about four years, but really seriously for about a year and a half. I’m working on being a national brand, but I really wanted it to grow small, and to be local. One of the big problems with expanding is that if you go to a national chain, they buy from you wholesale, and then undercut your prices so you can’t compete and sell in small markets. I like to sell direct to consumer; I like to hear what they like about my product. I don’t want to make millions off of it, that’s not what it’s ever been about. I just want to keep doing it because I enjoy doing it. I like making the recipes and going to the markets. I really enjoy selling what I make.

I might expand to working with sales reps that are in specific farmers markets. It could be a full-time job for someone who would enjoy doing that: go to the farmers markets in season, and then work on a few wholesale accounts off season. I also can expand in online sales. I do sell some directly through email now, but it gets busy and it’s a challenge to fulfill online sales.

Hangin’ at the mall

The Port City Farmers Market kiosk has been in the Independence Mall since October 1st. The mall is ecstatic to have us here, and they are using us to highlight that there are some local businesses in the mall. Business started slow the first month, and then it really picked up. We are actually going to keep the kiosk open, and adding a storefront for the Port City Farmers Market. 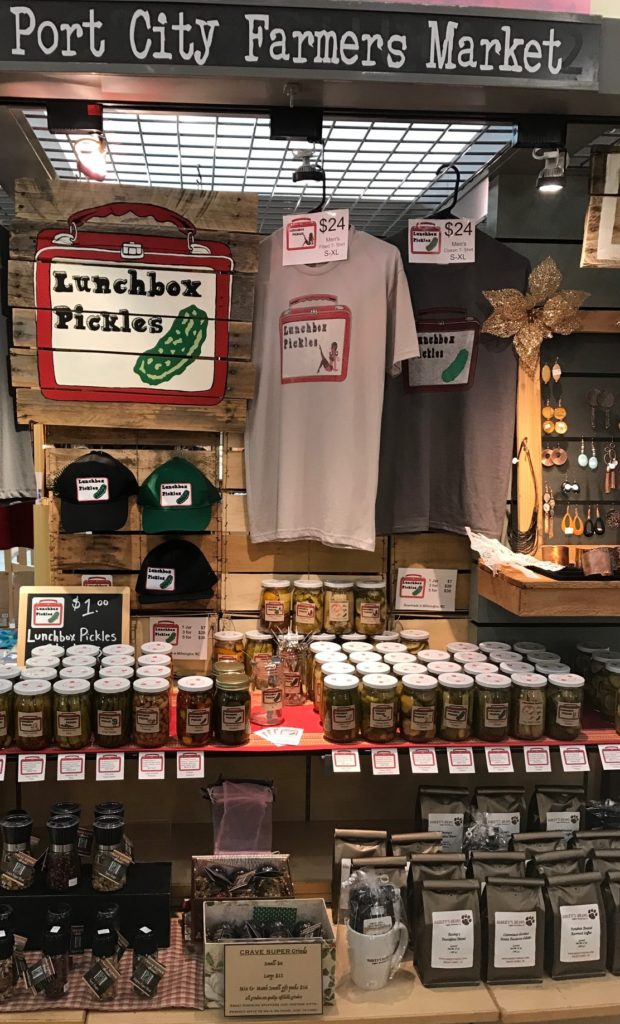 We are also opening a restaurant in the food court, that’s what Sam Cahoon is working on right now: Port City Farmers’ Market Kitchen To Go. I tried to come up with the longest name I possibly could, and I still cut out a few words… Sam’s developing the menu and the concept.

The restaurant is going to be as much local as possible. It’s going to be fast food, but it’s going to be healthy to give people another option when they are grabbing something to eat at the mall. There are lots of employees – lots of them women who don’t want fried chicken or pizza – at the mall, plus the shoppers, and I think they are ready to try something different when they want get food. It’s mostly about providing a good, healthy option.

Yes, I pretty much eat pickles every day. There might be a day when I don’t, but that probably means I ate out at restaurants for every meal. [laughing] Chimichurri is definitely my favorite, it’s really herb-heavy, with cilantro, parsley and garlic. It’s got a nice bite. And the jalapeno, that’s one that everyone loves, and we’ve gotten a lot of compliments on it, especially from other chefs. It’s clean, it’s fresh. I’m always, always, always, coming up with new ideas. I come up with a recipe and I let it roll around for a while, like three or four months, before I even do the first test batch. By that time, I’ve probably played around with herb mixtures, and vinegars, and the seasoning ideas for it, so when I do test batches, it’s like one or two test batches before I get it right. When I first started, it was more like 14 batches.

Find Jules DeBord and Port City Farmers Market on Facebook
And while you’re there, check out Lunchbox Pickles, too.