Chef Sam Cahoon | Got to Be NC Competition Dining Series

“As a chef, you have to be confident in what you do, but you have to know that there is someone doing it better. You’re all in it for the same reasons.“

I started at Cape Fear in the Hotel and Management program, took an absence for awhile, then came back and finished in the culinary department.

The lifestyle is what got me into food. When I was 16, I got into some trouble and my dad’s punishment was really simple. He said, “You’ve got to get a job.” The next day, I went to Bennigan’s where my friend’s father was a general manager, and I started washing dishes. They moved me to the pantry, and then fry side rather quickly. And I really fell in love with the lifestyle. As a 16- and 17-year-old, you’re getting together to cook food: you hang out with your friends, listen to music, meet people – meet girls – and have a lot of fun. And you get paid to do it. It really didn’t get much better at the time.

So, I worked at Bennigan’s until they closed, then I went to Fox & Hound. I was part of the corporate culture for a little bit. I went to Dockside when I was 17, that was the first independently owned restaurant I worked for. We know what Dockside is: it’s simple fried food, it’s seafood. But that’s where I saw how beautiful food could be. I’ll never forget the first time I saw Chris Jacobs grill a piece of tuna. The grill marks on it were perfect. I was just into how beautiful it was. And that’s really what inspired me in terms of seafood. When I was 20-years-old, they made me kitchen manager, so here I was, this young 20-year-old kid, with an unlimited budget, I could basically do whatever I wanted to do there, as long as it sold, so that really allowed me to experiment. James Bain was the chef at the time, and he was a great mentor. At that point in his career, he was really a little more hands-off, so it allowed me to do what I wanted, and if I ever had questions or was lacking ideas, that was a great guy to go to.

It’s all kind of fallen in place for me. You’re always needing to get better at what you do, so I wasn’t a chef right off the bat of course. It took training, and growing. But I started at a young age and from the time I was 17 until I took the job at Ceviche’s, I was working two jobs – so that kind of doubles my learning time. It was a great advantage. I’d have one learning experience during the day, and another at night. It allowed me to move around and work in a lot of places. I got a lot of experience in a very short time. 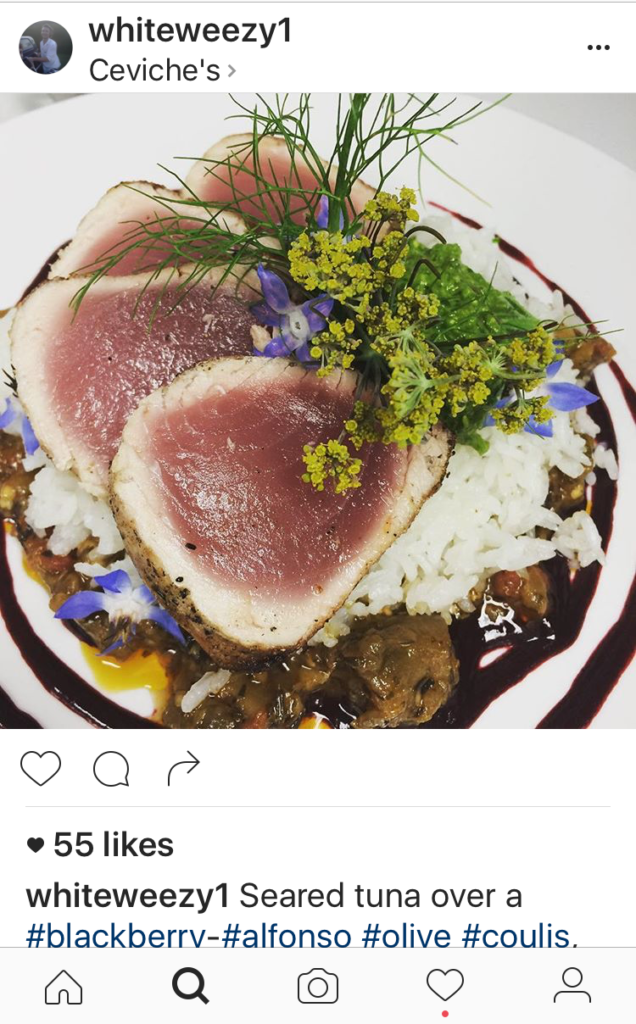 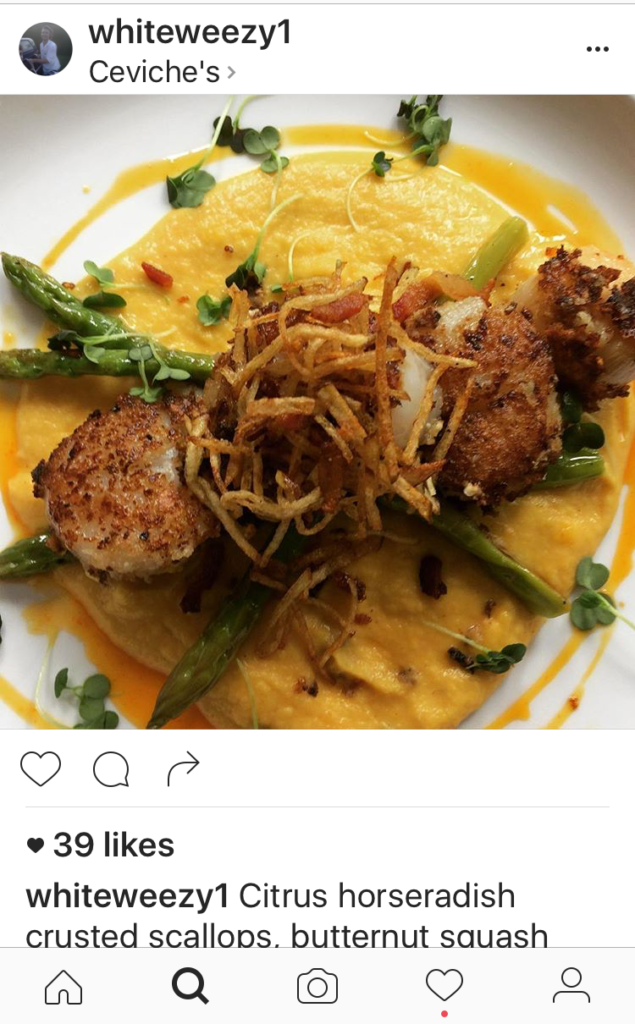 Competing in the NC

I was on the NC Competition Dining team with Edson Juarez and Eric Smith, all from Ceviche’s. Aldo was at the restaurant holding that down for me so we could participate. I’ve known Aldo since we were thirteen. He got me the job at Artisan Grill when they were here, and he came back from LA to help me start at Ceviche’s. So he’s at the restaurant, and we can take a team to the competition. Honestly, the thing about competing is the bragging rights. I mean, I’m from Wilmington, and now I can say I’m the champion of Wilmington. They’ve had the competition here for four years, and in those four years, there was never a restaurant chef from Wilmington that took it. There was a guy from Morehead City, then a guy from New Bern, then last year was the guy from the country club, and they were all good, I’m not discounting any of them, but it felt good for a Wilmington-Wrightsville Beach based team to win it.

Training? You study. You read books. There’s only so much you can do because you don’t know what the ingredients are going to be. For me, what I’ve found, is that it’s good not to get too much into studying, because then your mind is going to get set, and into formulating recipes, and having ideas that don’t let you be flexible.

You go in… and it’s not what you were reading about at all.

So, just go in and do what you know. That’s what works. You don’t pull out the bells and whistles for this. You stick with what you do best. You execute that well. You incorporate all the ingredients well.

Doing what he knows

I know seafood really well. I know Latin really well. And, I know Southern really well – I was born and raised in Wilmington. So, the first round in Competition NC, they gave us tuna and shrimp. Well, tuna and shrimp are something I know how to do really well. I work with them every day. They also gave us two kinds of miso, and poblanos, and strawberries. Well, I use poblanos and strawberries every day too. Miso, I was familiar with. The last round, they gave us sweet potatoes and country ham. Well, I work with sweet potatoes every single day – I can show you a million things to do with sweet potatoes you’ve probably never even thought of. You give me that… I’m just going to roll with it.

You get a game plan. I knew the kitchen and the layout at Bluewater Grill, and the equipment, so we were good, out of the gate. 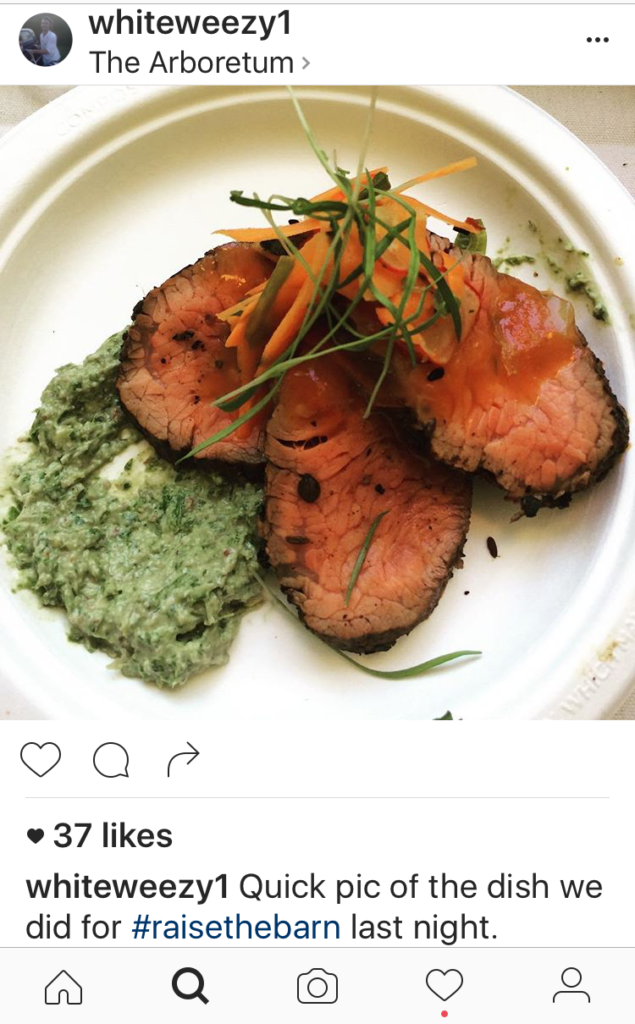 We’ve got Raleigh, November 12th, for the Got to Be NC Competition. It’s going to be fun. At the end of the day, we’re all friends. One guy might do French, one might do Italian, or Asian, but we’re all in the same game. We’re all chefs. We just have a good time with it. And we’re in it for each other.

I’m helping out with Jeff Porter’s Port City-Pop event, too. I’m going to be cooking with the other chefs, and having fun.

Then, I’ll see what I want to do next. I’ve got a lot of ideas, so there’s more to come.