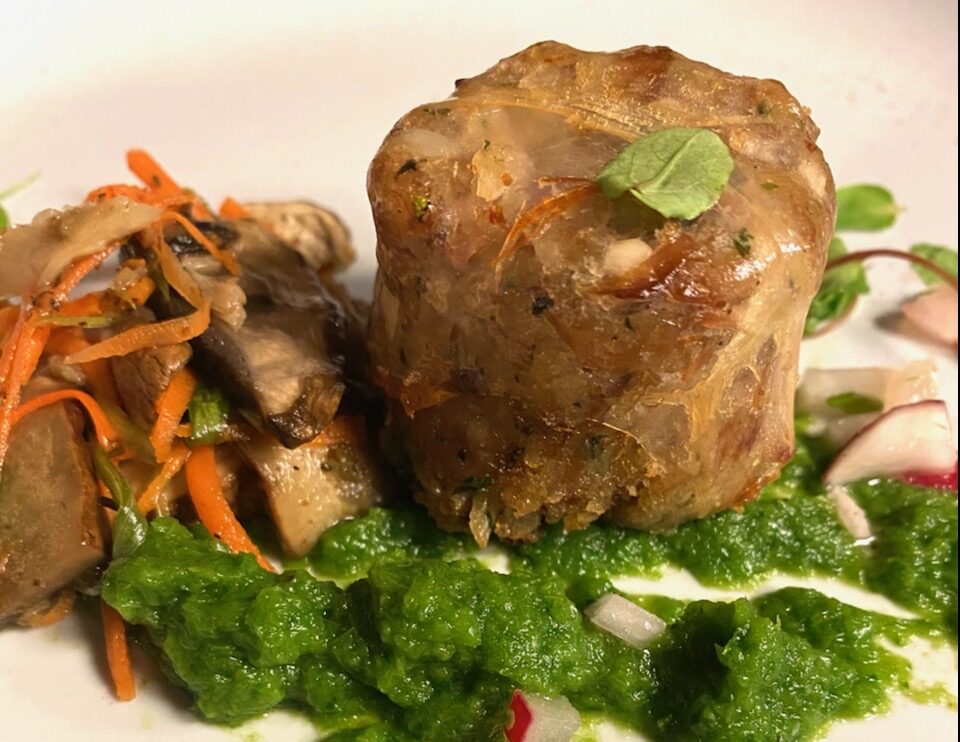 Cast Iron Kitchen and Chef Josh Petty have changed the way the Port City thinks of breakfast and brunch but when they team up with Master Blend Family Farms for a “High and Low on the Hog” dinner, you KNOW it’s gonna be spectacular!

Eight pork-driven courses were served and finished off with dessert (no pork) that left everyone in attendance full, happy and with a new appreciation for how diverse pork really can be when raised and prepared by those passionate about what they do. 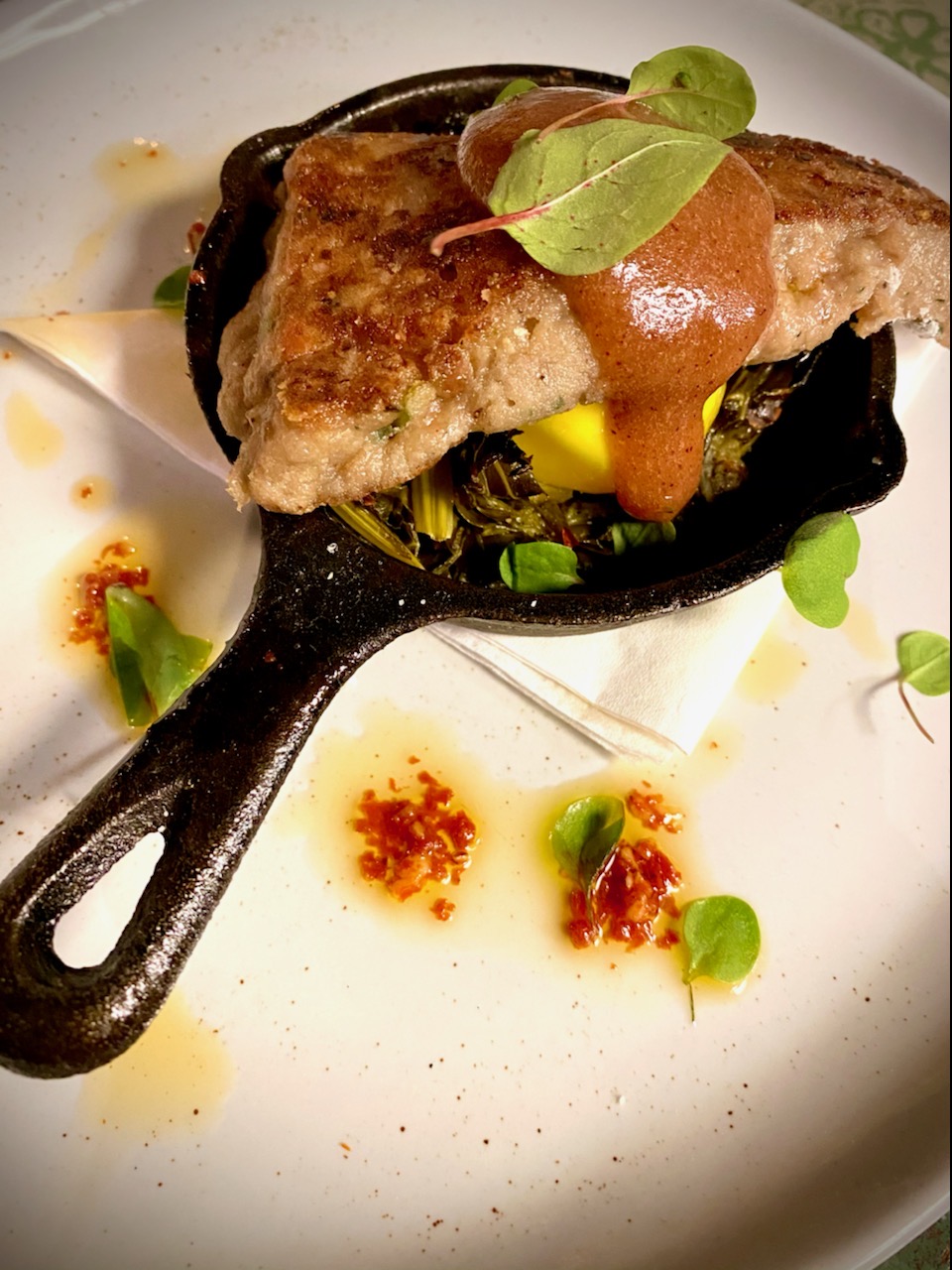 The first course was called “Egg in Purgatory” and featured spicy sausage, preserved FARMAGE Heirloom tomatoes, CHANGING WAYS FARM egg, Pecorino Romano and toast. I remember thinking that if this was just the beginning that I’d better loosen the belt and prepare for my tastebuds to be enlightened.

“Scrapple Skillet” came next and for a dish typically regarded as very low on the pork possibility scale, it was light, refined and playful, but packed a suitcase full of flavor. Fried scrapple, braised mustard greens, a baked CHANGING WAYS FARM egg yolk, garlic chili oil and savory apple butter all came together in harmony that certainly highlighted why our local farmers are so important to our heritage, economy and taste buds! 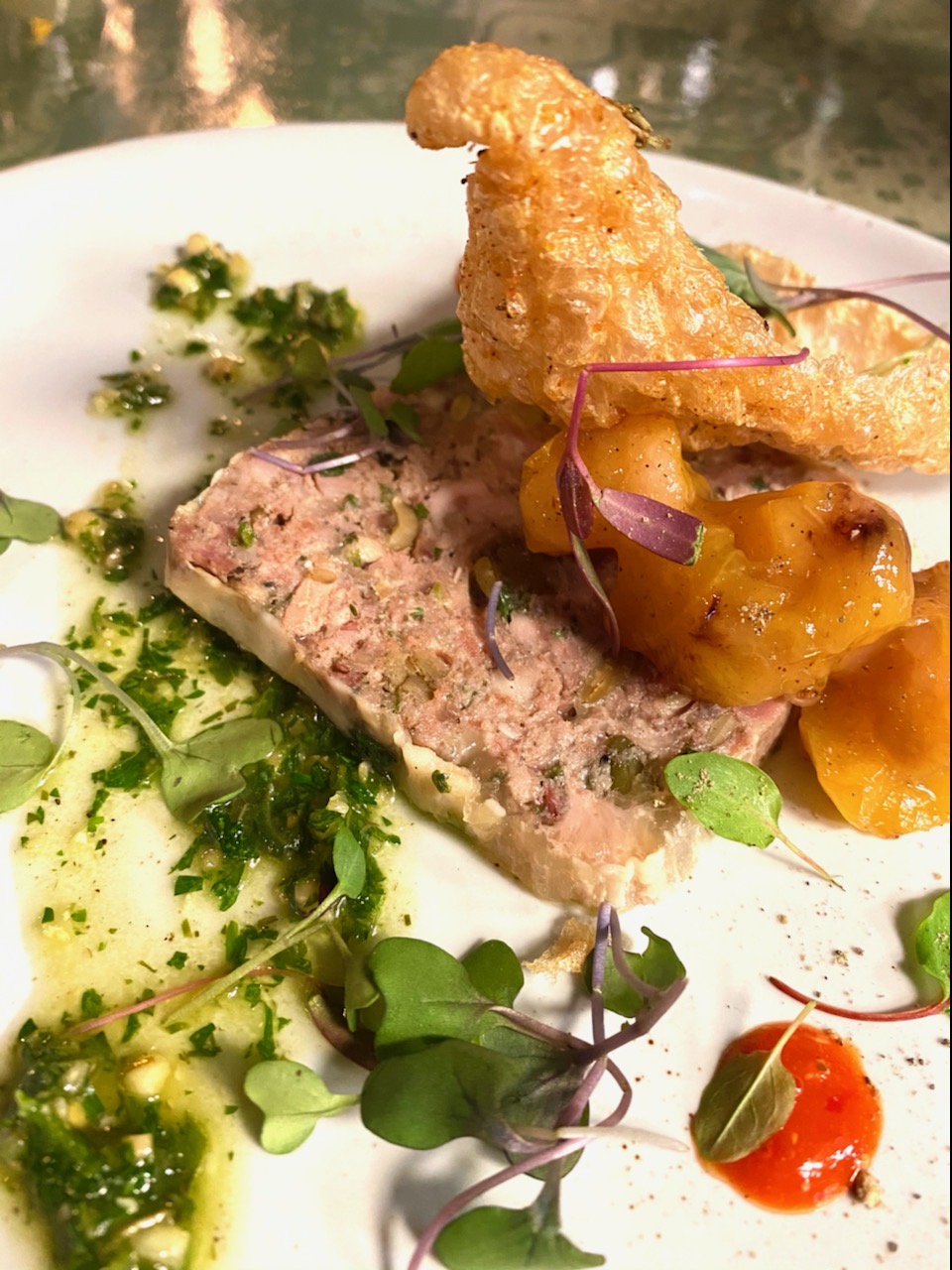 “Head to Tail Terrine” came next with charred scallion and peanut pistou, hot sauce, preserved peach and a crackling. It was a treat to the eyes and palate, creating a resounding chorus of “oohs and ahhs” when it came of the kitchen. At this point I was already thinking of pork in a new light and they were just getting started! 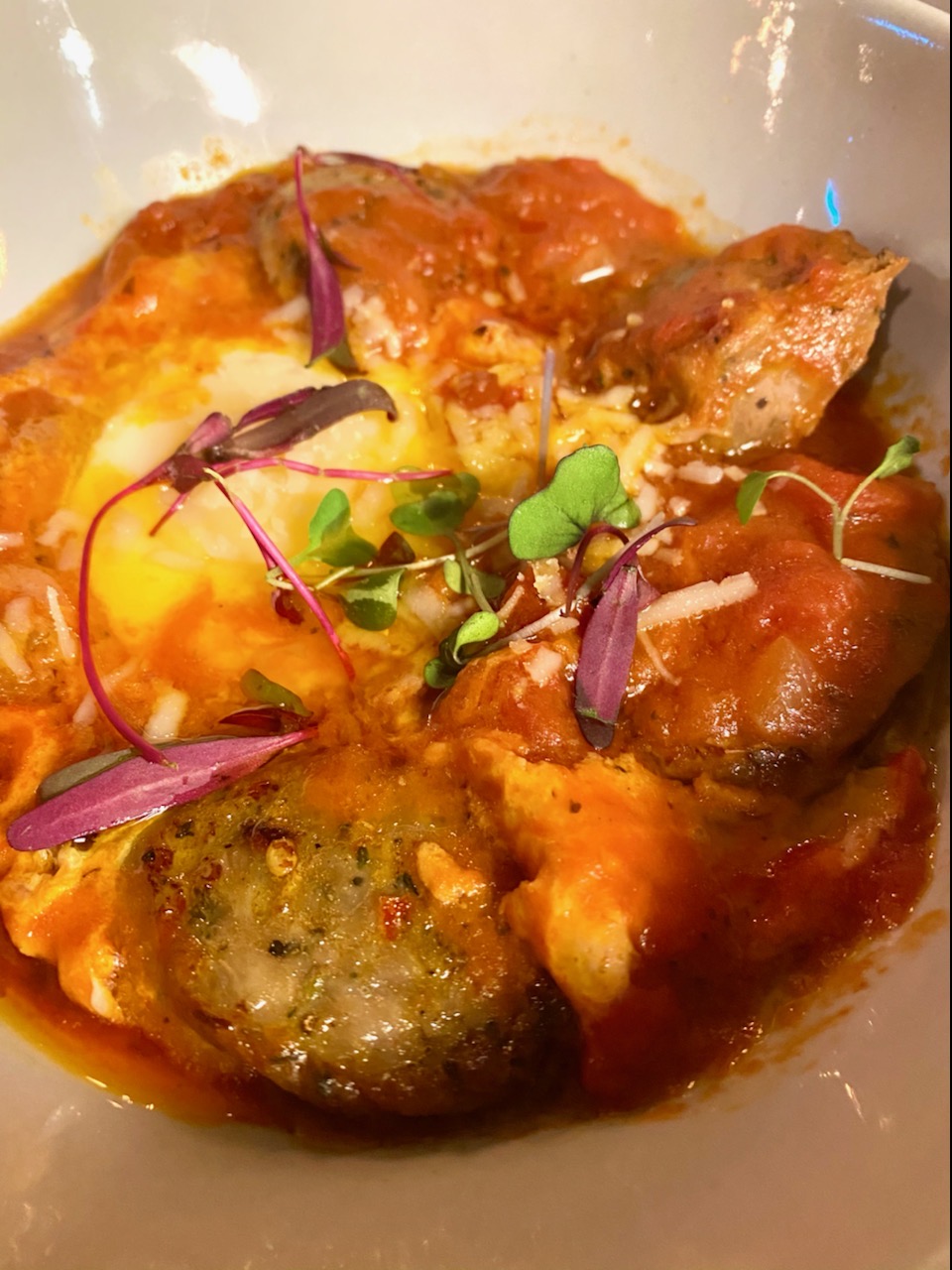 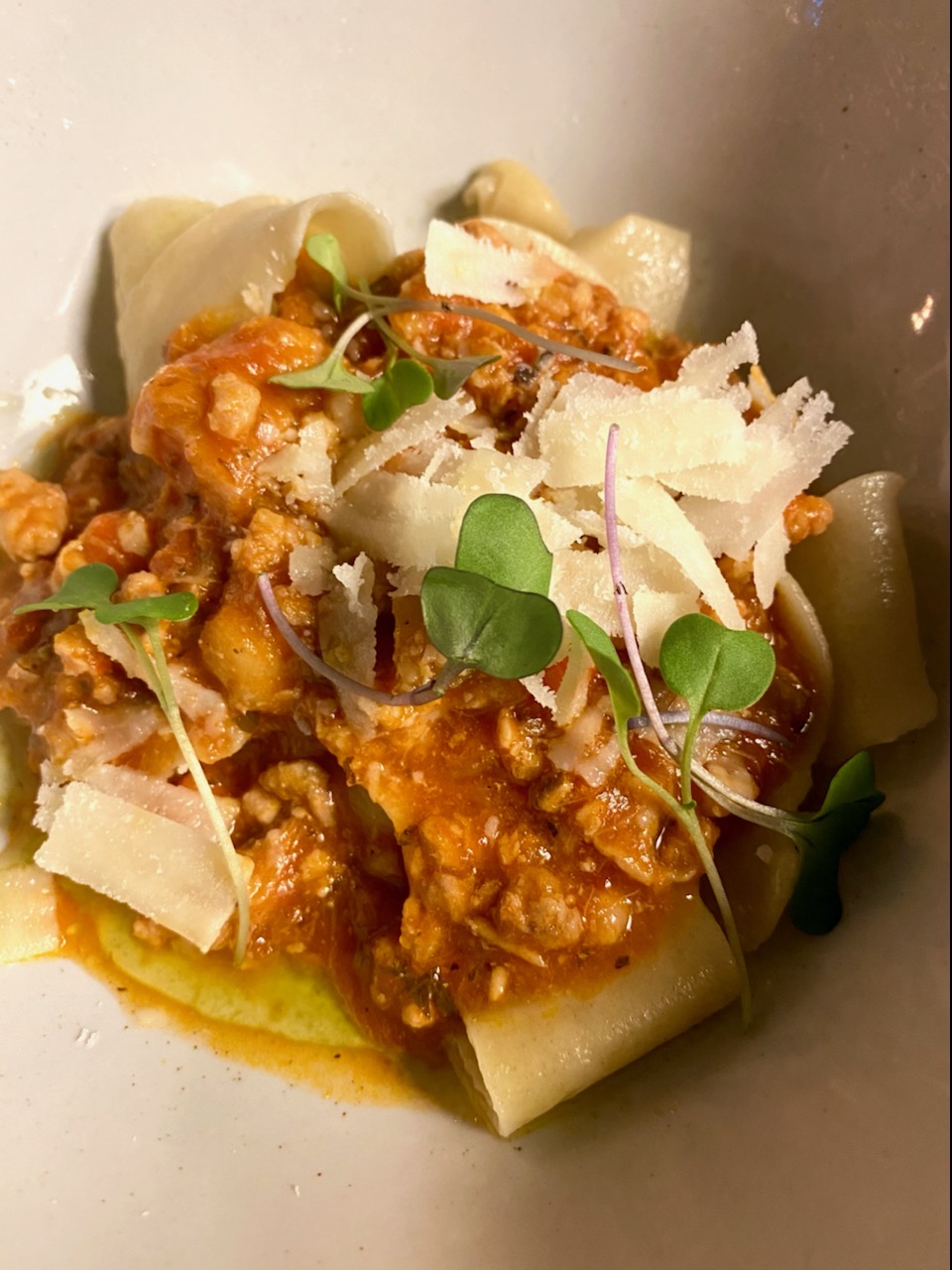 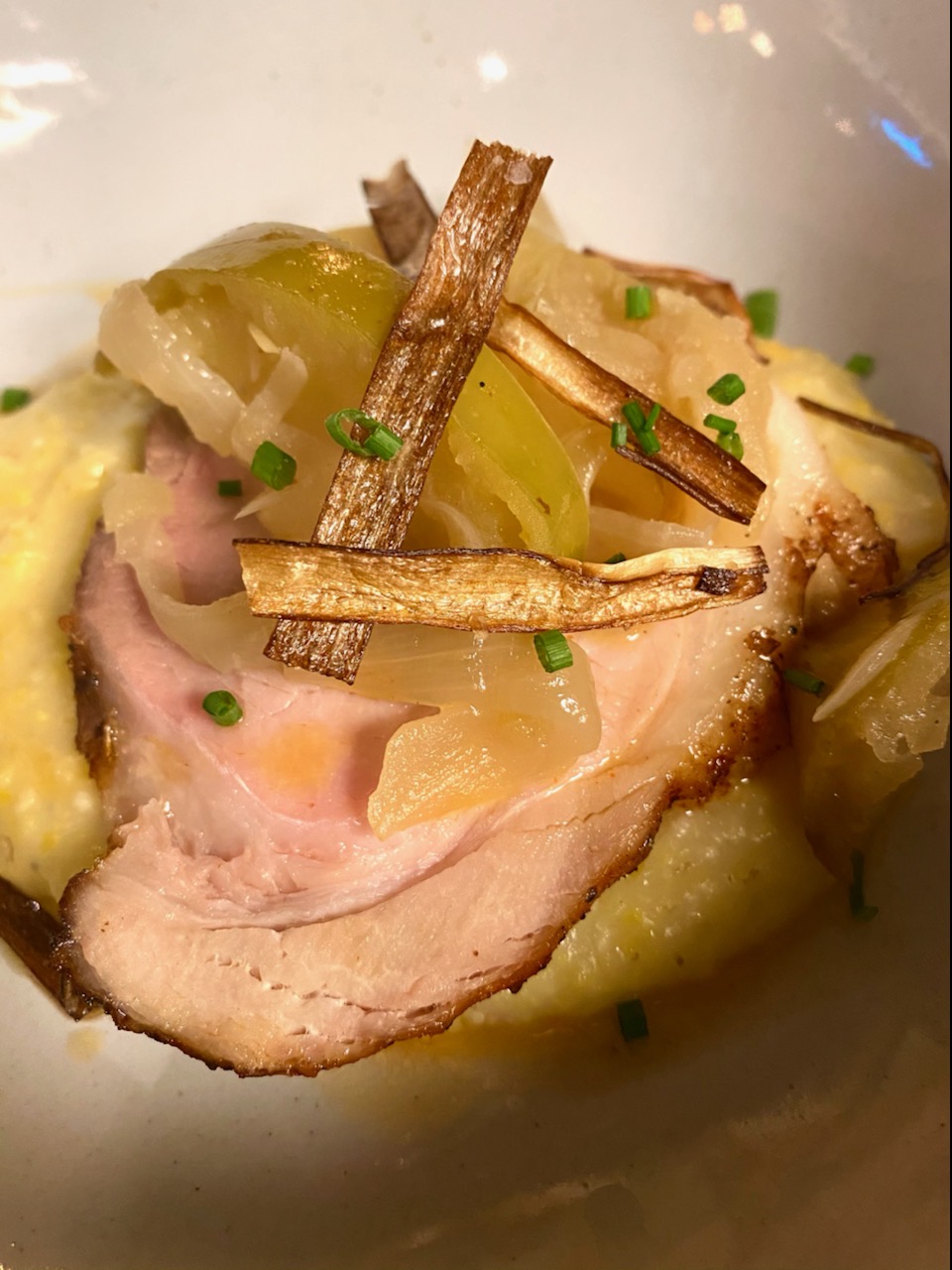 “Whole Hog Bolognese” with fresh made pappardelle could’ve ended the night and I would’ve been in culinary heaven but this was just the halfway mark!

A crispy “Pork Trotter Crepinette” with green garlic purée, pickled shiitake and radish was followed by “Slow and Low Pork Shoulder” with braised apples, carmelized onion, red chiles, and polenta. Jeez, are you kidding me? I knew from experience that Chef Petty’s skills were far beyond typical breakfast and brunch but this meal was yet another reminder why he’s a master of his trade, regardless of what meal he’s preparing. 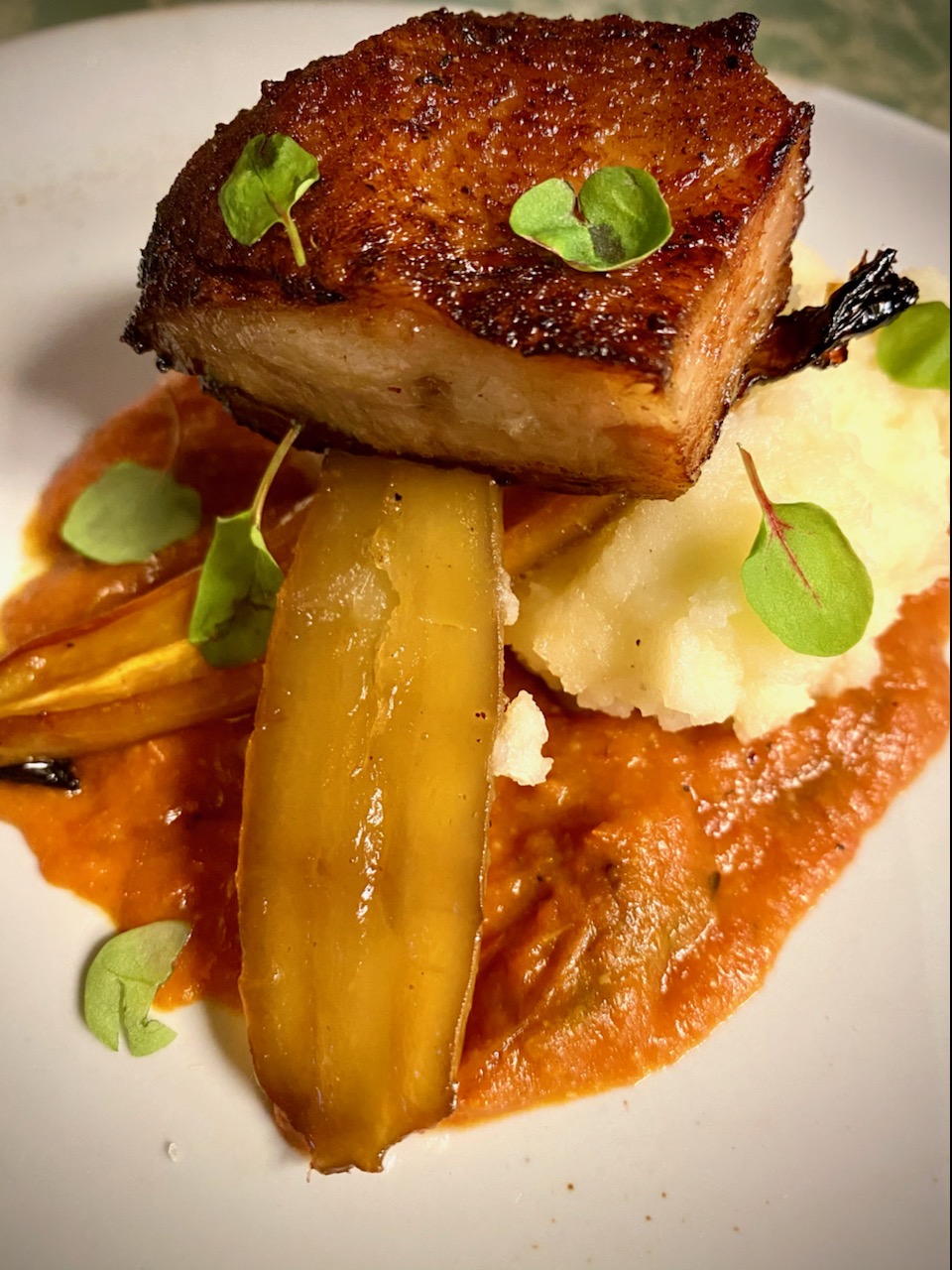 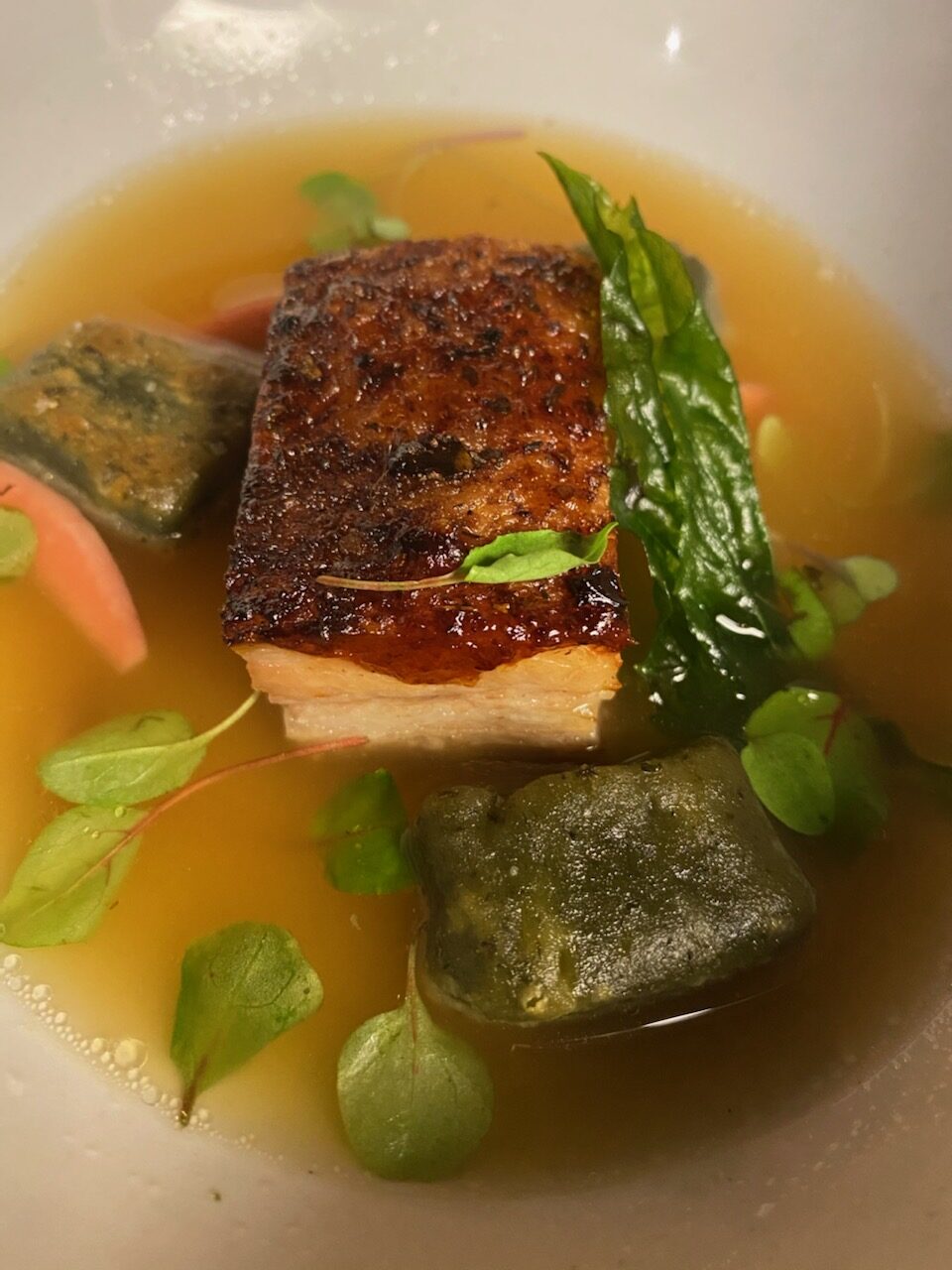 As my belt strained and my mouth watered, the table was graced by two pork belly dishes that exemplified what a truly multi-faceted ingredient it is. Charred pork belly with carrots, whipped potato and BBQ tomato gravy prepared the stage for pork belly and dumplings, served with basil gnocchi, pork broth, fried basil, wildflowers and pickled radish. 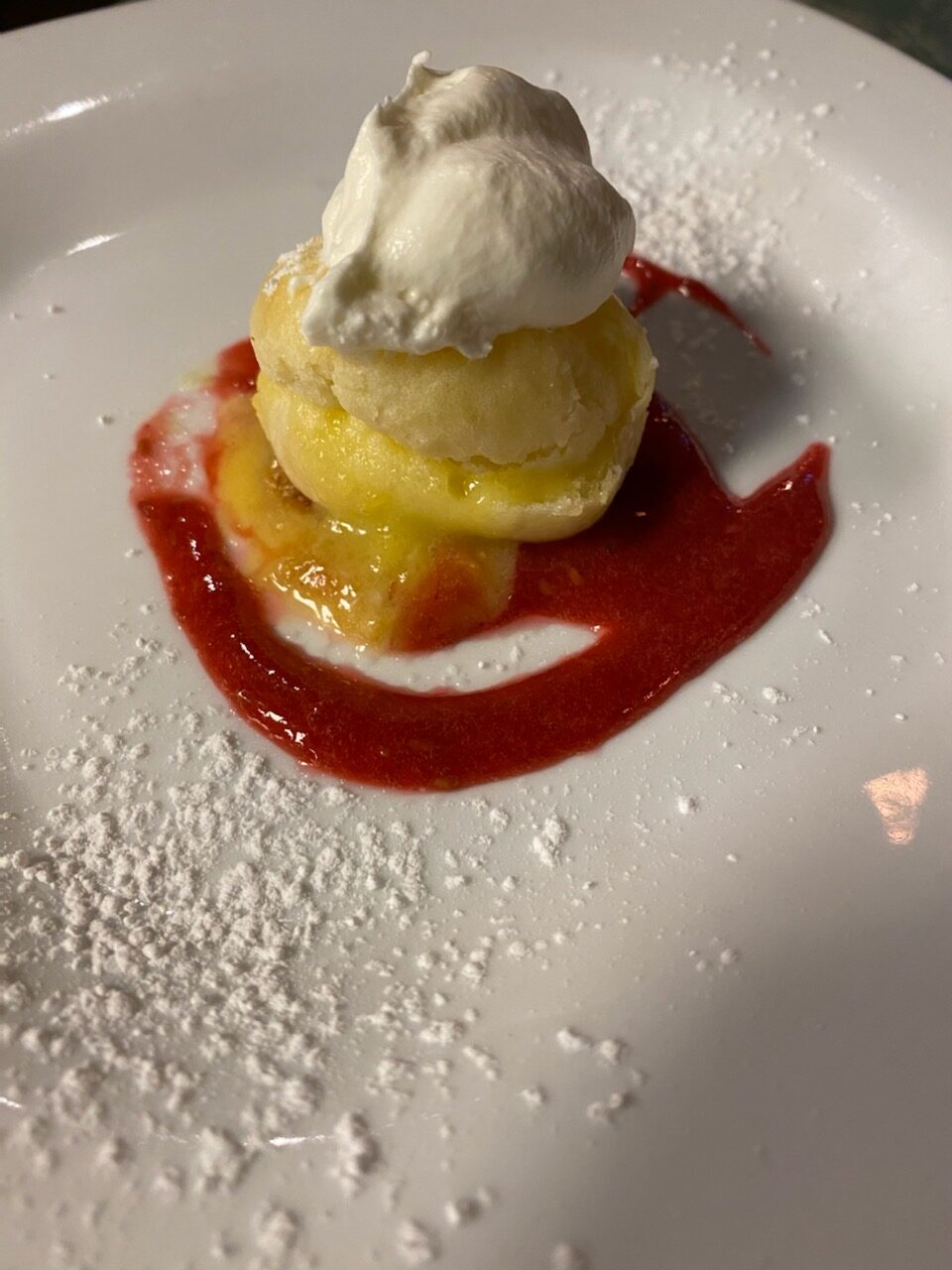 After this amazing pork cornucopia, I had not one empty centimeter of free space in my belly… until dessert arrived. Lemon Curd Profiterole with raspberry gastrique and rosemary whipped cream was the perfect, light and tasty goodbye wave to such a diverse, masterful menu.

The team of Cast Iron Kitchen and Master Blend Family Farms is nothing short of exceptional and each, in their own way, highlighted pork in a manner that I certainly won’t forget.

Keep an eye out for more Pop Up dinners at Cast Iron Kitchen and make sure you stop in for breakfast or brunch so you can taste just how good Master Blend Family Farms pork really is! 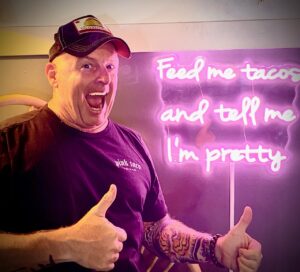 Contributing blogger: Ed Walsh grew up in Las Vegas, the son of an accomplished chef. Traipsing all over the world to more than 35 countries during a 21 year Marine Corps career allowed Ed to sample and appreciate all types of food from grass hut family dining to Michelin star rated fine dining restaurants. “I know my way around a dinner plate and I just like what I like,” he says. Asked what his absolute favorite dish from all of his international travels was, Ed quickly says it was his Mom’s spaghetti. Ed considers tacos to be his spirit animal and enjoys long romantic walks to the taco truck. He also loves spending time with awesome food almost as much as he enjoys spending time with his awesome kids.