“With six kids, we were a grab-and-go family when it came to food. Great beef jerky was always in our cupboards, and it’s the first thing our kids wanted in their sports bags.“

Do What You Love (to eat)

I like to cook, but we have six kids, and they all have played different sports, at different times, so really our life is rush, rush, rush. That’s why we’ve always loved beef jerky.

Wilmington Beef Jerky is part of a franchise, which is based out of Tennessee. There are about 110 throughout the nation, four in Myrtle Beach, two in Kitty Hawk, and one in Greensboro. Three or four in Asheville. They are all over the place.

Beef Jerky is what sold us on this franchise. Me and my husband had six children, four of them boys who are 17 to 24 now. They played football and travel baseball their whole lives. So beef jerky is something we ate at tournaments. It’s something you grab and put in the travel bag because you don’t know how long you’re going to be there. 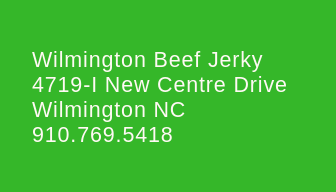 We were on a retreat and wandered into one of the Beef Jerky Outlet (BJO) stores. We were like, “Our kids would love this store.” Then we started looking into the franchise opportunity. It’s really – since we’ve bought into it – the franchise has really grown. It used to be just beef jerky and hot sauces. That was the base of the inventory when they started eight years ago.

The two jerkies that we sell are made by our company. We only sell what is made for us. One company is up north in Michigan; it’s smoked, and it’s a thicker cut which makes a tender jerky. I love it. Traditional North Carolina jerky is dehydrated, and is more chewy and kind of tough. That jerky manufacturer is in Tennessee. The factories are unique to BJO, and they only sell what they make to their own franchises.

Our jerky is all American-made, American-packaged, and American-distributed. Most of the commercial jerky you buy may say “Made in America,” but it is just packaged here, not actually MADE here. That meat is imported from South America; it’s not American beef. 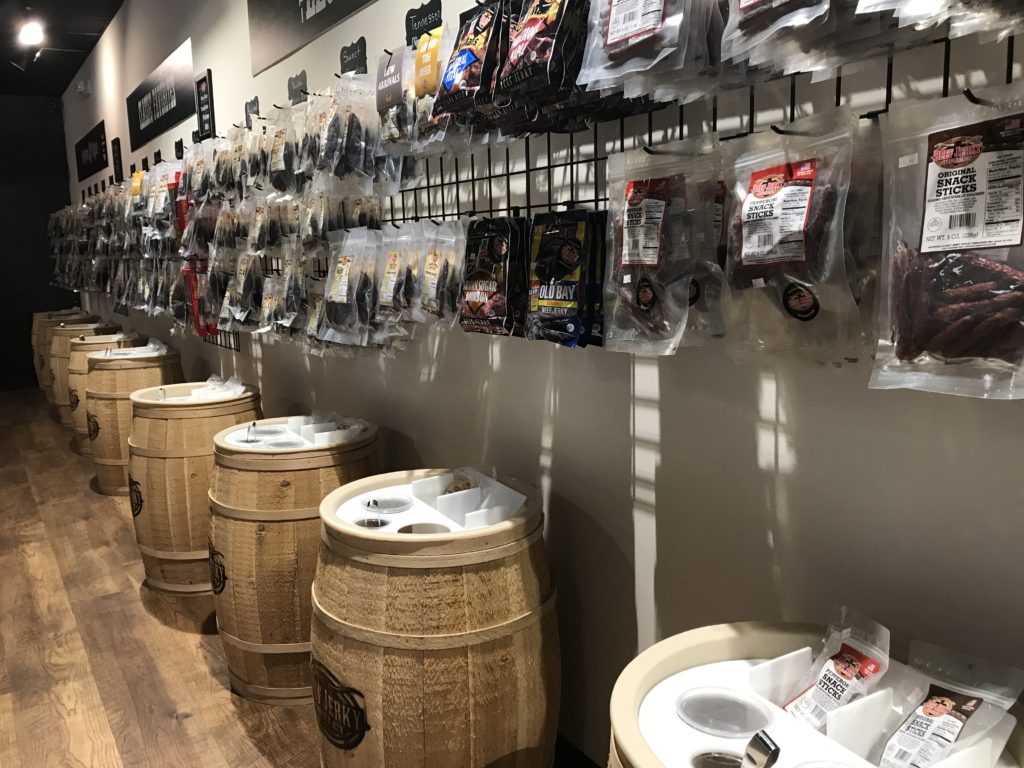 We sell small packages and a wide variety of meats made into jerky. Some people keep trying new flavors; other people have their favorite and that’s what they come in for, time after time. You can buy jerky in bulk at our store, too – in bags, or in sticks. They are great for road trips, or for sales offices to keep on hand for people who are on the road all the time.

What we offer now is so much more diverse. We have specialty popcorn, and specialty nuts. We’ve brought in fruit and candy. And the Amish-made jellies and jams… they are great. All of the other places we buy from – other than the hot sauces – are from small family-owned companies.

Initially on the weekends, we do separate samplings. We always do samples of the popcorn, nuts, and jerky. But we are expanding what we invite people to try. We have built a specific tasting bar; we sample the hot pepper bacon jam, and a couple of the new products. We sell so much of the hot pepper bacon jam that we stopped sampling from the jars, and we just ordered the largest size available. It’s just awesome.

On the weekends, we pick something unique, like a barbeque sauce, and we do samples of that. The jellies, we might make meatballs with, the hot sauces we offer with chips. We like people to have a taste experience when they come into the store. 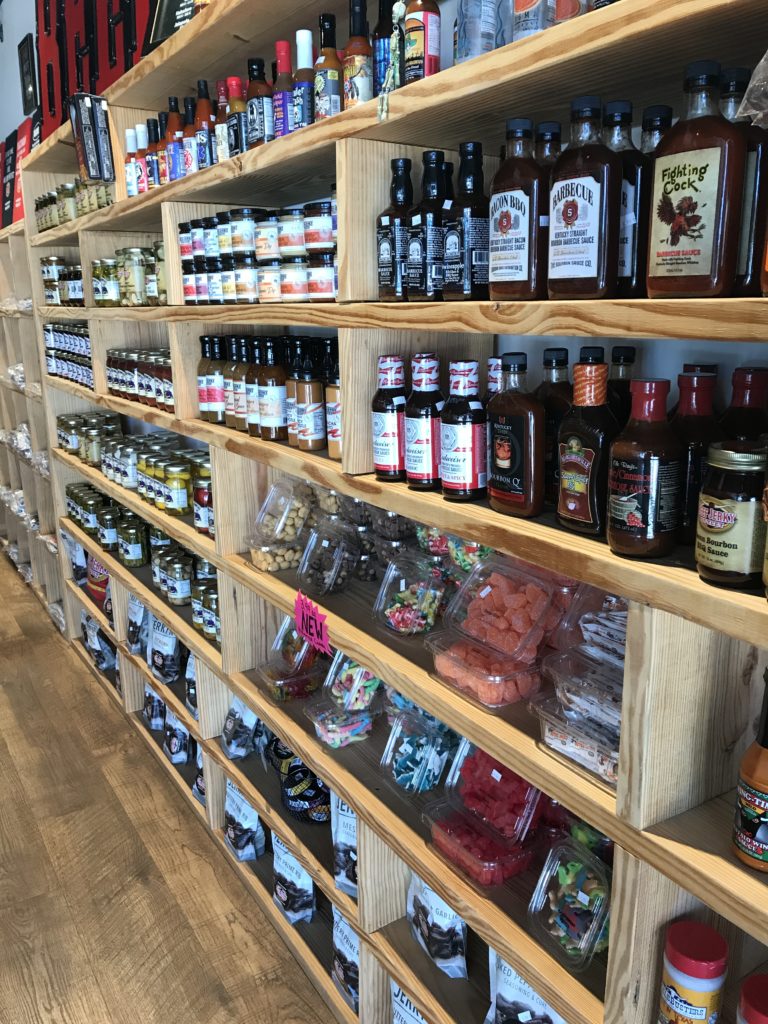 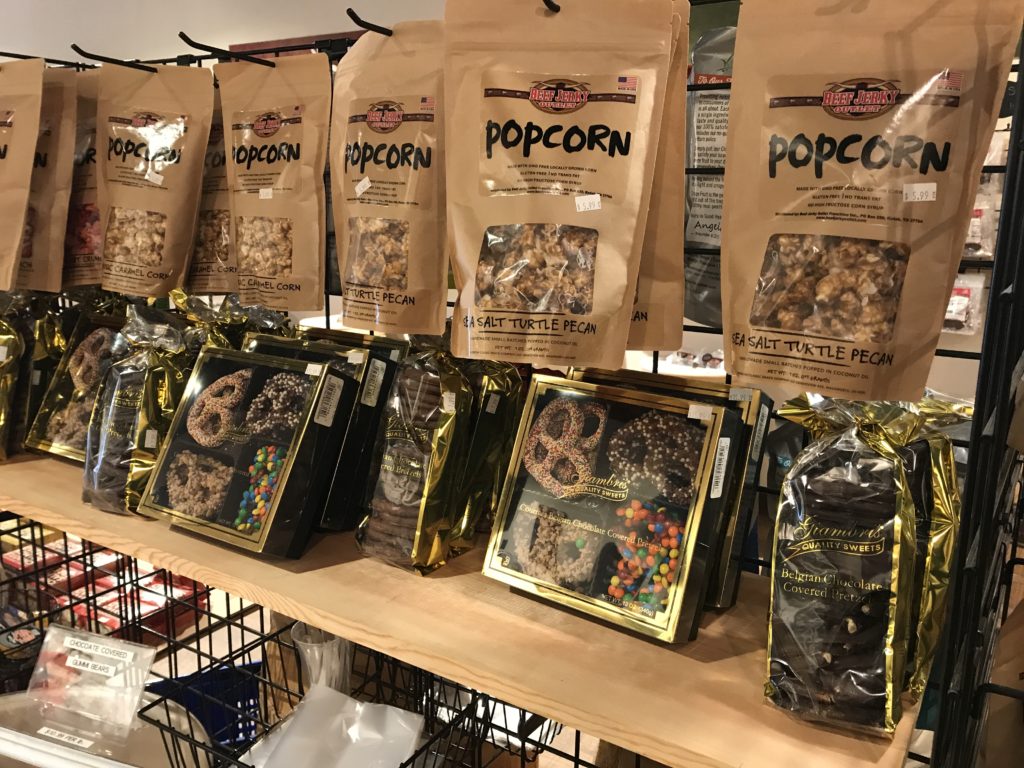 Since we’ve moved this new location on New Centre Drive, we’ve expanded our local offerings. We carry Mossy’s from Carolina Beach. We carry Ceviche’s Panamanian hot sauce, we just got that in because they began bottling it recently. It’s a name that most people here know. We have a barbeque sauce brand called Redneck BBQ Lab, it’s local North Carolina-made, not Wilmington, and they are huge on the bbq circuit.

We get a lot of tourists, especially during the summer months, who want something local to take home for gifts. Food items are fun and affordable, and everyone has fun with them.

Holiday Shopping and Remembering the Military

For the holidays – we just got the gift boxes in! – definitely we have a specific box that the company has done for us. They are streamlined, and very nicely packaged. We can also make our own, combining products that are a “taste of Wilmington.” We do some online order filling, but the website is much more limited than the store. We do a ton of phone orders because people can call and we are happy to package personally for people. 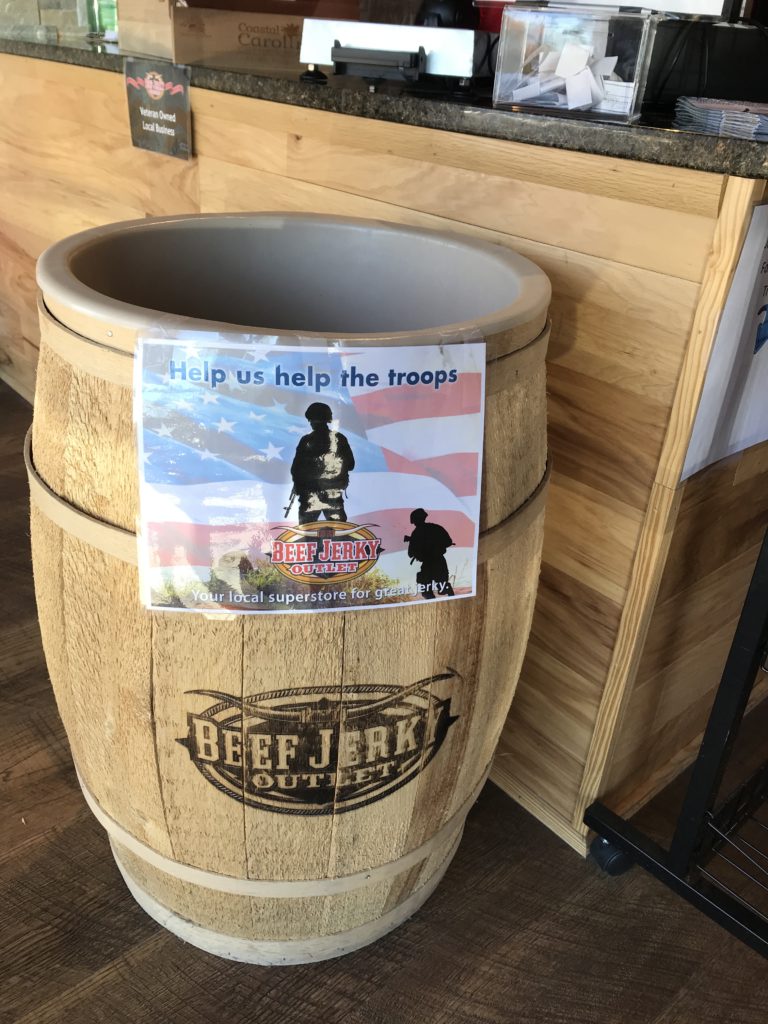 We do all shipping for military free – that’s something that we can do to give back and appreciate their service. So we have a lot of military spouses who call, and we pack and ship to troops overseas. We have a donation barrel up front and we collect items all month, then draw a name out from people who have submitted someone they know who is deployed, and we pack it up and ship it – all at no charge. We are very military friendly. And beef jerky goes with the whole “grab and eat” concept. Our military customers have sent photos of themselves jumping out of planes with our beef jerky, and climbing out of tanks with our beef jerky. We have a wall full of these great photos.

And Then, There Are the Bugs

Bugs. Bugs are our most unusual items. We have suckers with scorpions and ants. We have dried crickets and larvae that are flavored like sour cream and onion. That’s the weirdest thing to me. I’ve tried everything. Why not. The bugs are all toasted, so they are crunchy and kind of nutty. They taste like a pumpkin seed, actually. It’s a concept thing – we sell a ton of them at Christmas. They make great stocking stuffers.

But, you can just give a great beef jerky gift box, too. 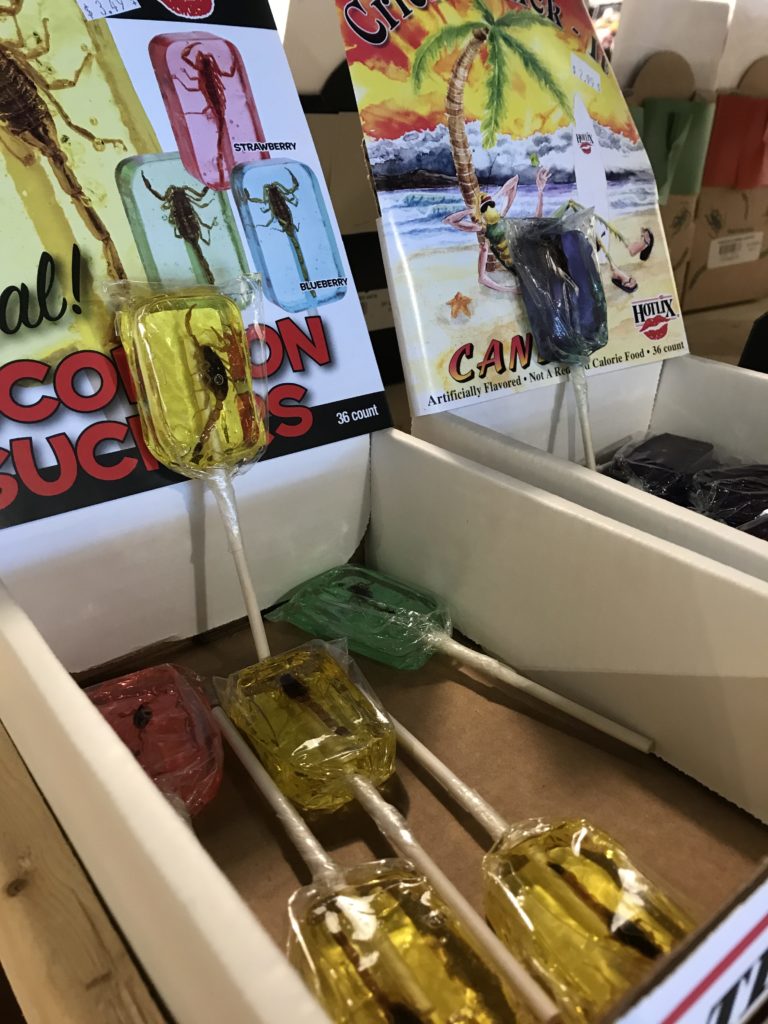 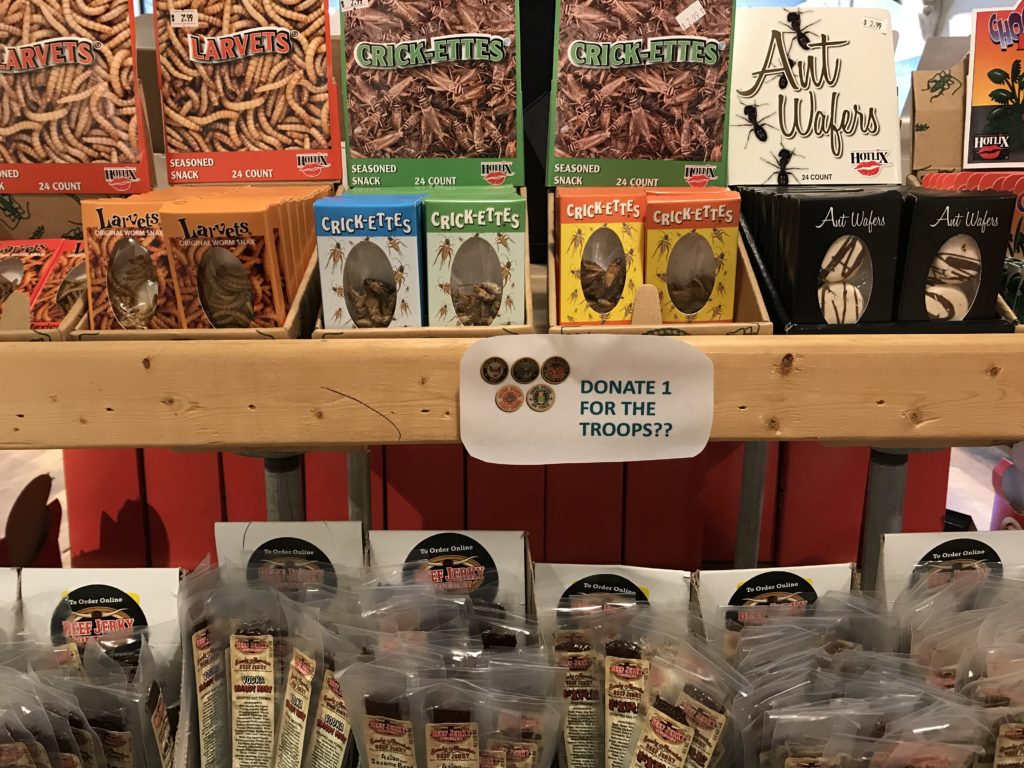 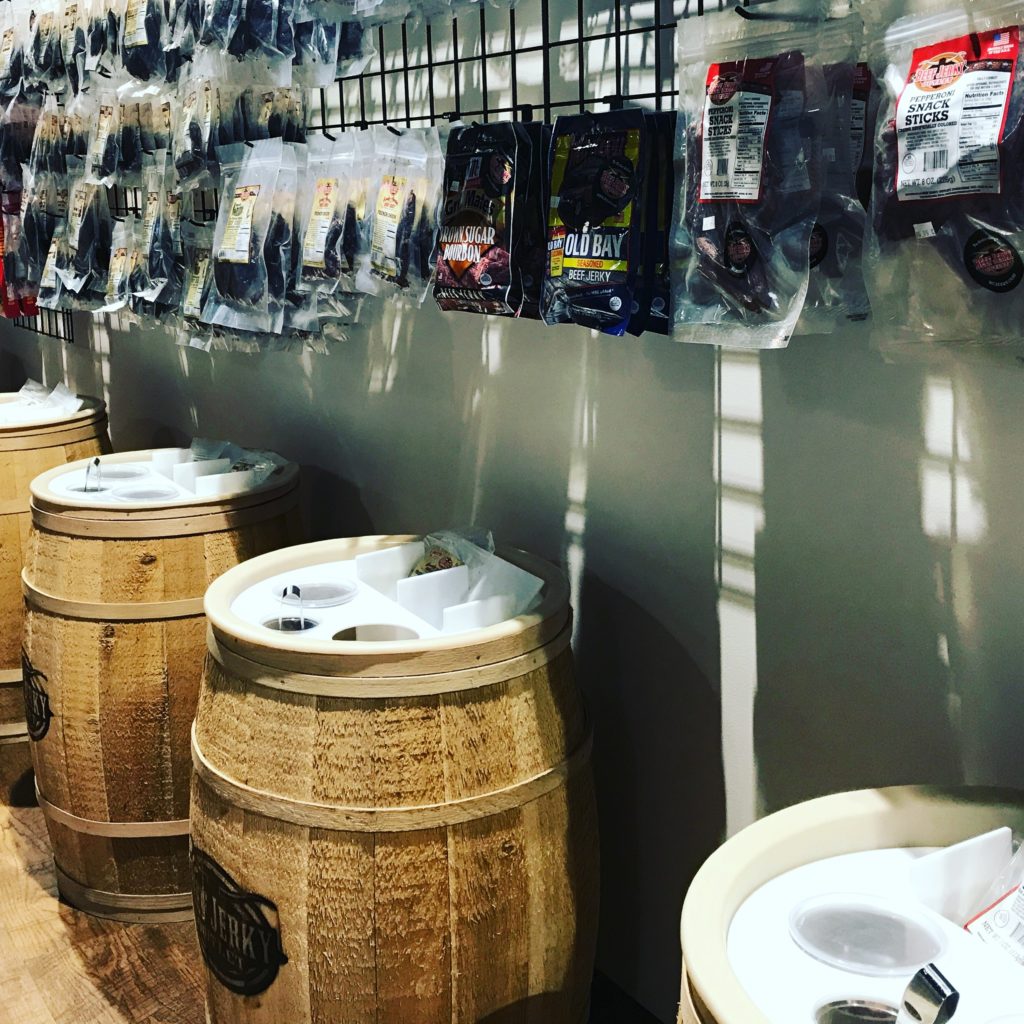