Your Pie Pizza: Individual Pizzas Are Making All of Wilmington Happy

Pizza is awesome. You know it, I know it, the world knows it. No big secret there.

Pizza follows us through the different stages of our lives, too. Kids love pizza because, well, they’re kids and they have a special affinity for it. Besides, it’s one of the few foods that kids will almost always eat. For college students, pizza provides a cheap, easy option that can be a couple days worth of breakfast, lunch and dinner. As we grow up and become parents, pizza is great because it becomes the star of Friday night pizza nights, an easy “I don’t want to cook” option and since kids will always eat it, it saves our sanity.

To me, pizza is an old friend that I’ve been lucky enough to eat in several different countries, each with their own cultural influence and version of how a pizza should be made. In my honest opinion, pizza is never really bad, only varying degrees of good. Well, there was that one time in Dublin, Ireland where I actually had a BAD pizza but let’s not talk about that. Besides, one bad pizza out of about a zillion good ones is a pretty amazing success rate.

Pizza is perched high on my “comfort food” list because it’s a predictable good food choice, regardless of

who makes it or what country I’m in. You can be assured that you’ll get a crust, some sauce, some cheese, some toppings and you don’t have to spend forever making it, just pick up the phone and you’ve got a meal delivered to your door.

If you’re a parent, you realize that your love for pizza changes the first time your kids start to join you in eating your longtime favorite. Long gone are the numerous choices to make your pizza an individual masterpiece. No longer can you experiment with new toppings or combinations thereof, because you’ve been relegated to “cheese or pepperoni” for years upon years. Oh yeah, if you have kids, you know what culinary prison I’m referring to. Don’t get me wrong, I like pepperoni pizza but trying to accommodate adult and kid pizza palates can be a chore almost as daunting as trying to figure out Christmas gifts for all those relatives you never really see until it’s that time of year.

Yes, you can go back to eating more “grown up pizzas” and a place called YOUR PIE is here to help.

As a mother herself, YOUR PIE owner Jada O’Malley endured years of kid-approved cheese and pepperoni despair, despite admitting that she really doesn’t like pepperoni pizza. That’s some loving sacrifice right there! As a self-proclaimed lover of all things pizza related and relegated to such standard options, Jada had longed for the day when she could return to more adventurous choices. 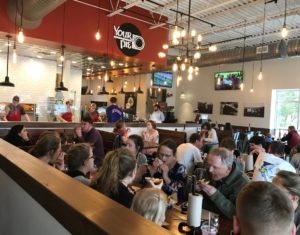 A trip to Charleston, SC changed all that when she saw the YOUR PIE concept. At Your Pie Pizza individual pizzas are cooked to order with super fresh ingredients so that EVERYONE in the family can have what they like. Say it isn’t so!! She was instantly hooked and convinced her fiancé Mike Baker that they should both leave their longtime dental industry jobs, jump head first into the pizza world with a new concept, open a restaurant with the hopes it would survive and things would be great. That saying about “If Momma aint happy, aint nobody happy” must have come to mind or maybe Mike is just an awesome guy (I’d say the latter) but either way, he jumped on board and the couple began an incredible journey to open up their own YOUR PIE here in Wilmington near the corner of College and Oleander.

YOUR PIE is a really cool place and the vibe inside is that of somewhere you’ll really want to hang out in. The retro industrial style lighting, wide open dining area and constant influx of new customers makes for a great experience and the fact that your pie is YOUR pie makes it well worth the wait. Future plans for an outside seating area will make summer dining even more enjoyable. 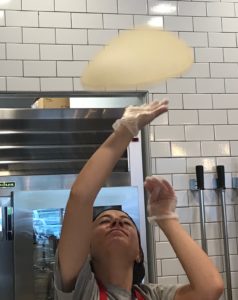 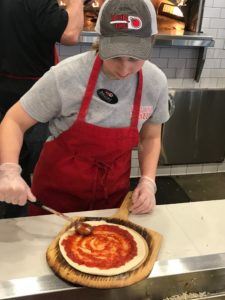 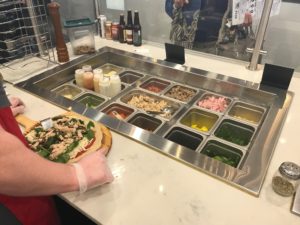 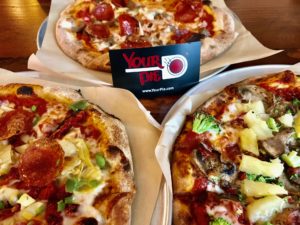 As you walk in, you have the option of three types of crust – traditional, wheat or Gluten Free. After that, you have a choice of numerous sauces ranging from marinara to Buffalo, BBQ and ranch, then several meat choices, REAL cheeses and more vegetables than I’m prepared to put commas between in listing them. YOUR PIE team members prepare your choices in front of you to your exact pizza loving standards. Overwhelmed by all the choices? No problem, just order one of their signature pies, but either way it’s gonna be great. At the end of your complex decision making process, your work of art is placed in a brick oven where it’s baked at 550 degrees. By the time you get done drooling at the numerous gelato options and planning your dessert on the way to your table, it’s already being delivered to you. Fresh and fast? Yup, that’s how they roll. 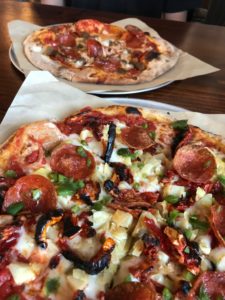 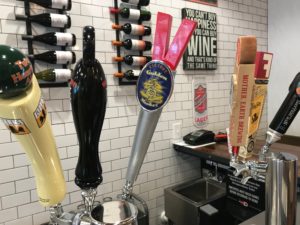 Imagine this… kids have their favorites, you have your favorite and the two do not have to intersect with a chancy “half this and half that” order that may or may not come out right. YOU choose YOUR ingredients on YOUR PIE. This being said, it results in a pizza meal that you can ALL enjoy. Don’t feel like pizza? Salads and paninis are available and I can honestly say they’re every bit as good as the pizza.

The kids can play with dough while they’re waiting, you can relax with a craft beer or wine and revel in the fact that this concept has finally hit the Port City, ending the dilemma of what to get on a pizza that can please EVERYONE.

I took my boys to YOUR PIE to check it out and we were all happy with our choices. No picking pepperoni off of a slice because somebody only likes cheese, it was as if Jada had heard the pizza pleas of parents throughout the Port City.

Obviously YOUR PIE is not just for families, it solves the “fighting over what to get on the pizza” problem for everyone. And I mean everyone.

“We prepare our Vegan orders in the back,” Jada said. “We understand the Vegan and special order sensitivities and we don’t want the food to even be near the meat.” I’m not Vegan but if I was I think I’d be really happy that they’re making such an effort to prepare my order.

You and I both know that the pizza debate is almost as contentious as political, religious or barbecue conversations. New York, Chicago, and a long list of other locations claim to have the best pizzas around, but when YOU choose everything, YOUR PIE becomes the best. 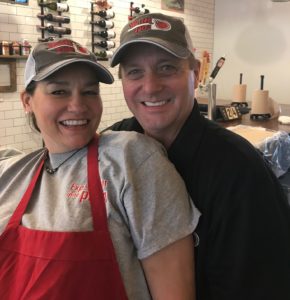 “Our pizza is great, and our staff is amazing,” Jada said. I quickly agreed after seeing her crew walking newbies like me through the process, carefully preparing Your Pie Pizza individual pizzas with smiles on their faces. For entertainment, there’s some pretty cool pizza dough throwing going on as you make your way down the line so it’s dinner and a show.

I had a great experience at YOUR PIE and you will too. I’ve actually gone back a couple times with my kids and we enjoyed it each time. The pizza was delicious, the service was great and that’s a recipe for success.

Speaking of recipes… I like to dunk my “Pizza Bones” (you may call it the crust), into Ranch dressing and I heard that I just HAD to get some of Jada’s because it has a special SECRET ingredient that makes it exceptional. I couldn’t quite figure out exactly what the secret ingredient is and my numerous guesses all proved wrong. Jada laughed as I tried time after time to figure it out with all incorrect guesses. Maybe you can convince her to reveal the secret ingredient because she sure wouldn’t reveal it to me. All I know is that it was great on my Pizza Bones and I’ve gotten it each time I’ve returned.

Enjoy finally being in control of your delicious pizza destiny at YOUR PIE, I certainly did.

1 thought on “Your Pie Pizza: Individual Pizzas Are Making All of Wilmington Happy”