As 2018 kicks off and everyone scurries about to get to work on their New Year’s resolutions, I felt it was important to highlight a local landmark restaurant with no plans of changing anything.

Yes, while all the hordes of January-induced fitness minded locals decked out in their brand new workout clothes make their way to the gym for the next month or two, one thing is for sure…. when the treadmill, protein shakes and cardio kickboxing classes lose their short-lived luster, Winnie’s Tavern will be waiting for them with one heck of a great burger. Just like they have since 1957.

Winnie’s has made quite a name for themselves by doing things simple and doing them well. Or… medium rare.

Some might think such a statement to be a little cocky, in spite of the competition, but let’s face it… Winnie’s has no competition. They’ve set the standard since 1957 when Winnie’s was a drive-in and have been doing all things burger-related exceptionally since then. There’s nothing fancy, and none of the food fads that always come and go, but one thing is for sure… if you want one heck of a delicious burger, Winnie’s is a definite “go to.” 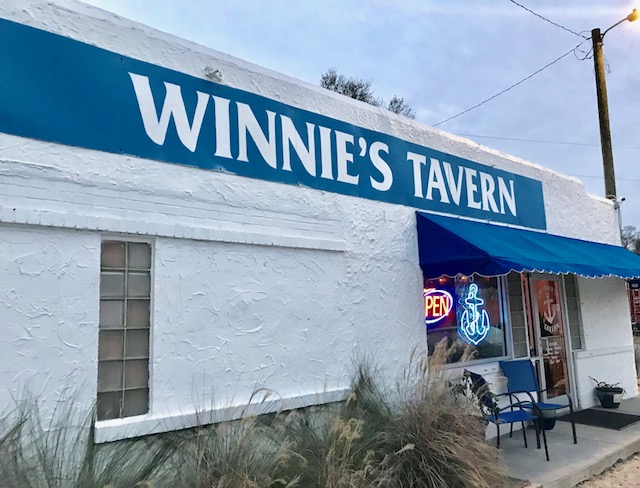 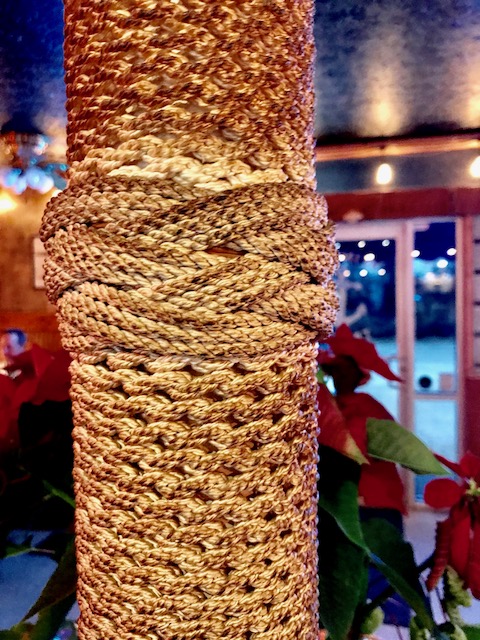 Some might call Winnie’s a “dive bar,” a “burger and fries joint,” a “greasy spoon” or just a “cool place to have lunch.” Yes, Winnie’s is all of that, but I came here to belly up to the bar, strap on the feed bag and investigate this whole “Wilmington’s Best Burger” hooplah. Trying to definitively say who makes the best burger in Wilmington is kind of like saying which one of your kids you like best. You just can’t do it. Well, depending on the day I suppose you can, but it’s usually really hard. You can bet your sesame seed buns that there’s some tough competition for the title but it’s not uncommon to see the chefs who might be considered the competition actually eating at Winnie’s. They’ve become regulars, and there’s a sense of respect paid to this landmark establishment and the goodness coming out of its kitchen.

As I often do, I base my meal choice on the restaurant’s most popular or best-selling dish. I couldn’t even finish my sentence to request this when my server said “Trailer Park Burger.” Well, okay, let’s do it! After reading the description, how could I say no? A half-pound ground chuck burger topped with a fried green tomato, house made jalapeno-pimento cheese, “bread and butter” pickles, hickory smoked bacon, lettuce, onion and Winnie’s signature chipotle sauce sounded like absolute heaven on a bun! I accepted the recommendation of sweet potato fries, dusted with cinnamon and brown sugar and served with a honey dipping sauce. Holy cow, I think I hear angels singing!

As I waited for my meal and wiped the drool off my shirt, I took in all that is Winnie’s and all that has kept people coming back since the days of Winnie’s Drive In during the 50s, the birth of Winnie’s Tavern in 1962 and the decades since. The history of Winnie’s is every bit as interesting as the food is delicious.

Winnie’s Tavern is currently owned by Winnie’s granddaughter, Wendy. Yes, the helm of the Winnie’s ship is captained by a third generation female owner, and while there were some particularly challenging days in the 50s and 60s for a woman business owner, apparently Winnie was quite the character and was never one to back down from her dream or a challenge. Faced with a landowner who refused to sell to her just because she was a woman, Winnie said, “well, we’ll just see about that,” found a way around it and bought up the entire parcel of land, about the equivalent of a city block. You go Winnie!

As times changed, Winnie’s refused to sway away from tradition and the simplicity of a good burger and a soda or a cold beer. The departure from today’s “norm” adds a certain charm to Winnie’s that makes dining there truly an “experience.” Want a fountain drink? Nope, not gonna happen. Why? Because Winnie said sodas tasted better from the can. How about a cold draft beer to go with that burger? Ain’t happening! Why? Because Winnie hated trying to lug the kegs around and said the same about the taste of beer as she did about the sodas. Winnie was quite the character, and her beloved canning jar glasses are still the norm for certain bar drinks. C’mon, how can you not love this place?

Legend has it that one particular brand of beer, canned or not, is forbidden because of a certain gentleman caller Winnie had who preferred that brand. When he messed up with Winnie, he messed up really bad because he and his favorite beer were forever banned from the place. Jeez, I couldn’t help but laugh and I really wish I could have met this lady. In addition to being quite the cook, barmaid, business owner, family woman and all around nice lady, Winnie was a bit of a jokester too.

Decades ago, a guy kept coming into the parking lot with a metal detector and digging holes to find change that had been dropped by patrons on their way out. Although asked to cease and desist from leaving these stumble hazards on her property, he continued despite several requests. Well, when enough was enough, Winnie decided she’d start to throw bottle caps in the parking lot to throw off his metal detector and thwart his nighttime efforts. He continued, she continued. Winnie won. Or hey, how about that silver dollar that was lying in the middle of the bar floor for years? What was up with that? Well, Winnie glued it to the floor because she thought it would be funny to watch as patron after patron tried to pick it up. The patrons would join in on the laughter, red faced, when they realized they had fallen for the prank. Winnie, you rock!

I sat there enjoying the history lesson, the laughter and just good ol’ fashioned fellowship with Wendy and her staff as they told story after story about things like the intricate weaving a merchant marine customer had done to a support beam in the bar and the numerous life preservers from merchant ships around the world that have become prized decorations and a testament to the far-reaching support and love that Winnie’s has gained from loyal customers. I drove about 45 minutes to get my paws on one of Winnie’s burgers and was happy to do it but these guys had been at sea thousands of miles away for who knows how long and couldn’t wait to get back in port to get a Winnie’s burger! Keep your Michelin stars and Yelp reviews, THAT’S the kind of approval rating that you can’t argue with.

Amidst the laughing and reminiscing, I caught movement from my peripheral. Departing the small kitchen (seriously, it’s MAYBE the size of a food truck), I saw my Trailer Park Burger making its grand entrance. Everything turned into slow motion, my mouth began to water and my eyes locked with the mountain of goodness coming my way. I could make out the steam wafting above the burger and I now knew what lions feel like when they see a particularly tasty gazelle they have in mind. The coveted burger cherished by those near and far arrived and landed before me. Sorry y’all, but the history lesson has come to an end, it’s time to chow down. Besides, I’m pretty sure that if Winnie was there, she would have done exactly like Wendy did and left me to this meal with a giggle and a smile. 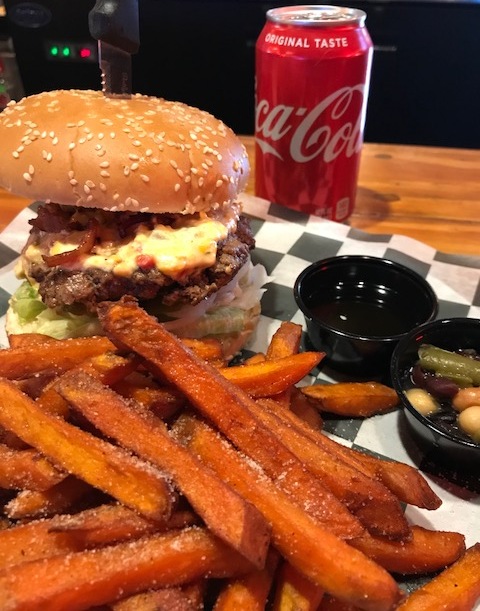 As the burger and I made raised eyebrow, “how YOU doin’?” eye contact, I nibbled on one of the cinnamon sugar dusted morsels of sweet potato goodness that was teasing me from my plate. Holy cow, mix those with the honey dipping sauce and I felt like I was having a sordid affair behind the back of my awaiting burger. As Wendy looked on, I savored the sweet, the savory, the crispy and smooth textures of what could quite arguably be one of the best sweet potato ANYTHINGS I’ve ever tried.

But this burger and I were to become one.

On my first bite, my taste buds went into overload. The “bread and butter” pickles hit me first, taking me back to the times when my mom and grandma used to can them and I’d eat them at a cyclic rate. Next, a gentle nip on the tongue from the onion, followed by the pimento cheese. Oh my, that pimento cheese! I’ve had a lot of pimento cheese in my time, and especially recently as it has become resurrected into mainstream restaurant dishes, but this is quite possibly some of the best I’ve ever had. Amidst all these flavors and that of the perfectly cooked fried green tomato and the luscious bacon, the taste of the ground chuck was actually proudly standing tall. With all those toppings, I thought it was great that you could still taste the burger. There are many other complex topping burgers being served that focus on the toppings so much that the flavor of the burger is actually lost. The fact that Winnie’s has focused on burgers and doing them to perfection every time since before I was even born was clearly evident.

As I sipped my canned soda and ate this delicious lunch, I couldn’t help but do so with a smile on my face. The food was absolutely delicious, and Winnie was right because the canned soda DID taste a lot better than the fountain version. Besides, it was a sort of homage to the past and the roots of Winnie’s Tavern. But the success of this meal went far beyond the plate.

Being in the same place that Port City locals and visitors from around the globe have flocked to for more than 55 years just added to the experience for me and getting to meet Wendy, her family and staff with all the history lessons was worth more than I could ever say. It’s great seeing a local place embrace who and what it is, remain steadfast in the “old ways” of quality food with great service, and carry on their namesake’s dreams. It’s drawn my attention and the tens of thousands of customers throughout the years but the word of Winnie’s has gone way beyond the New Hanover County limits. 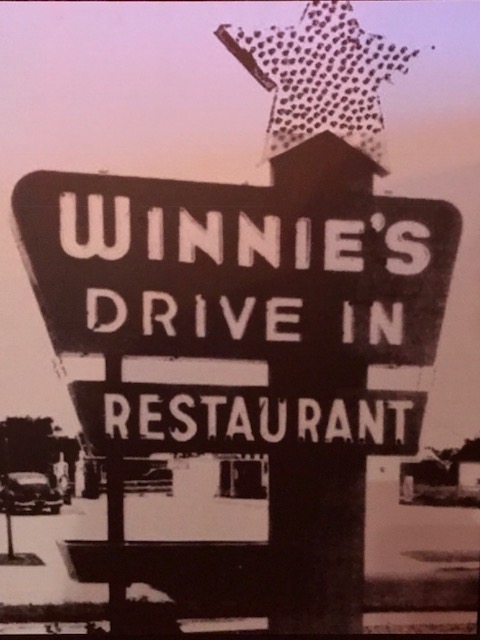 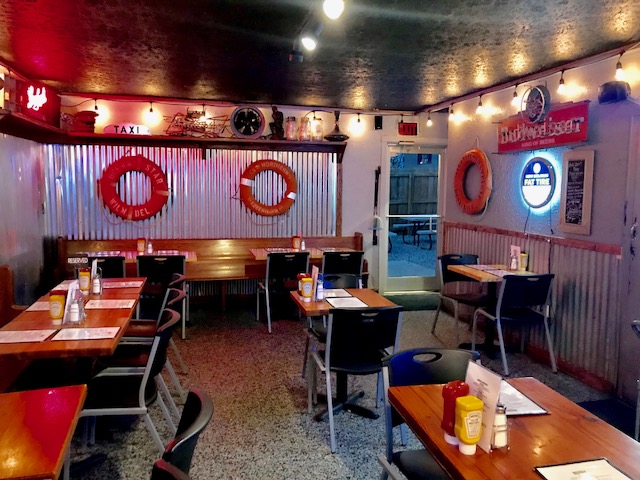 Just recently, the Food Network show “Diners, Drive Ins and Dives” contacted Winnie’s because THEY heard about the place and want to come in to try it and highlight them. Final coordination is ongoing as to when celebrity chef and host Guy Fieri and his crew will arrive but it’s sometime soon. Talking to Wendy about this development, she blushed a bit and told me she was honored and excited. I asked her what she was going to change to get ready for the show and such an esteemed guest.

“Absolutely nothing,” she said.

I know Winnie is looking down with pride. 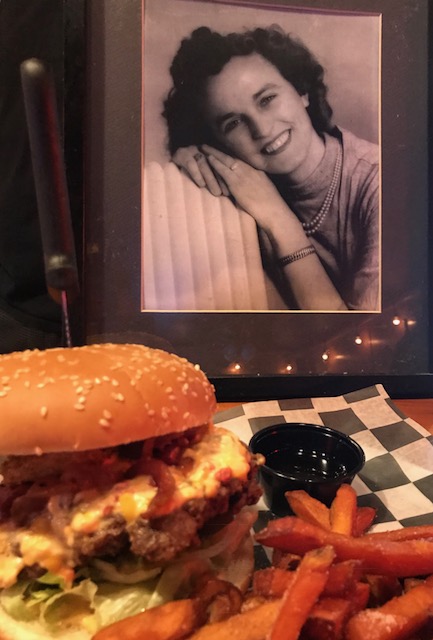