So after the recent snow and several days of kids being stuck inside because of school closures, I thought it would be a great idea to take my 10-year-old son and his pent up energy outside to go play with some sharp knives.

Relax, relax, calm down! Before you start thinking I’ve totally lost my marbles or dial DSS, let me just tell you that he really enjoyed it!

No, actually I took my son to the Kids Sushi Class held at the SEASONED GOURMET and it was awesome! 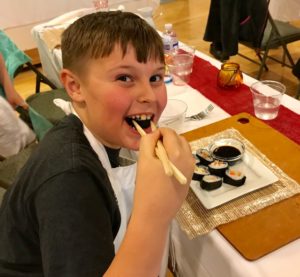 My son, like me, is quite the little food dude. He loves to help in the kitchen, has memorized almost every Top Chef, Chopped, and Kitchen Nightmares episode and makes cameo appearances in some of the highlights I write on here. The kid will eat just about anything and his palate aperture is about as wide open as Andrew Zimmern’s. One of my son’s all-time favorites is sushi so when I saw that SEASONED GOURMET was hosting a kid’s sushi class, I knew that this just had to happen. Besides, if he could learn to MAKE sushi… I wouldn’t have to go out to BUY sushi. See where I’m going with this? 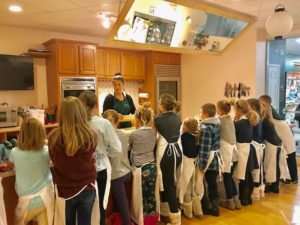 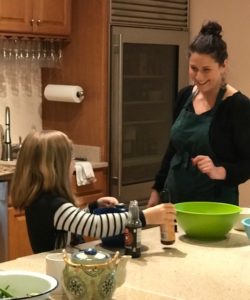 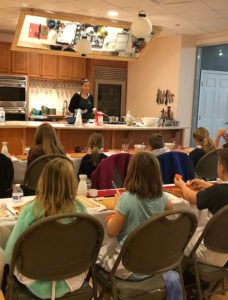 Typically, the thought of 14 kids under the age of 12 handling sharp knives would rank right up there with playing piñata with a hornet’s nest, but Chef Ashley masterfully managed the kids sushi class, the menu and the flow of instruction. Her personality and sense of humor made the class fun and the kids had a remarkable respect for the knives and what was being taught.

Before diving headfirst into the menu, the kids learned about knife safety (HUGE sigh of relief), sanitation, the background and history of sushi, how to properly purchase and prepare sushi rice and general kitchen procedures. Each outfitted with their own knife, cutting board, sushi mat and recipes, the kids listened intently as the class flowed from topic to topic as easily as soy sauce drips off a California roll. The kitchen classroom setup is great because the mirrors and video screen provide great views of what’s going on every step of the way.

I’m pretty sure that if this class had been taught to the parents, it would have resulted in a 911 call or at least a few bandages, but the kids were remarkably attentive, focused, safety conscious and had questions that I would have associated with actual culinary school students. Never mind the SIZE of these chefs, they were really into it and their thirst for knowledge was impressive to say the least.

Chef Ashley is an extremely charismatic lady and taught the kids in a manner that they couldn’t get enough of. She spoke WITH the students, she didn’t talk down to them, and I have to admit that although I was sitting in the back with the other parents, I was hanging on every word just like the kids were. I WAS a little jealous that I didn’t get to wear a cool little apron or chow down on the goodness they made but luckily my son did me a solid and gave me a sample.

I’ll be honest, I’ve paid for sushi rolls in restaurants that didn’t taste or look as good as the ones from the kids sushi class and the fact that my son made it set up a foundation of expectations in the future. I’m not too proud to bribe him. Wanna go to the movies? California roll! What about that Guinea Pig you’ve been asking about? Spicy Tuna! New XBOX game? Poppa needs some Miso! Time to learn about “quid pro quo” little dude.

I don’t know what was more impressive, the fact that these miniature sized Morimotos were making the dishes or that they were EATING VEGETABLES, but either way it was a great experience that the kids really seemed to enjoy. It was pretty cool seeing kids using sushi mats and chopsticks instead of video games too! 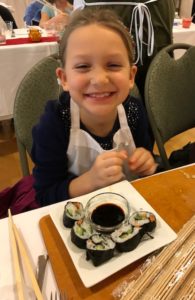 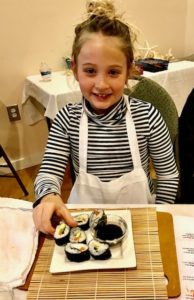 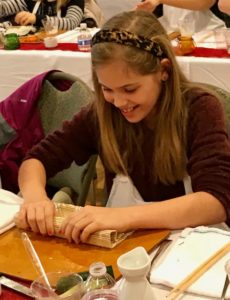 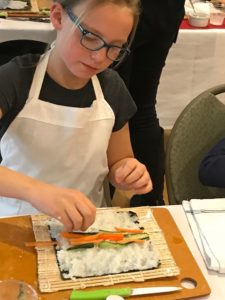 There may have been a short chopstick sword fight or two, a lot of giggles and free flowing fruit punch, but other than that you would have thought the class was full of grown chefs. This experiential visit into the world of cooking was something the kids will remember and something I’m glad to have been a part of. We’ll definitely be back for follow on classes!

If you have a child who shows an interest in cooking, if you’re looking for a really cool birthday party idea (kid or adult), or just want to find something really cool to do with your kids or friends, give SEASONED GOURMET a call at 910-256-9488 to try one of the cooking classes.

Check out the CAPE FEAR FOOD & WINE CLUB’s class schedule at www.theseasonedgourmet.com and see what sort of goodness Chef ASHLEY WIXON is making and baking on her website www.colonelsconfections.com.