Just because I like to eat and write about my food adventures (thank you to all three of you out there who actually read my rantings), some people think I’m some sort of an authority on what’s good and what isn’t, where to go and where not to.

Well, nothing is further from the truth… I just like what I like. Greasy spoon diner, fancy pants fine dining, taco truck… I like ‘em all and I’m always up for a recommendation of somewhere new that I’ve just “GOTTA try!”

Of course the usual suspects of hot spot restaurant recommendations always come up and let’s face it… they don’t need much help in advertising what they do, especially not from a guy like me. I’ve had recommendations of everything from a Piggly Wiggly deli to white linen places and everything in between, but one thing that actually took me by surprise that I keep hearing about OVER AND OVER AND OVER is some international food truck burning up the roads of Wilmington.

You’d think that as Wilmington becomes more comfortable in the culinary renaissance we’re in the midst of that a food truck would be an afterthought, somewhere to visit just because it’s convenient. You know kinda like that leftover hard salami in your fridge you’ve had from that party seven months ago but you scarf down unapologetically when you have the 2 a.m. munchies. (Please check the expiration date.) Well, nothing could be further from the truth. Some of the mobile food trucks in our town are making absolutely delicious food despite the fact that they’re serving it out of little windows on paper plates and not on fancy plates with shiny, perfectly arranged silverware. 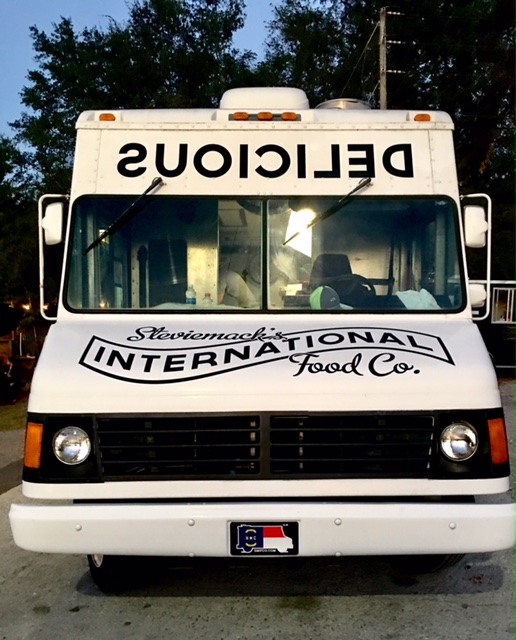 So anyway, I keep hearing about Steviemack’s International Food Company on a regular basis. I’ll admit, I was a little curious as to why more people were telling me that my life would have no meaning if I didn’t visit this truck more than if I missed seeing one of the seven wonders of the world. It’s gotta be good, I’d imagine. Well, I got my chance.

I got a frantic phone call from a friend who in a staccato burst of excitement told me almost hysterically that the SMIFCO truck was at Waterline and that I better get there immediately! Well, who am I to ignore such an order and the opportunity to do a Steviemacks food truck review?!?!

As I walked up to the truck, sizing it up like a Grizzly bear looking in a stream for the perfect trout, the first thing I noticed was the smell. The aroma swirled through the evening air and lucky for me, I was downwind. I checked out the menu board and it certainly wasn’t your average food mobile selection, that’s for sure. Gone was the stereotypical fried everything, replaced with things like jasmine rice, Sri Lankan curry, asparagus and Brunswick stew. What the???? Yup, definitely international. 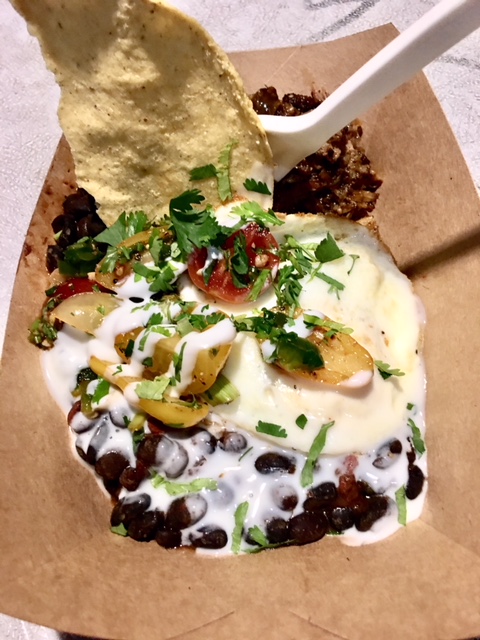 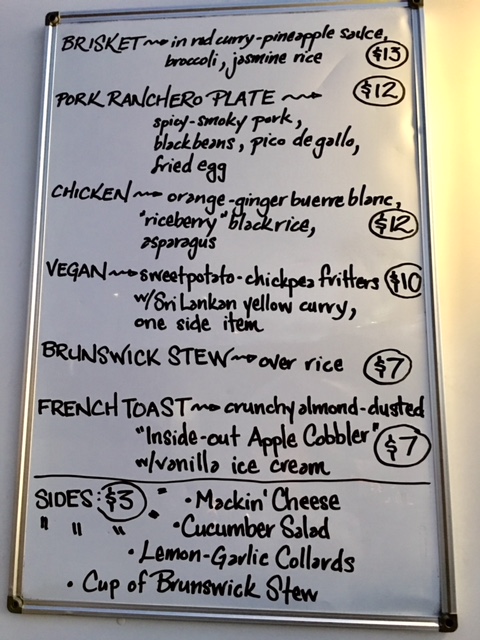 Upon the chef’s recommendation, I went with the Pork Ranchero Plate. Come on delicious, smoky pig parts, come to Papa!

I learned that the pork is actually smoked for 12 hours, which is why the smoke flavoring permeated perfectly throughout the meat, but didn’t ruin it like your Uncle Charlie did that one time at the family reunion. Yeah, we’re still talking about it after all these years. Tender, juicy and slapped with just enough spice to make your taste buds earn their keep, this meat could go well with anything, anywhere. Seriously, I could put this pork on an old flip flop and it would be sublime. The accompanying Mexican food flair included black beans, pico de gallo and a fried egg. I’m pretty sure I set the land speed record scarfing the plate down, all the while taking in layers of perfectly choreographed flavor and textures. Smokey pork wrestled around the little paper plate with crema and pico de gallo while the fried egg, black beans and a crisp tortilla jumped in on the dog pile in one delicious dish that I’d totally order again. And again. And again.

The menu rotates constantly and this night’s choices included a brisket served with red curry and pineapple sauce, chicken with an orange-ginger buerre blanc and “riceberry” black rice or Brunswick stew. One heck of a diverse selection, especially from a place sitting on a set of Firestones. The menu staples include a Vegan dish that has transcended the bounds of the garden and draws carnivores, herbivores, omnivores and whatever other kinds of “’vores” might exist. It’s sweet potato-chickpea fritters served with Sri Lankan curry and has drawn a following of hungry fans throughout the Port City.

Just to “keep it real,” the southern staple of Mac-n-cheese is an option, but this ain’t the blue box stuff! This is “Mackin’ Cheese” which despite the name has a level of popularity that even the chefs weren’t prepared for. When I went, I heard other diners swearing their allegiance to this pasta from the heavens, so I ordered a side. Not because I particularly like mac-n-cheese (I actually like the box stuff to be honest), but with so many people “oohing and aahing,” I had to give it a shot, right? Well, no such luck for me. The truck sold out of 18 pounds of “Mackin Cheese” in under an hour. EIGHTEEN POUNDS! In UNDER AN HOUR! I was astonished but was told that the obviously popular side dish always goes fast. Okay, I get “fast,” but that’s gotta be some kind of record.

The inspiration for this truck and its voluminous dishes from around the world was Chef Stephen Harrington’s own international experiences. Ol’ Steviemack, ya see, is quite the international man of mystery and world traveler. With family and food influences from Thailand and Vietnam, Steviemack actually lived in Hong Kong for quite a while and became well-versed in Chinese, Japanese, Indian, Filipino and even Sri Lankan cuisine. Realizing that Hong Kong was just a small town pit stop on his way to the international metropolis of Wilmington, the chef left Asia and headed west to Wilmington (via Greensboro, of course). Ya know what? I don’t care if he came to the Port City via the dark side of the moon in the back of a lettuce truck, I’m just glad he’s here!

He’s cooked it all, from legitimately authentic Asian cuisine IN ASIA to traditional American breakfast fare, pretty much anything that could be fried in Southern style, to upscale fine dining. He and his wife Jill, with their young daughter (who really calls the shots) decided to “take the show on the road” and that’s how the SMIFCO became a reality. I asked Steviemack about the transition from Asian cooking to breakfast joints to fine dining and then to a truck. “It’s all about the food,” he said. “No matter where I am, I just want to serve the best possible dishes and I want to mix it up. Food should be exciting.”

Well Chef Steviemack, you certainly HAVE mixed it up. You’ve brought a world of flavor to that truck, and I now know why so many people track its path like little kids track Santa on the NORAD site. You never know what’s going to be on the Steviemack International Food Company’s menu, but one thing’s for sure. It’s gonna be delicious.

What to connect with some of the best mobile food in Wilmington? Where to find Steviemack’s International Food Co.