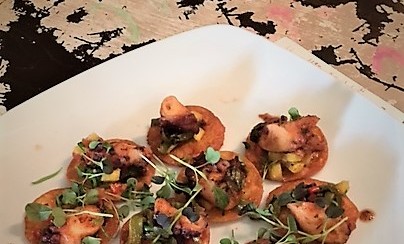 It’s no secret that Cast Iron Kitchen has become the “go to” spot for breakfast and brunch if you’re anywhere within driving distance of Wilmington.

Dubbed the “Best New Restaurant for 2017” by Encore magazine, CIK has quickly grown a following of loyal (and hungry) customers who flock to the Porters Neck location and are willing to wait just to sample Chef Josh Petty’s “kicked up comfort food.” 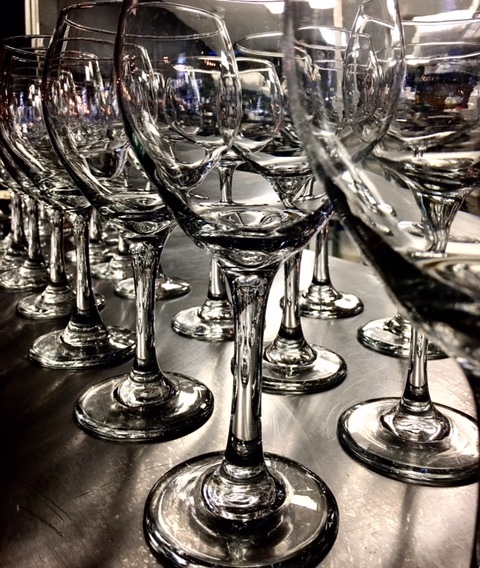 Chef Petty, Cast Iron Kitchen, the menu and the quality of his dishes have earned well-deserved praise and media coverage and have put CIK on top of the pile for breakfast or brunch, but what about dinner?

Some people wonder if Petty is a “one-trick pony” who has painted himself into a corner and typecast himself as only a breakfast and brunch guy. Has his impressive resume and his culinary acumen – earned during years of practice starting as a child cooking with his grandmothers, throughout culinary school onto Charleston and (lucky for us) right back here to Wilmington- slipped a bit since he’s directed his efforts towards the “before 5 o’clock” crowd?

Let me answer that for you… NO!

Petty and his CIK staff hosted a Food and Wine pairing this week and if there were any questions about the chef’s abilities, or the aperture of his skills, they were quickly dismissed once the first taste bud made contact with the food. As geographically far away as possible from his “kicked up Southern comfort food,” the international menu he presented for the Cast Iron Kitchen wine pairing showed artistry and ingenuity, and one would think he had toiled for weeks to come up with the dishes that seemed like they were made specifically just to connect with the wines from Shelton Vineyards. 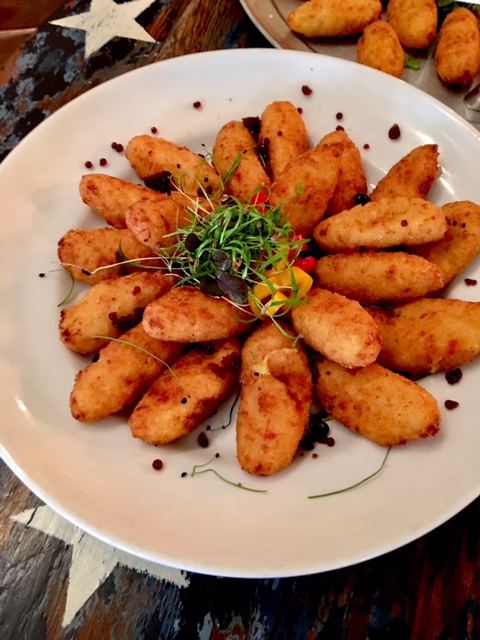 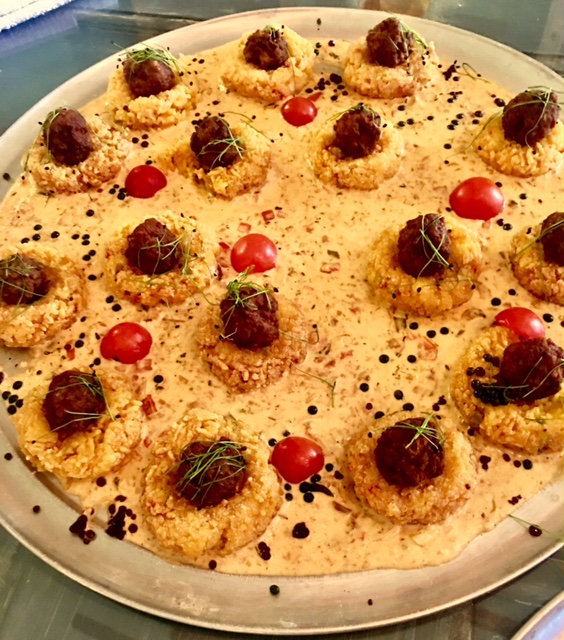 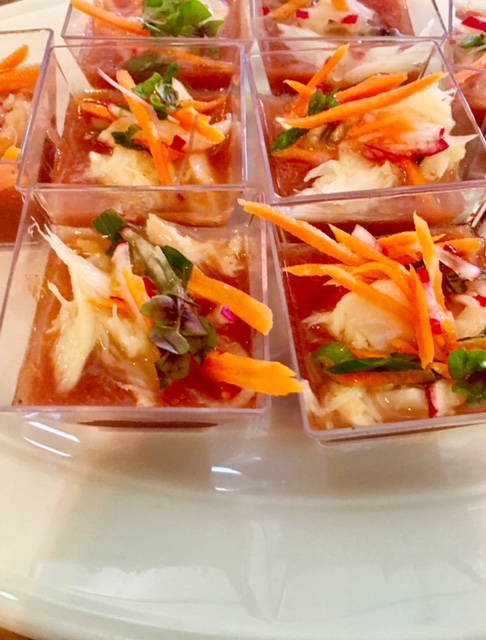 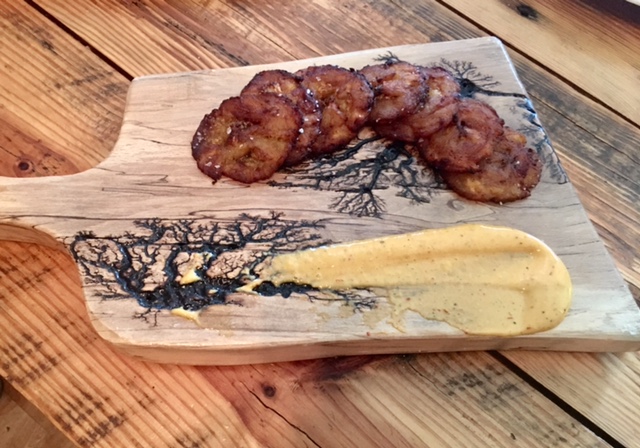 “It only took about 15 minutes to come up with the menu,” Petty says. Now far be it from me to question any chef, and surely not one with a pedigree like Petty’s, but come on dude, are you kidding me? He said that he and his staff had been “dabbling with some dishes we wanted to try” for a while but that the menu didn’t finalize until right before the doors were opened. Well, whatever coin flip or roll of the chicken bones he did worked perfectly.

Platanos Maduros, yes I’ll take 763 of them please. These are fried sweet bananas and while one might consider it a stretch for a “good ol’ country boy” like Petty, I can tell you that they were on point. If that wasn’t enough, how about the Pimento cheese croquettes? This ain’t eggs and grits, y’all! Perhaps you’d enjoy polenta and house-made chorizo? You see where I’m going with this, right?

Holy cow, for a second there I forgot that Petty had earned his acclaim for being “the man” in the breakfast and brunch realm.

“It’s not just me, it’s my crew,” he said. “Without them, I’ve got nothing. We’re a team and they’re family to me.” Well, family or not, whoever was in on this gig has some serious skills. Not like how MacGyver can make a helicopter out of an old flip flop, cassette tape Walkman and bubble gum, but pretty close. And on a plate.

Gazpacho with smoked cod and a lime crema. Okay, sign me up. The contrast of textures and flavors made my tongue happier than when you get 10 bags of mulch at the hardware store and they only charge you for nine. 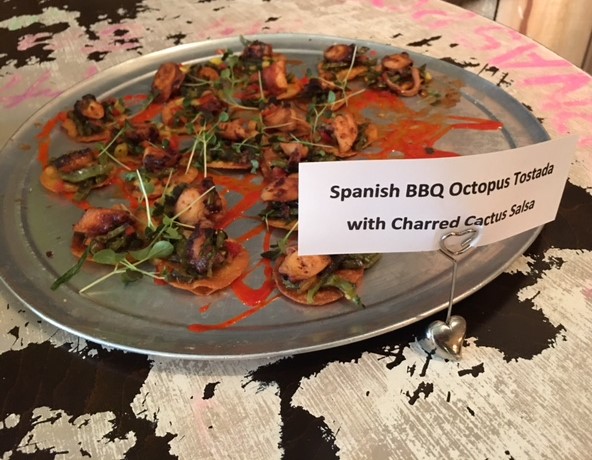 But then came the octopus.

Now before you scrunch up your nose and make that “I just drank cough syrup” face, let’s take a walk down “you’ve gotta try this” boulevard together. “Spanish BBQ octopus tostadas with a charred cactus salad” is what it said on the placard. I think it should have said something about your taste buds exploding and you having an unnatural love for these little morsels after trying them. I certainly do. Sweet and succulent with just the perfect little punch of spice, I went back time and time again. If I could have snuck some out in my pockets I would have. But there were none left. So I’m pretty sure you’re picking up what I’m putting down about the food, right?

I make no claim whatsoever to know anything about wine. I hold no certifications, no refined palate and quite frankly have become pretty comfortable on my “Two Buck Chuck” level of wine knowledge. I’ve had “the cheap stuff” that I thought tasted great and have sipped on $500 bottles with hoidy-toidy pedigrees that I thought were just “meh.” I just like what I like and I’m good with that. Shelton Vineyards opened my eyes and certainly broadened my horizons with the wines they brought for the pairing. 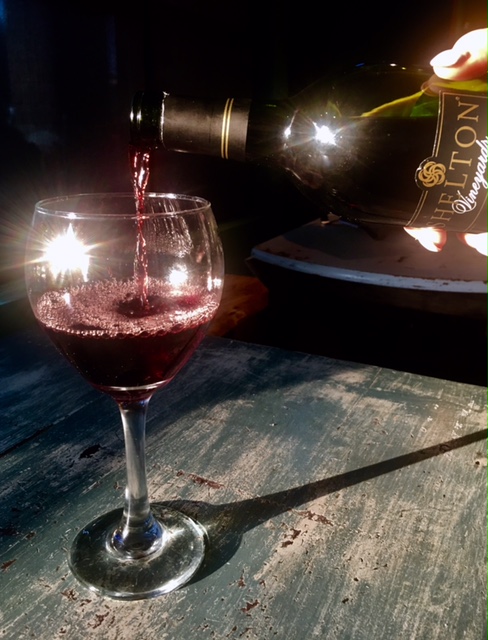 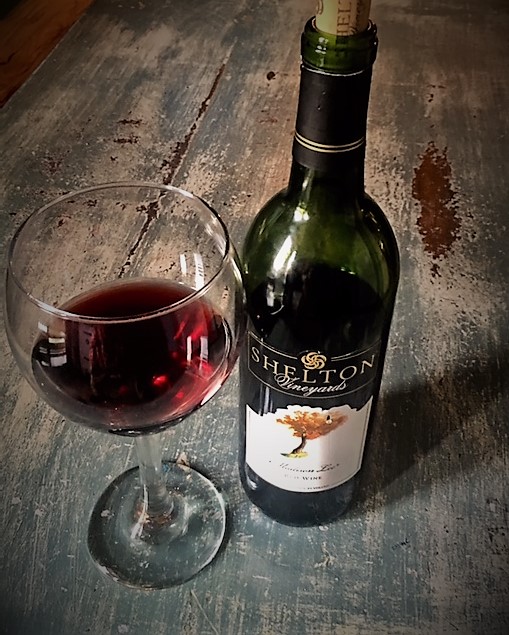 The Shelton Vineyards are nestled in the lush Yadkin Valley of North Carolina, and the area has been certified as an American Viticultural Area. What does that mean to you and me? Not much. But if you know ANYTHING about wine, grapes or vineyards, you know that an AVA is the best possible area to grow your grapes. You’ve heard of that little place called Napa Valley, right? Yeah, me too. And so has the rest of the world. Well, Napa Valley and Yadkin Valley are both certified on the same level as AVAs. So in other words, we’re producing some of the best grapes anywhere right here in NC! Take THAT, left coast!

Shelton Vineyards’ own Christine Clark spoke of the aromas, floral balance and higher level pairing considerations with the more knowledgeable attendees but still held my hand and explained all things wine to me at my level which, we’ve already learned, is very low. She did it with a non-pretentious and charismatic elegance that didn’t make me feel awkward. Hey, I know food, not wine. Extremely knowledgeable in her trade, she was excited and almost giddy (yes I used that word) with the dishes CIK provided and paired the perfect wine with each dish. It was really fun to see such an acclaimed person show the same enthusiasm about pairing wine with Spanish “French Toast” drizzled with an agave citrus sauce as you’d see when a four-year-old kid sees the McDonald’s playground.

Clark and Petty’s efforts intertwined magnificently to make the Cast Iron Kitchen wine pairing happen. Some might say like a skilled ballet couple, but I’m not THAT guy. I’d say something along the lines of their efforts complementing each other just as awesome as peanut butter and jelly do or a cold beer after mowing the lawn. Yeah, you know what I’m talking about! Regardless, the food and wine worked great together, and the event was a great venue to try some new, unexpected DINNER-esque dishes from the most popular breakfast place in town.

So yeah, I’m a believer that Chef Petty has more culinary tricks up his sleeve than shrimp and grits (which are amazing, by the way) and if you go to one of these events, you’ll agree that his cooking skills are wide spectrum, to say the least.