Savorez Triumphs with Food as Art and the Art of Dining 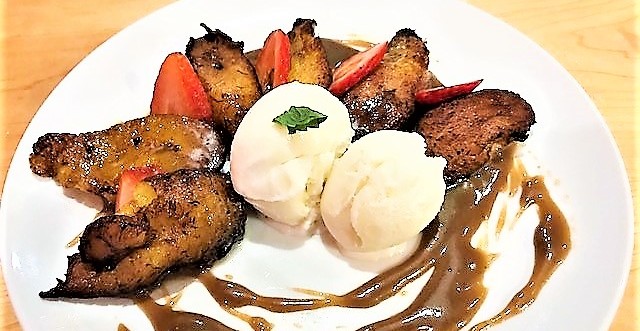 There’s an old chef’s adage that says “we eat with our eyes first.”

We’ve all heard it before, and every time we sit down to eat a beautifully artistic dish set in front of us, we live it. Perfectly manicured microgreens, a geometrically optimized angle of splatter for an accompanying sauce to perfectly accentuate an entrée or a Zen-like minimalistic dot or two of a reduction in the midst of a large white plate all toy with our eyes long before our taste buds are invited to come out to play.

It’s been proven that our eyes and the visual impression of something can literally affect the taste or smell of an item. But in some cases, the dishes look every bit as beautiful as they are delicious and your senses just have to freak out a little bit, throw a happy tantrum and then collapse, kind of like your five-year-old during a holiday visit to Toys R Us. Such was the case when I dropped in to undertake a Savorez review recently. I didn’t fall on the floor flailing about like your kid in the Pokemon aisle, but when they took away my empty plate that had held Seared Tuna Tostadas only minutes before, I seriously considered it.

Like everyone else in the Port City, I’ve been hearing about Savorez since long before the doors opened. Word spread around town that Sam Cahoon, Port City Food Ninja and all around cool dude, would be opening the Latin fusion restaurant on Chestnut Street. Having established one heck of a reputation during years of cooking in Wilmington’s most notable restaurants like Dockside, Sweet-N-Savory, K-38 and Ceviche’s, it was no surprise that Savorez became an instant success in that nanosecond the first dish was served.

Savorez itself is a quaint little restaurant with a lively, colorful look and a relaxing, yet upbeat vibe. Every bit of color and excitement in the restaurant, however, is nothing in comparison to the food being served there. The website, the menu and what’s being served on the plates at Savorez are nothing less than a visual explosion of colors; almost like a psychedelic 1960s “trip” but much better balanced and far more tasty. I know Chef Cahoon graduated at the top of his Culinary School class, but seeing the way his dishes are plated he could have easily been an art major. Who knows, maybe he was. I seriously sat there looking at my dish, clicking away with my iPhone and turning the plate to see every angle as if it were a new dish with each rotation. Simply put, the food is art on a plate. You know how all those TV chefs try to make their dishes absolutely beautiful before they go out? Well, they should all come take a class from Chef Cahoon. Seriously. Hey Food Network, yeah I said it and I stick behind it.

I had tried the young chef’s dishes at the International Street Food Festival and immediately became addicted to the Seared Tuna Tostada, an appetizer FedEx delivered overnight from heaven’s gates that would make any tuna in the sea proud to become one of these dishes someday. Perched atop a miniature corn tostada, the infused tuna, pickled shallots, pineapple salsa, yuzu aioli, jalapeno and caviar are every bit as visually appealing as they are delicious. I’m still not sure which exploded more, my optical nerves or my taste buds, but this appetizer was only the beginning. 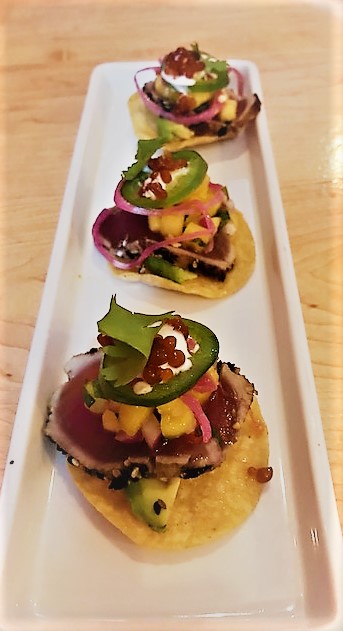 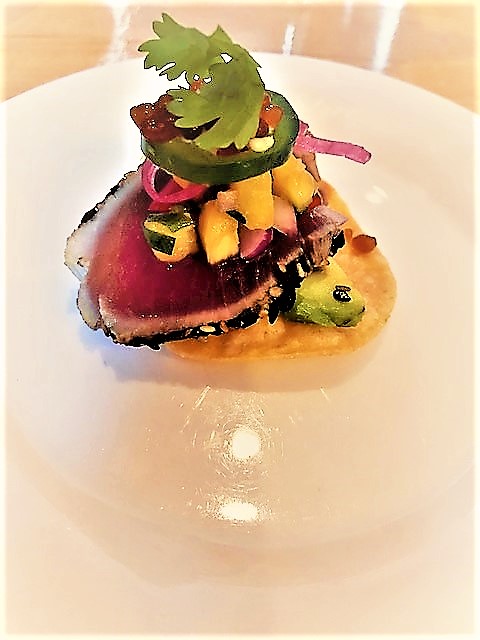 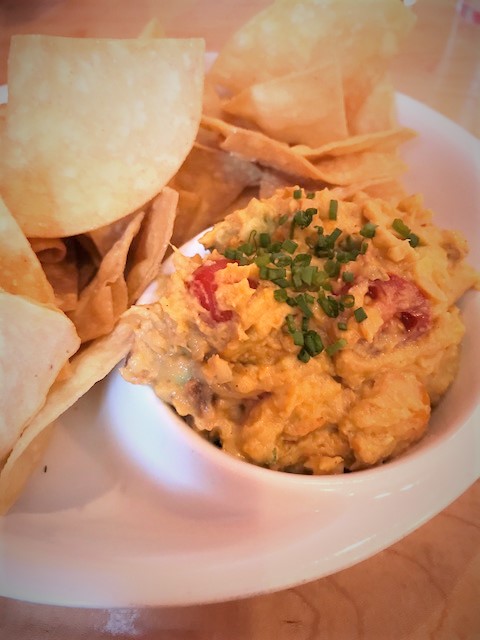 Chef Cahoon and his long-time friend/Executive Sous Chef Aldo Garcia have taken traditional Latin dishes and altered them in a way that not only pays homage to the origin of the dish but takes it to an entirely different level. Case in point, sweet potato and goat cheese “guacamole.” The second I took my first bite, I divorced myself from the lifelong love affair I’ve had with the avocado. Smooth and creamy, the Savorez take on my beloved avocado’s best appearance was exceptional. I could have just sat there wearing a lobster bib and downed a five-gallon jug of it for my dinner, but since I didn’t have a lobster bib with me at the time, I just savored every single atom of this culinary heaven and waited for more. 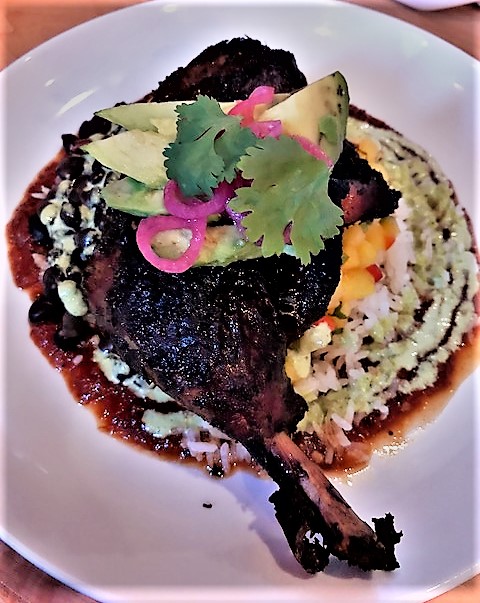 As if that wasn’t enough, how about Arroz con Pollo? Known in Latin and Hispanic families as a food staple worth defending as much as your family name, Arroz con Pollo has many identities depending on which country its prepared in. Mexico, Panama, Cuba, Colombia, Venezuela, Peru and Puerto Rico have distinct ways of preparing the rice and chicken dish (arroz= rice, pollo=chicken) but despite the individual flair each country brings to the dish, there’s an underlying thread of flavor commonality they all share. Take those qualities, add a heaping serving of “oh no you didn’t” (head bobble optional), season heavily with “WOW” and that’s what you’ll get with Savorez’ version.

The braised chicken leg is prepared with a jerk seasoning, served with coconut rice, black beans, pickled shallots, avocado, chimichurri branch and a smoky chipotle sauce that is to die for. On the plate it’s absolutely gorgeous, almost sensuous, and it made me take a second to decide whether or not I could disrupt this beautiful artwork just to eat it. Art quickly lost to hunger and every single bite woke my taste buds up in the same gentle manner that a Marine Drill Instructor wakes up recruits in boot camp. Each individual ingredient was absolutely delicious and notable on its own accord, but the resulting symphony of all the flavors combined was something that even Webster’s dictionary would have a hard time describing. 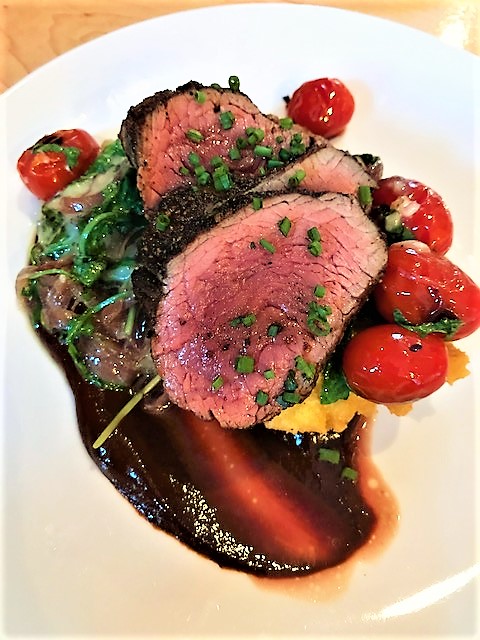 Not being an underachiever in any sense of the word, I couldn’t simply stop with one dish and call it a day. I mean, come on, I’ve got a reputation to uphold and a belly to feed. Next stop on the flavor train was the Carne Con Ancho, a mouth-watering beef dish that will make you look at cows in a whole new light. The teres major is a close cousin to beef tenderloin and the succulent shoulder meat is rubbed with ancho chiles, served with sautéed arugula, grape tomatoes, caramelized onions, gruyere cheese and an ancho-balsamic barbecue sauce atop a crispy arepa (corn dough cake). If you’ve been thinking of taking a vacation to some far off distant Latin destination, I’m going to save you a lot of money and tell you to spend that money eating at Savorez instead.

I’m not too proud to admit that Chef Cahoon’s dishes slammed me up against the wall, slapped me with a depth of Latin flavor unlike anything I’ve seen without getting my passport stamped and left me sitting there hoping for more. Lucky for me, there WAS more… Dessert! 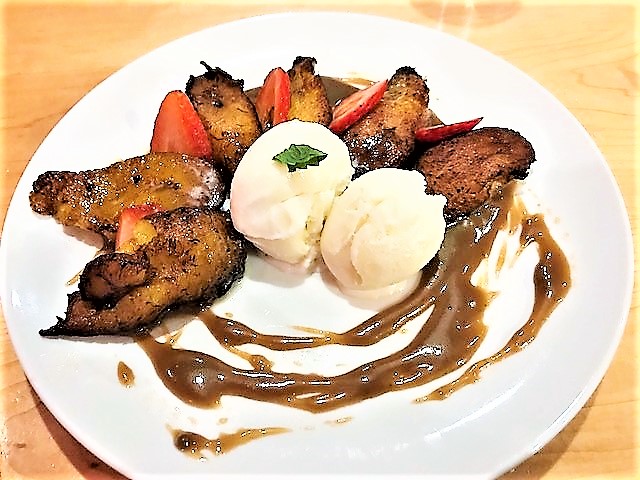 I don’t care who you are, if you’ve ever dined with a true Latin or Hispanic family, these amazing little packages of all that is good in the world have been on the menu. Some serve it as a warm up for the amazing meal to follow, some serve it as an integral part of the entrée itself and in many cases, the best is saved for last and the plantains are paraded out as part of a dessert. Once considered to be peasant food, and used in many cases like a potato, plantains are a second cousin to the banana and in their own simplistic way can become a perfect ending to an already amazing dinner. This was the case for me.

The Savorez dessert menu was actually pretty impressive, and not what I expected at all, to be honest. Flan and empanadas were expected, although Savorez took their own liberties with these sweet staples by making the Flan with Chile and chocolate while the empanadas were made with guava, pineapple chutney and a strawberry gastrique. Coconut Rice pudding and a Coconut Lime Crème Brulee each teased me as I browsed the menu, but I had to “keep it real” and go with the plantains. Dubbed as an “Imposter Foster” as an ode to the dichotomy between Bananas Foster and these luscious morsels, the plantains were simply fried and served with a butter-rum sauce, strawberries and coconut ice cream. If I had been hit by a bus or stampeded by a herd of elephants leaving the restaurant after that dessert and the entire amazing meal, I would’ve died happy.

Chef Sam Cahoon and his entire staff at Savorez are doing things perfectly. The menu choices, the ambiance, the service, heck even the friggin’ tortilla chips were all awesome. Some people have said that my reviews are “too positive” and ya know what? I’m good with that. But even if I wasn’t too positive in this Savorez review, I have a hard time believing that anyone could find anything negative to say about Savorez. It’s just that good.