Carbs… Oh, you delicious, little, tasty creatures. Yeah, yeah, I know… some say carbs are bad and should be avoided. Personally, I think carbs have been been heartlessly discriminated against since the great insurrection of the Atkins Diet frenzy. All the people who jumped on the Atkins “train” missed out on a lot of good bread and associated carb-laden products when they went crazy wrapping everything in lettuce and other leafy rabbit food.

I like carbs. I don’t really know what they are but I do know I like them. A lot. Pretty much everything I like has lots of carbs in it and everything they are absent from pretty much tastes like a love child that evil and sidewalk chalk created.

Luckily, in the South, we have lots of carbs to choose from and one of the mainstays of Southern living is a perfectly baked, carb-filled, golden work of art called the biscuit. Your grandma made them out of a magic that only grandmas know how to use and your mom makes a pretty good facsimile (her biscuit prowess will rise exponentially when she becomes a grandma). Southerners are every bit as loyal to their biscuits as they are to their sweet tea, their college athletic teams and their barbecue, so a disagreement about any of these can easily end a friendship, a marriage, or cause a lifelong Hatfield and McCoy-esque conflict. Biscuits abound and pretty much every restaurant in the South has their own version. Fearing for my own life and that of future generations of my family, I won’t say which is best because it’s so subjective, but I recently found a cool little place that’s making great biscuits, doing some amazing things with them and to top it off, they’re serving donuts too!

Yes, friends, I’ve found the local Valhalla of carbs and I’m SO glad I did.

Nestled away in the Landfall Shopping Center is a place called RISE Biscuits and Donuts. The word “AND” in their name made it an easy stop for me. I mean, after all, who should have to deal with the mental anguish and pain of deciding Biscuits OR donuts, right? Having heard about RISE a while ago from friends, I figured if nothing else it was worth having a look (or bite) into.

“Once you find us, you’ll want to come back,” says Dalton Lyon, the General Manager. That’s pretty serious talk, so I figured I’d sit down and put them (and my appetite) through the paces. Well, the dude was right. 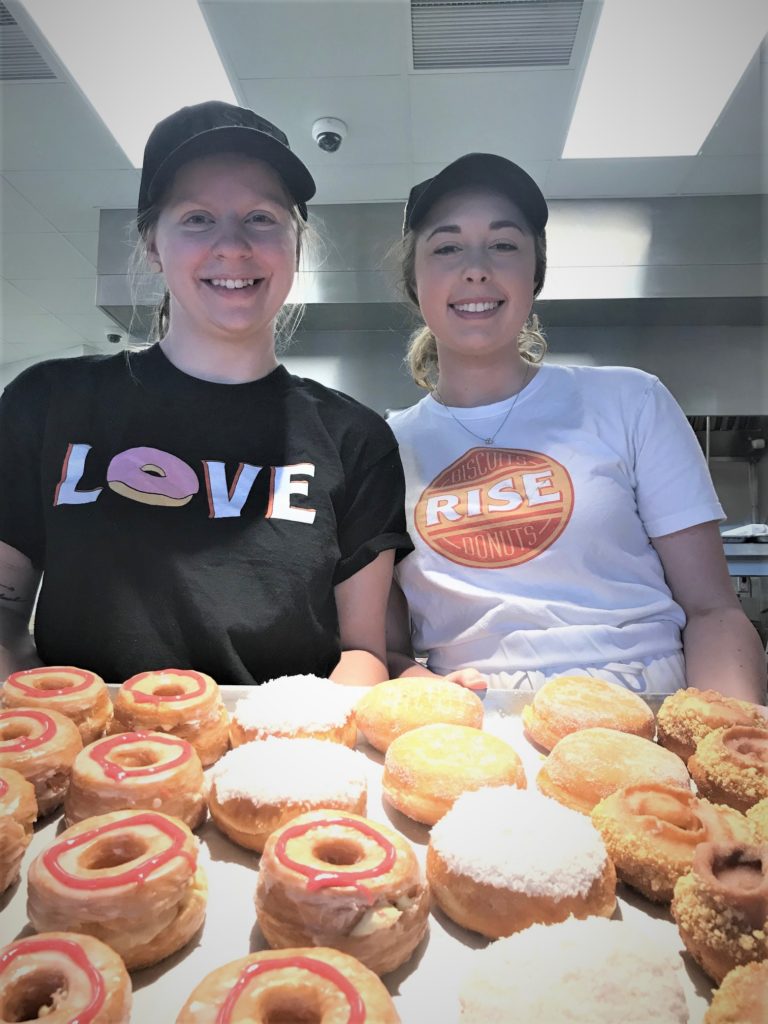 RISE started in Durham and has quickly grown to about 15 stores, with more planned in the near future. Apparently, people actually enjoy their biscuits and donuts fresh, not frozen like so many other places. And they want both topped with fresh, REAL ingredients. Imagine that! Our local RISE makes at least 250-300 biscuits a day with new batches of biscuits and donuts made fresh every 30 minutes. No sitting for hours and hours under a heat lamp or decaying until the frosting morphs into something akin to flaky cement. You can actually watch the biscuits being made from scratch, the pimiento cheese being blended, the chicken being dredged, the fritters being fried and you can enjoy every luscious bite having witnessed the full circle of life in your breakfast’s creation.

RISE has a catchy slogan- “Best Dang Biscuits and Donuts,” which is a heck of a claim, so I bellied up to the bar and held on for the ride. I immediately noticed tray after tray coming out of the ovens and just as quickly emptied as the biscuits and donuts were whisked away by hungry customers at a cyclic rate.

Not knowing exactly what I should order, and feeling the pressure of the line building behind me, (kind of like when you’re at Starbucks and don’t speak that language fluently), I just asked for whatever their best sellers are. I was treated with two warm, fresh morsels of ‘yum’ that made me quickly realize why they’re in high demand and why I had come here. 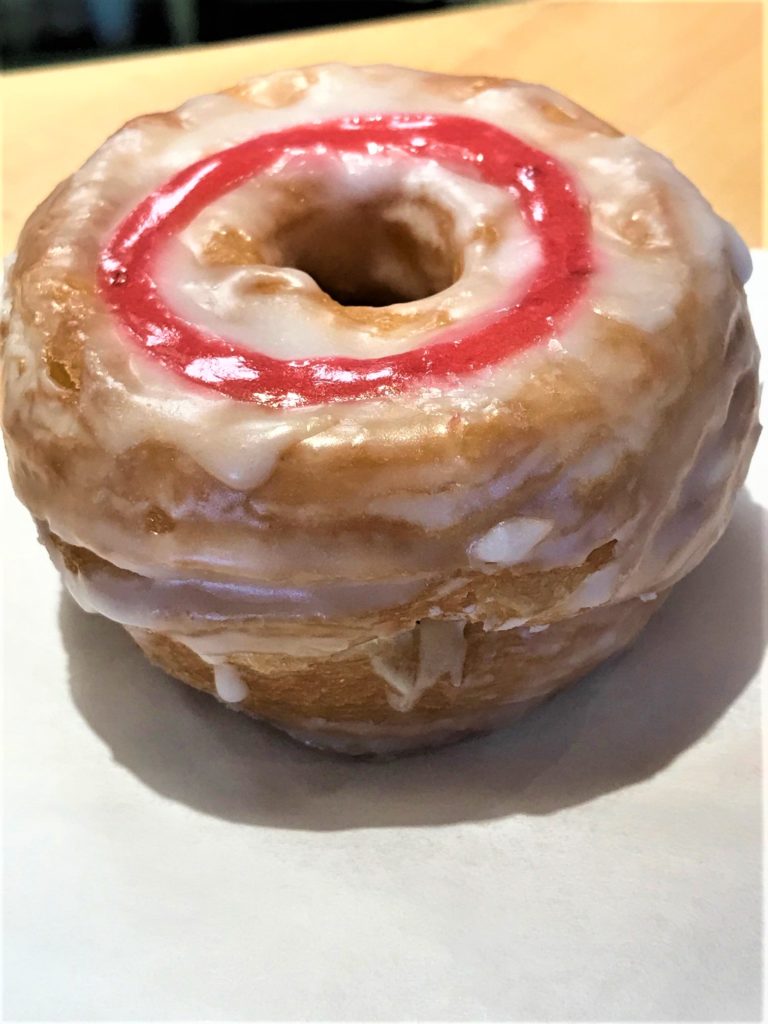 First at bat was their “Cronie,” a hybrid piece of glazed goodness that is half croissant and half donut. This “best of both worlds” delight is swaddled in vanilla pastry cream and a raspberry icing. Wow. I’ll just leave it at that. No disrespect to several other purveyors of donuts in our area because there are some great ones, but this was something totally different and a greatly appreciated departure from the predictable donut norm. 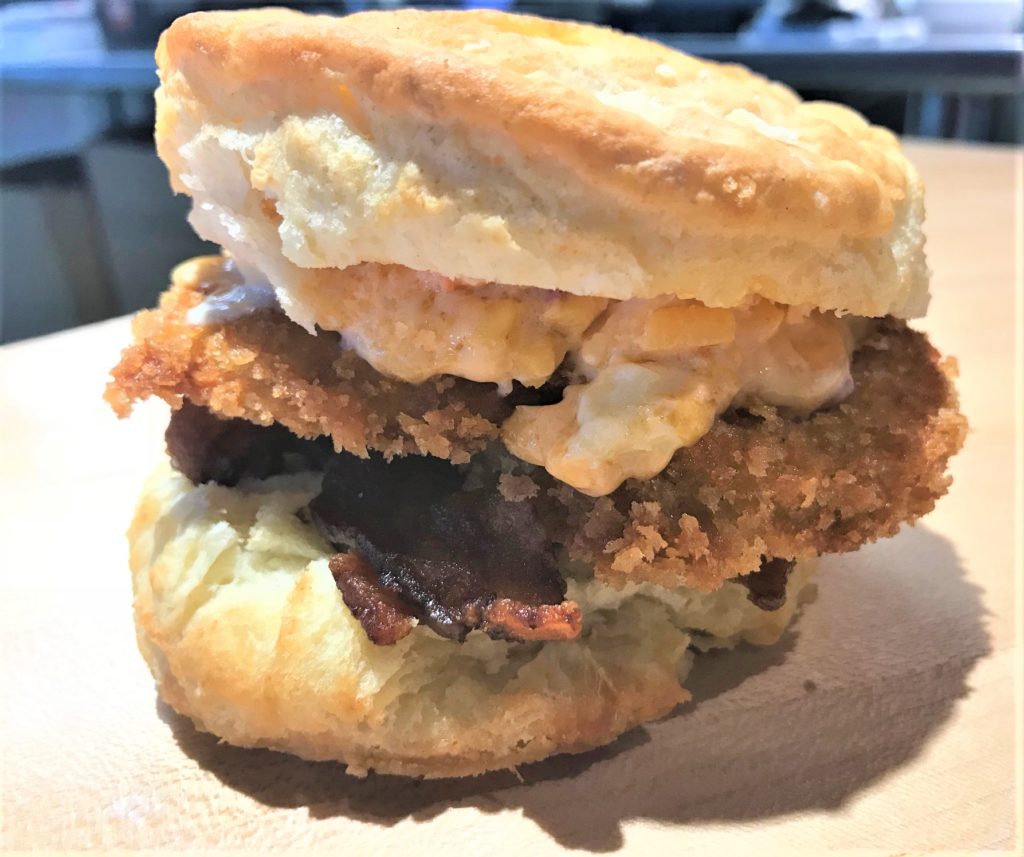 As if good wasn’t good enough, I stepped up to the second item – a chicken biscuit that apparently their customers rave about. Now, it’s pretty easy to get a chicken biscuit at just about any drive through these days and many of the traditional “brick and mortar” restaurants around serve the same frozen, breaded chicken patty thingee, but not RISE. I actually watched the FRESH chicken breaded just like Mom used to do (except they add “fancy pants” Panko bread crumbs instead of just flour – sorry Mom) then fried to a golden brown in REAL kitchen equipment instead of the lineup of microwaves you’ve seen elsewhere. This bubbling hot piece of chicken was placed on a biscuit and topped with a fried green tomato (yup, you guessed it… fresh) and a southern pimiento cheese unlike any other I’ve had. Homemade in the store, they use a traditional pimiento cheese recipe but mix it with pepper jack, cheddar and cream cheeses, some mayo, hot sauce and a couple “secret ingredients” the staff wouldn’t budge telling me about. This results in what might be the smoothest, ooiest, gooiest, delicious substance that’s ever met chicken.

I think the crew at RISE is every bit as great as the food. They were all upbeat and genuinely happy to be there. “The only thing better than our ‘dang good biscuits and donuts’ is our ‘dang good staff,’” remarked Lyons, who was actually sleeve deep in flour and the remnants of apple fritters he was making. (Note to self, come back tomorrow to try apple fritters). Customers of all ages were greeted by name and “my usual” was said more than once by several patrons. Remarkably, their “usuals” were actually remembered and served up with a smile. The “bond with our customers” is not a mere corporate storyline by the RISE staff, it’s obviously how they operate. My kind of place.

The good food and feeling doesn’t stop at the front door of RISE, as they’re extremely active in the community helping schools, local organizations and the less fortunate to “help make Wilmington a little bit better.” High fives to RISE for doing something to help instead of just talking about it.

Having enjoyed my breakfast so much, I coincidentally found myself roaming around the exact same parking lot the next morning (don’t judge me), so I decided to stop in to RISE again. You know, just to see if yesterday was a fluke (apple fritters) and to see how (apple fritters) everything was going (apple fritters). But what (apple fritters) would I order? Oh I know… apple fritters! Having seen them fresh made with real apples, not that canned “apple stuff,” I just had to have one. Truth be told, I really wanted about 147 of them but figured I should leave some for the rest of the Port City to enjoy. 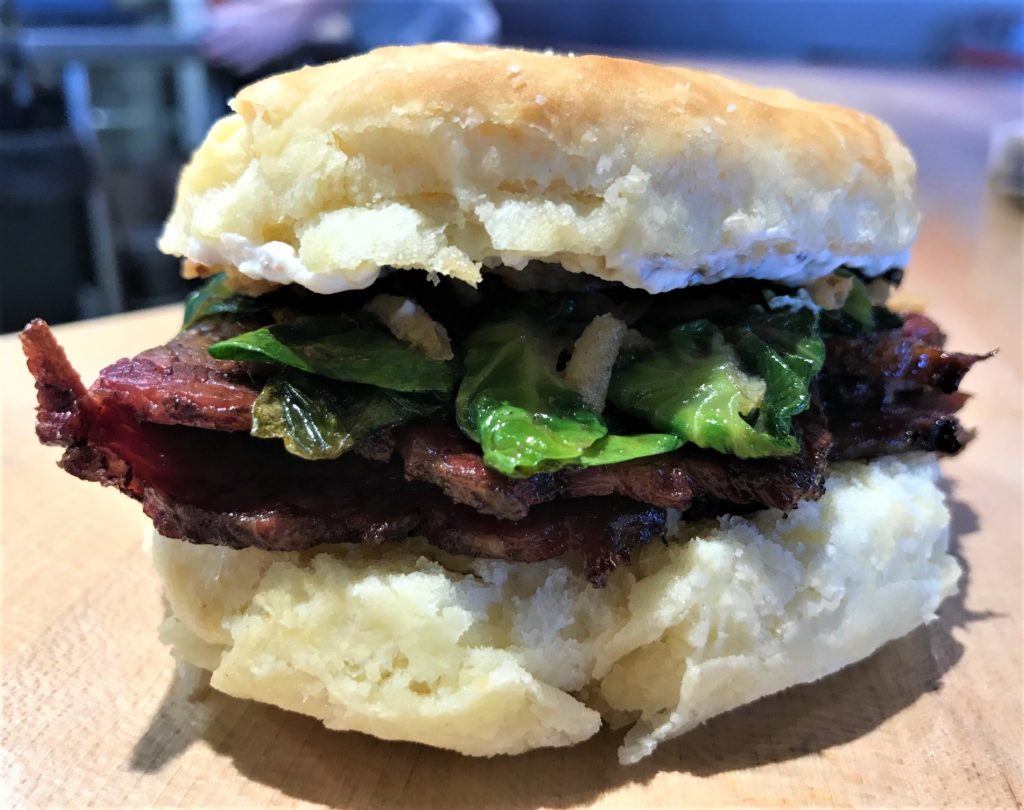 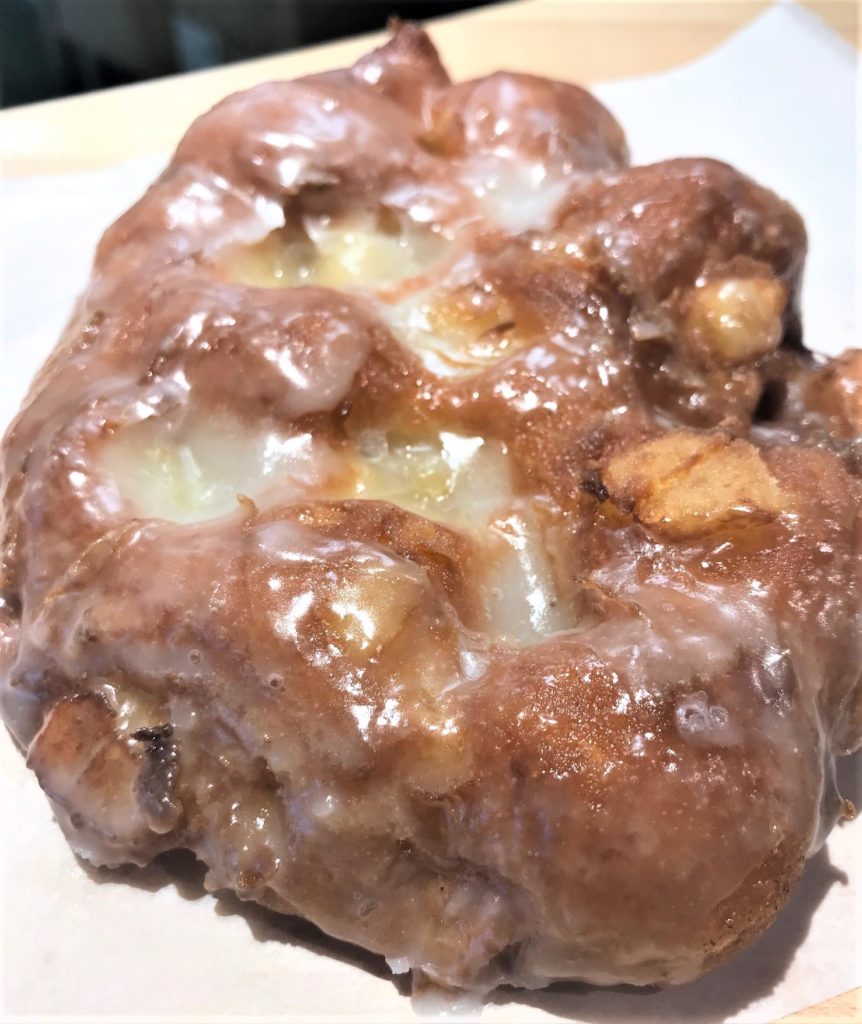 Since an apple fritter is kind of like a donut, I felt compelled to get a biscuit to keep in line with the whole “AND” issue previously discussed. This time, I got the Smoked Brisket Biscuit (insert giggle at the name here). One of their heavenly biscuits is topped with smoked beef brisket, horseradish cream, crispy onions and Brussels sprouts and it was delish! I’m pretty confident that even if you don’t typically like Brussels sprouts, you’ll love this! Their chef-directed menu changes frequently to “keep things interesting” and all of their items can be modified for the customer’s personal preferences.

As I reluctantly waddled out of RISE stuffed but happy (and wishing I had worn more comfy sweat pants), I noticed that every table had their cell phones DOWN and their food up. The smiles (in between bites) were indicative of why RISE has become so popular.

I’m not foolish enough to say who, or what, restaurant has the best biscuits OR donuts in town, but I feel that after two visits and countless carbs that I’m not even remotely ashamed of, I know the place that has the best dang biscuits AND donuts under one roof. Yup, you guessed it… RISE.