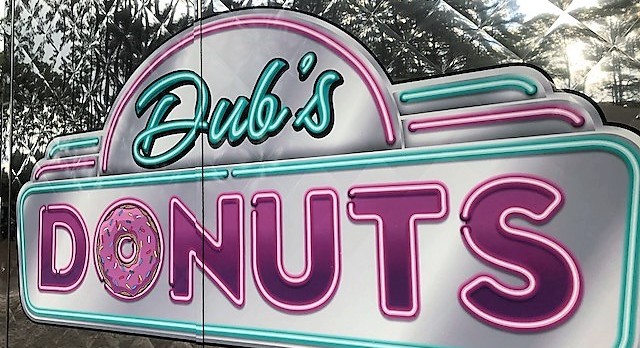 I love a good “underdog” story. Whether it’s David and Goliath, Daniel-san in Karate Kid, the 1980 U.S. Hockey team’s victory over the Russians, or the movie “Rudy,” I always love to see the “little guy” go against the odds and come out on top. I saw something similar to this, although not on the “big screen,” at the recent Food Truck Rodeo at Hugh MacRae Park.

Despite the unfortunate weather, my cubs and I jumped into the old jalopy and went to the event and just as if there were some kind of divine intervention, the weather seemed to let up as we arrived. 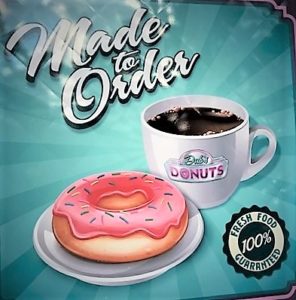 The cast of usual delicious suspects were there, serving up some delectable food options as they always do (even in spite of the weather) and a few “new kids on the block” showed up as well. Hold on 1990’s boy band fans, put down the Aqua Net and your MC Hammer pants, what I meant is that there were some new vendors there too.

After making our rounds and saying hi to our local food truck celebrities, we sat down and ate our lunch. We sat there discussing the meaning of life and lunch as only a dad with his 15- and 10-year- old sons can do, and I took notice of the food truck “circle of wagons” serving up everything from tacos to ice cream to BBQ and burgers. I especially took note of the aesthetic appeal, not only of their dishes but of their trucks as well. Way off to the side of it all was a little food trailer that had a non-stop line of customers. I mean, non-stop! That’s pretty impressive against the “big dogs” in the local food truck market so my curiosity was peaked to say the least.

We walked over to what I thought had to be a company handing out free money because of the non-stop line that was formed. Well, it wasn’t free money but it WAS delicious donuts! 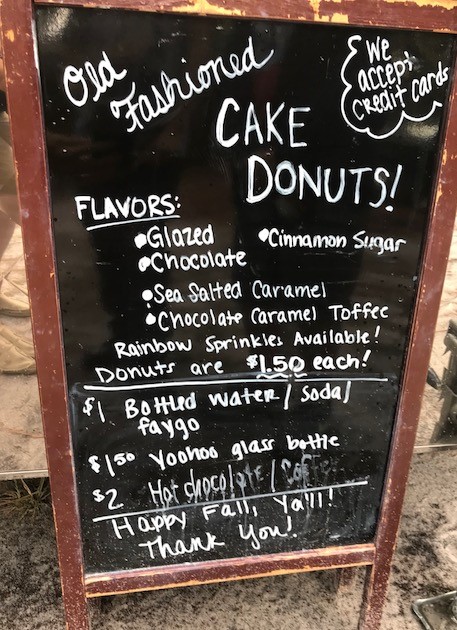 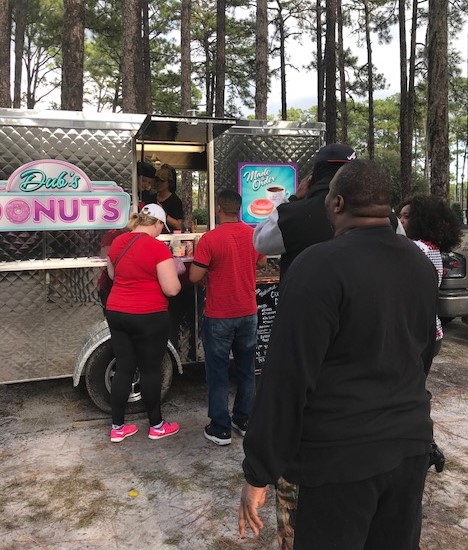 In true “little engine that could” fashion, the DUB’s DONUTS trailer was a beehive of activity and compared to the well-known food trucks just feet away, the contrast in their customer line lengths was a definite win for DUB’s.

Greeted by the two young ladies working trailer, their smiles were every bit as big and bright as the shiny trailer itself. We opted for Cinnamon Sugar, Sea Salt Caramel and Chocolate Caramel Toffee donuts and my boys (okay, me too) loved watching the fact that the donuts were made right then and there. As the donuts were lovingly baptized in the ooey, gooey goodness of glazes, I honestly felt my mouth water. Actually, as I’m writing this it’s happening again. Well, we got our donuts and got out of the way from the Black Friday-esque crowds that were starting to swarm the window. 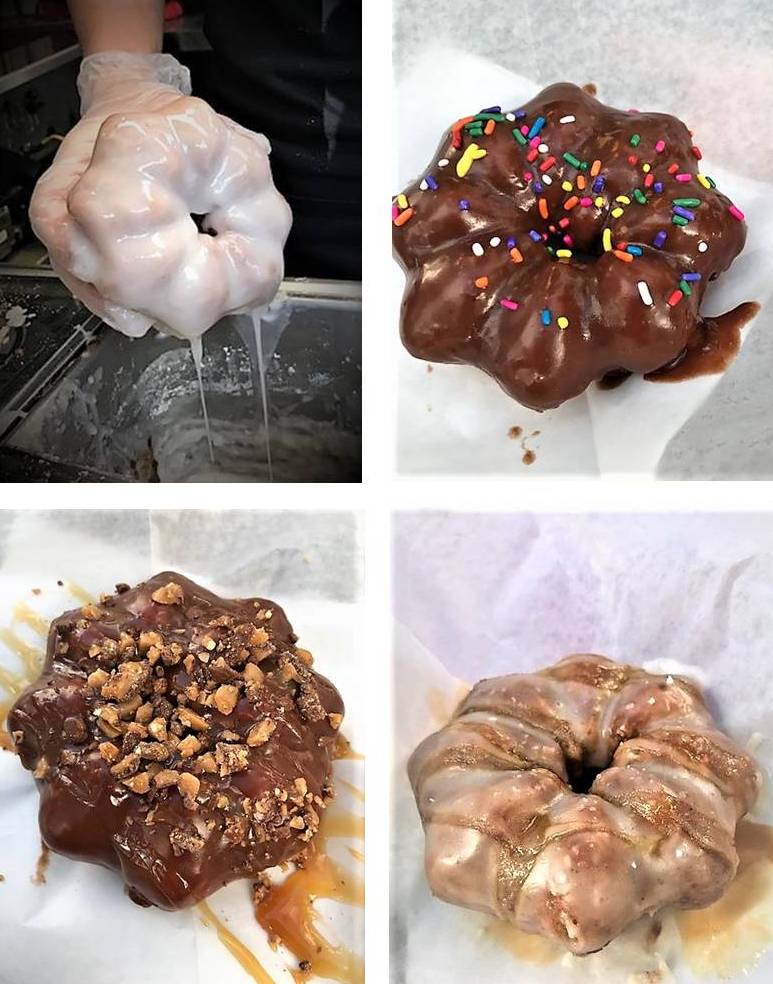 After a brief discussion with my sons about what toffee actually is, how you make caramel and which donut was obviously going to be the best, the obvious question came up. “Dad, why does this little trailer have so many more people at it than the other ones?” Well played, little buddy, well played. “I dunno, let’s try the donuts and maybe we’ll find out,” I replied.

We each eyed our prey and on a count of three took our synchronized first bites into what DUB’s calls donuts but I call “mmmpf, oh, mmmm, wow, this is…chomp chomp chomp…. awesome.” 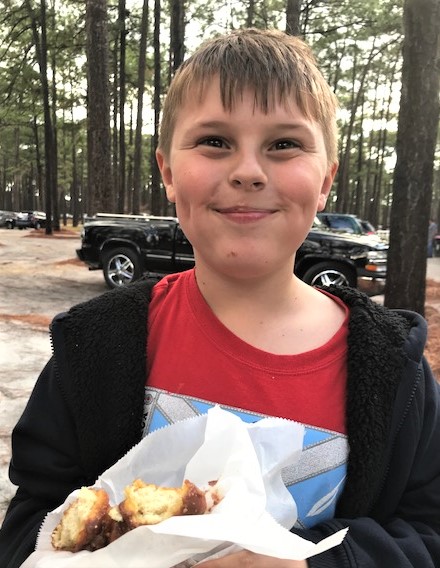 “This is the best donut I’ve ever eaten and I’m going to eat the entire trailer,” my 10-year-old matter-of-factly announced. Well, I think we now know why they had such a line.

DUB’s DONUTS is the new business venture of a young entrepreneur named Kelly Smith and her husband, who had been wanting to start a food truck but didn’t really know how. A mutual background in the Army between the DUB’s owner at the time and the young couple led to a chance meeting, a chance conversation and the young couple taking a chance on entering into the food truck and donut world.

I couldn’t help but ask, “okay, but why donuts?” I thought that was a reasonable question, right? Kelly replied, “because who doesn’t love donuts?” I absolutely agree and wish that my previously ridiculous question could be removed from the record.

As I savored each bite of the soft, spongy cake donut, my tongue and taste buds were “slam dancing” to the rich chocolate and toffee flavors and since it was still warm, it was one of those moments where I couldn’t help but to close my eyes so I could focus more brain and sensory power to the taste that I was enjoying. Even my teenage son ate SLOW for once and if I’m not mistaken he might have actually been savoring a flavor instead of inhaling food like a whale does plankton.

The previous and current owners spent quite some time in training to carry on the DUB’s reputation and quality while making a new name for themselves and continuing to serve some delicious donuts along the way. As they carve out their own culinary niche, they show up at a lot of school activities, community events and of course food truck appearances throughout the area. 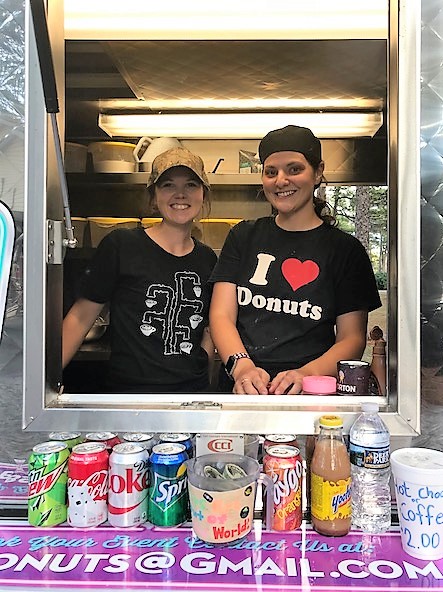 Are they the biggest food truck you’ve ever seen? Nope. Probably the brightest though, as the shiny exterior and graphics have a 50’s diner feel to it, but the products they are serving are every bit as timeless as rock-n-roll, Fonzie and the ‘57 Chevy. Keeping true to the past but embracing current tastes with the toffee and sea salt options that seem to be all the rage in the donut world, (right there with bacon), their plans for the future include some pretty interesting flavors as well. They’re contemplating a name change to reflect the change of the new captains at the helm of this glazed galleon, but to be honest, Kelly says they’re just too busy making donuts to worry about what the trailer is called. They’re more interested in people coming to try their donuts.

As the cubs and I left there to go home, wiping the caramel, chocolate, toffee and cinnamon off our faces, the line just kept on going, and going, annnnnnnd going. But DUB’s kept going strong, feeding their customers and causing a frenzy of happiness. It was heartwarming to see a dream become reality for a young entrepreneur who is doing so well. I hope they keep up their success and I know that everyone who ate their donuts will undoubtedly be back. Like every good “underdog” story, this was one where the “little guy” wins and I don’t know if it was the donuts or just the whole story and experience, but it made me smile and root for their future success.

The donuts were delicious, the service was spot on, and the people were nice. I don’t care if you’re a Michelin Star restaurant or a tiny little donut trailer, that’s a recipe for success and something that will keep me coming back time and time again.

Did you love Ed’s Dubs Donuts review? Hit share and then jump over to our list of the Best Donuts in Wilmington… yes, Dub’s should make the cut too!