Under the Tutelage of the OGs of Southern Cooking

In my late 20s, I got to work with a really great chef – Jeff Tuttle – and that’s where I honed my passion for food, and where I fell in love with cooking. Coming from corporate restaurants, especially the R & D side of it, I had discovered that I love playing with food, rather than just following recipes, even if they were tried and true. I got to contribute to that, and it felt good to get to that point, and I wanted to keep moving in that direction.

I went to work for Jeff Tuttle, and his wife, on Pauly’s Island at Carefree Catering, and he was a really big influence on me. They were really committed to educating about food, and made sure that we went to Las Vegas and to Alabama, and that we went to New York, and that we experienced great restaurants. He got invited to cook at the James Beard House, and that’s something that I got to do with them. It was really cool; when it was happening I didn’t appreciate the significance, but looking back, I’m really proud that I was part of that. I am proud to have worked for somebody like that. He is from the era of OGs of Southern chefs, and helped put them on the map.

When I grew up, Food Network was kind of a “new” thing. All those Southern chefs had features on television shows, and in print. Jeff did. Louis Osteen did. Jeremy Perry. They were on Discovery Channel’s “Great Chefs of the South.” They were all a huge influence on me. I love to cook Southern food.

What the Chef Eats

I love to eat – I never thought I’d say it – but I love to eat grits. Grits are my go-to. They show up on my menu in lots of dishes.

When I get home, I eat what I’m in a current phase of cooking. Right now, I’m kind of at the end of the cooking different breads, and I have a couple different sourdough starters at home. I have a couple that I brought here so that I can play when I have the time. Good bread is hard to come buy.

What the Chef Creates

Being a chef in a restaurant gives me more flexibility. Every hotel job I’ve had, I’ve been able to create my own menu. That’s where it’s very different from being a corporate chef, working with a set menu. At Oceans Restaurant at the Holiday Inn on Wrightsville Beach, we have a breakfast standard Holiday Inn menu that we stick with. It works. People love it. But we have a new all-day menu that represents eight months of hard work – that’s how much time went into creating these dishes, and I’m really proud of it.

I think we did a phenomenal job with the Shrimp and Grits, and the Crabcakes, in the appetizers. I try to pick things that people like, stick with those, and put my own brand on it. The short ribs, and the scallop dish, are also really good. I had fun perfecting those on the entree side.

Kitchen with a View

I came to work at Oceans the week after Florence. The Holiday Inn was only closed for ten days, and then we were right back to business. That’s part of the thing that pushed me here, staying in a place with resilience, and that allows for creativity.

Oceans Restaurant is a really seasonal spot because it is right on the ocean, so we don’t have a lot of downtime in the summer. It’s six days on, and those are six long days. It’s a challenge to attract a local clientele, but putting together a solid menu, and getting out there the great ocean views and vacation-ambiance are on our side. We also have a great winter-time local business that lets us keep staff without cutting people when season is over. 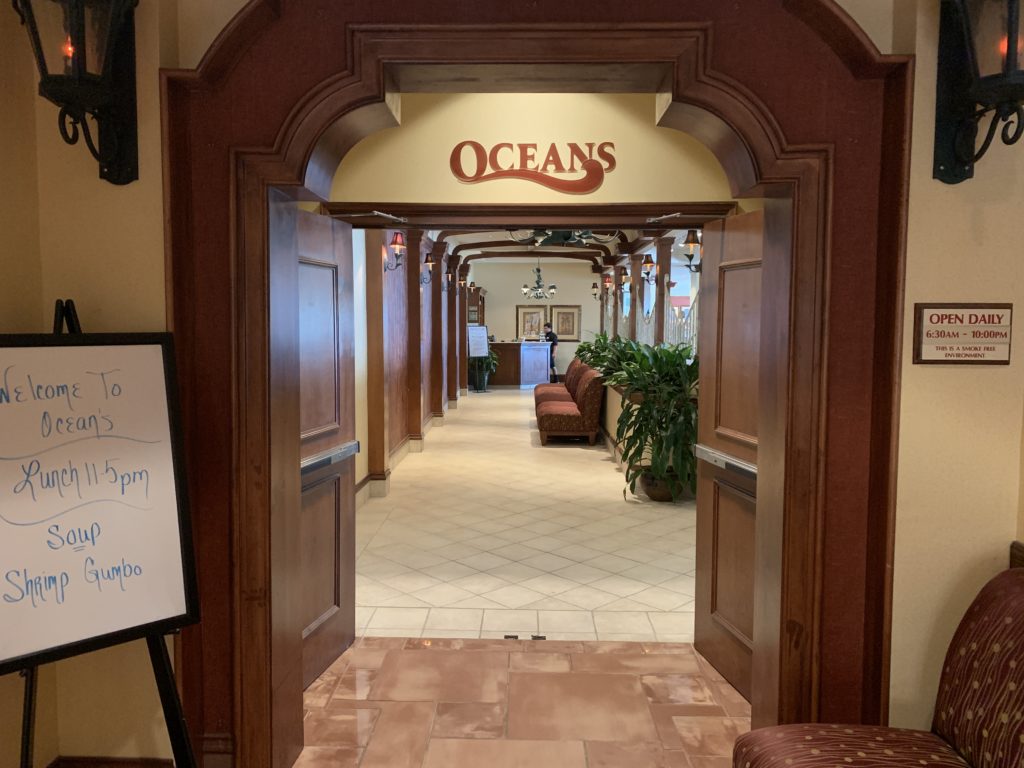 We are really fortunate; growing up in Myrtle Beach, I was really accustomed to getting attached to a crew, and then after Thanksgiving, having to lose people. It’s a nice luxury to have at Oceans. Our reception and banquet space is on the smaller size, for a hotel property, but we can do up to 500 – seated 300 – so that is a draw for local businesses and groups. We were really lucky after Hurricane Florence, too, we had very little damage. The island as a whole, was very lucky.

I was born in Bridgeport, Connecticut, but I’m from the Low Country, South Carolina. My parents moved to South Myrtle Beach in the 80s, and after high school, I went to Johnson & Wales University in Charleston. Culinary and restaurant are the only jobs I’ve ever had. I started out in restaurants, bussing tables and washing dishes. I had a friend from high school who got me a job waiting tables at TGI Friday’s in Myrtle, when it first opened there. Then I moved to Tony Roma’s Steakhouse, and I worked my way up until I went to school, and then I went back there to be kitchen manager.

Working in corporate restaurants was a really good start for me. I appreciated the structure, and having set recipes, but I couldn’t get into food as much as I am now. Even in culinary school, I saw it as a way to learn how to be a manager, and not so much about the food. It was different back then – there was no such thing as “foodies.”

I did the best I could to learn about this culture, and that way of cooking. Being in a great city like Charleston, I got to experience going to good restaurants.

Tempt yourself with Southern cooking and an ocean-side dining experience at Oceans, which you can preview on Chef Roberts’ Instagram.