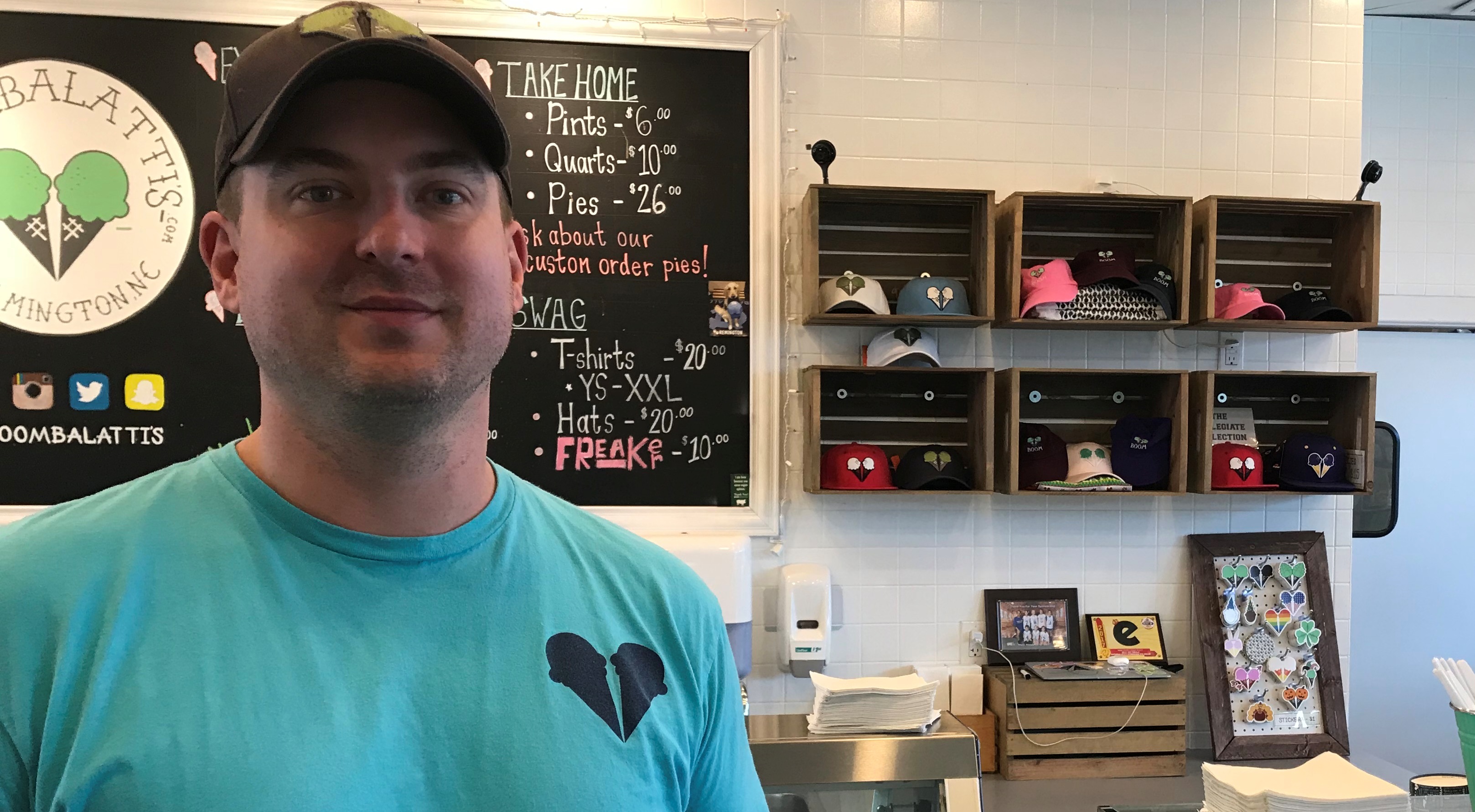 “It was always a pipe dream: once I retired, I’d have an ice cream shop at the beach. “

It’s my favorite food in the whole world. I’ve been making it since college, off and on as a fun thing to do. I had the KitchenAid mixer attachment. I could make basically one and 1/2 quarts of ice cream a day,

freeze a bowl, and then make another batch the next day. I got really into it.

I was working a corporate job for 11 years. I couldn’t do it any more, found out this shop was for sale, and went for it. My wife and I got it in June 2015. The shop was well established before we bought it, and we’ve had it for two and half years. We bought it, re-branded, renovated. The one and only Boombalatti’s + one

This Boombalatti’s is the only one – until we open the second shop downtown. We’re hoping to be open on 4th Street by March.

“Boombalatti’s” was a made up name, without any tie to the previous owners. It’s not a franchise – it was started by the original owners in 2001, not here – toward Wrightsville Beach.

Part of our original negotiation was that we got all the original recipes. We tweaked a lot of them, and added our own recipes. About 1/3 of the case is our stuff, and the rest are the classics: the cookie doughs, chocolate, vanilla… I still love ice cream. My wife, not so much. She’s really into baking. I would eat ice cream three or five times a day if I could. I’ve had to limit my intake a little bit. But I have non-stop access to whatever ice cream I want, on a daily basis.

New flavors usually just hit us. Like, our newest flavor is Snowball. The snow had just hit, and we tried to think of a snow flavor. My wife loves Little Debbies, and Hostess, and all those snack cakes. They make the Hostess Snowball. It’s chocolate cake, with cream filling, marshmallow, and coconut on top. So we made a sweet cream base, with coconut, marshmallow, and brownies and whipped topping. That’s how we come up with things. We took the idea of this Hostess one dollar snack cake, and tried to take it seven levels from there.

It’s a mix of how people order ice cream. There are lots of people who stick to the standards, cookie dough and vanilla. There are people, I see them pull up, and I start scooping: here’s your chocolate cream pie milk shake. And that’s what they get every day for two and a half years… and they were coming before that.

But then you have the mix of people are very excited to see what we have today that we didn’t have two weeks ago.

Ice cream is pretty much my life. I do all the stuff on the back end too, like payroll, and ordering, and all the paperwork. Setting up the downtown shop. There are so many businesses that we like downtown, and we love the vibe of the Brooklyn Arts District. We’re happy to be part of that. Local business owners. It’s kind of like this side of Mayfaire – it’s mostly local here and the other side [of Military Cutoff] is corporate.

I have friends who come in four times and they say they never see me… but it’s because I haven’t stopped working. A lot of the times I’ll be in the back or downtown.

Growing up in an ice cream family

We’ve been in Wilmington for thirteen years. It really is always ice cream season here. Where I grew up in Pennsylvania, there was an ice cream shop that closed about three months out of the year. But my family would go buy ice cream even when it was 38 degrees, we were an ice cream family. We’d always have quarts in the freezer. I grew up eating ice cream.

My wife is really into ice cream too. Our two daughters are two. The eight year old loves to help here in the summer. My other daughter is my Sam’s Club runner… she’s six and she can carry two gallons of milk without a problem.

People apologize because they get the same thing all the time. I say, “I do too.” I could eat anything I want, and nine times out of ten, I get the same one. Stop by for an ice cream creation, or just one scoop of chocolate, and check out Boombalatti’s online. Oh, and vegans, take note: Boombalatti’s Homemade Ice Cream has vegan specials every week, too.