“I just enjoy cooking anything, creating good things. That’s my real specialty. Everyday, I make  something new… for myself, just to see how good it’s going be, and what I can create for my customers.“

Roko is going to be six years here, in March. Before, I was 14-1/2 years in New Bern. I had my own restaurant there, which was Italian cuisine as well. I make a lot of different pastas, stuffed pastas, and stuffed meats.

I love Wilmington. We had been coming to Wilmington for years before we moved here. People in Wilmington appreciate good food, and I love it so much when I create my own dishes. My style is a 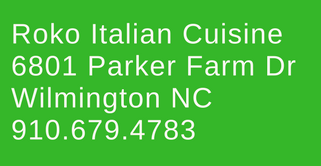 little bit mixed between Croatian and Italian – whatever we do over there, that’s what I’m doing here. I’m using so many different Croatian seasonings, and I’m mixing flavors to make it my own. I just want to make it delicious, for people to love their food. That’s what I do.

Culinary School: Learning in the Cafeteria

I was learning cooking in a culinary class in high school, in Croatia, and I was working in the high school kitchen, preparing lunching for everybody, that’s how I really started enjoying doing it.

Later on I started working with my uncle and my mother, in the town where I am from – he had a nice beautiful restaurant – and after a year, I started grilling mostly seafood, pork chops, steaks, in front of the customers. The customers would watch me grill for them: langoustines, squid, octopus. Croatian cuisine is very, very heavy on seafood. The Asiatic Sea is one of the cleanest waters in the world. It’s crystal clear, and we have lots of good fishing there.

The Dalmation region in Croatia was under heavy Italian influence for many, many years. We were under Asian influence, Roman influence… everyone was building cities and walls in the Asiatic Sea region to protect their countries from attacks from Turks, Hungarians, and… everybody went through Croatia. We had lots of Italian influence. In the islands, people speak perfect Italian. Even under Croatian borders, because there are hundreds of islands that are heavily influenced by Italian culture. I speak very very little Italian, but I grew up with many Italians because so many of them vacation in Croatia.

Croatia is a very beautiful country. Most of the people who live in Croatia now work in tourism. We have lots of wineries, and wonderful food. It’s incredible. I go twice a year, my mother is still there, and I see my sisters.

We cook just like Italians. We have great pizzas. Great pastas, and everything else Italian. I read once that the Italians took the recipe to make dough for pizza in early 1900s from Croatia to Roma. That’s how they started making pizza. We have exactly the same dough, except we make it with spinach. Just a little different.

Landing on Another Coast

I came to the U.S. because my brother was working for French chefs in New York. When he got married, he went on vacation to Morehead City on the Atlantic coast. He saw that there was an opportunity to start a restaurant with just a little money – that was in the 80s. He started the restaurant without me, with the help of some cousins, and after I was here in 1985, I started working with him. Our business was booming, especially during the summer. It was crazy, we grew out of the restaurant, and we expanded into the upstairs where we had been living. Then we added porches to add seating. It was just growing and growing.

I moved to New Bern, to open another business, and my brother moved to the mountains to open another business. He left the boys, who had gone to culinary school, to work in Morehead City.
Fourteen and a half years in New Bern was a long time… I had been planning a long time to move to Wilmington, but I didn’t have the money to start another new business. New Bern was doing good for us, and we had a lot of good clientele, but not enough. They would just come to eat on holidays, not year round. But, we survived.

I said,”Why would I want to be so long in this business and struggle like that.”

We looked around for a place to move. My brother moved to Raleigh. That’s were my son lives – Roko. We moved there, to help our cousin a little bit. Then after six months, my wife said, “We’ve always wanted to move to Wilmington, why don’t we try it now?”

So we found this place, and bought them out – it had been a Korean restaurant that wasn’t doing so well. Me and my wife we worked for two-three months to set the place up the way we wanted it, and then we opened.