“Don’t judge a book by its cover.” This quaint piece of advice is older than anyone reading this, and in most cases has nothing to do with a book. It’s typically a preconceived opinion we have about someone or something that turns out to be dead wrong. There are a zillion examples of this adage like that big, mean-looking biker guy in your neighborhood that everyone gets out of the way for who is actually riding his Harley to go read books to sick kids in the hospital. Or, how about that ugly, old dog that no one really liked until he alerted his family that the house was on fire and actually rescued the cat. Yeah him. See what I mean?

Well, I just had one of my own examples the other night.

I was driving down Market Street hungry and in one of those “I dunno what to eat” moods. In a town with so many options for where to strap on the feed bag, I couldn’t decide on anything and realized I was on track for a hot date with a PBJ. Cruising past Fermental, I looked in the lot with hopes of finding a food truck. Don’t judge me, I’ve found some of the best dining in town in food trucks and Fermental seems to be quite the nesting place for them.

I saw a non-descript green trailer parked in the lot and decided that no matter what they were cooking and selling, it was far better than anything my old loaf of Wonder bread and jar of crunchy Jif could come up with. As I walked up to it, I had a lot of questions about this trailer and what they might be serving. Was this actually a food truck? What did they serve? Would it be good? Where’s their logo? Did I make the right choice by standing up Wonder Bread and Jif on our date?

As I stepped to the front of the trailer, and saw the line of people waiting to order, I knew that I had struck gold. I had found the “Little Chef” Food truck. 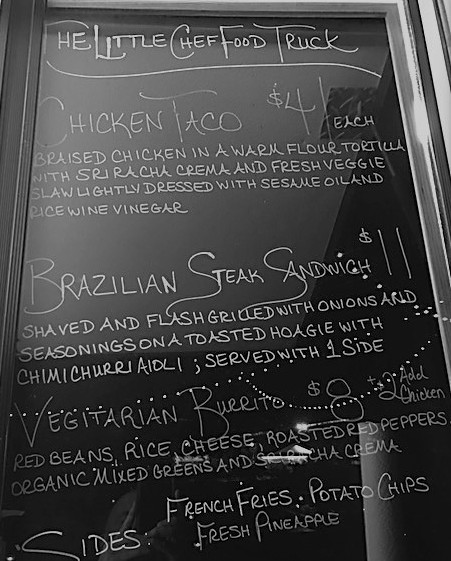 The “oooh inspiring” smells wafted through the air, found my nostrils and took up residence in there while making my mouth water and I hadn’t even seen the menu yet.

You know when you just get a certain “vibe” about someone? Like, you just met them but you knew they were the kind of person you could totally hang out with? Well, that’s what I got when I stepped up to the window and met Sharon Poole. Her smile was about a foot wider than the food truck itself and she was genuinely excited to be doing what she was doing. I put in my order for chicken tacos, because tacos are delicious, folded up little books of everything that is good and pure in the world and a perfect “go to” for trying out a new place. These tacos turned out to be a great example of just that.

As I waited for my meal,(because something as good as that chicken just doesn’t happen… you have to assemble that goodness), I struck up conversation with Sharon and her partner, Chef Deb Arche. Chatting with them was like hanging out with your friends next door, and within a few very short minutes, we were laughing and joking like we’d known each other for quite a while. I love getting to meet new people and these two were a blast to hang out with. But come on, let’s not get it twisted, I needed those tacos!

The braised chicken was treated to a marinade of top secret spices from Chef Arche’s Cuban heritage but I immediately could pick up on a little garlic, black pepper and a lot of awesome. The chicken was topped with a Sriracha crema (be still my heart) and the slaw carjacked my taste buds and slapped them around a bit with every bite. The crunchy slaw, prepared with sesame oil and rice wine vinegar, was the perfect, yet unexpected topping for these little folded up booklets of culinary delight. 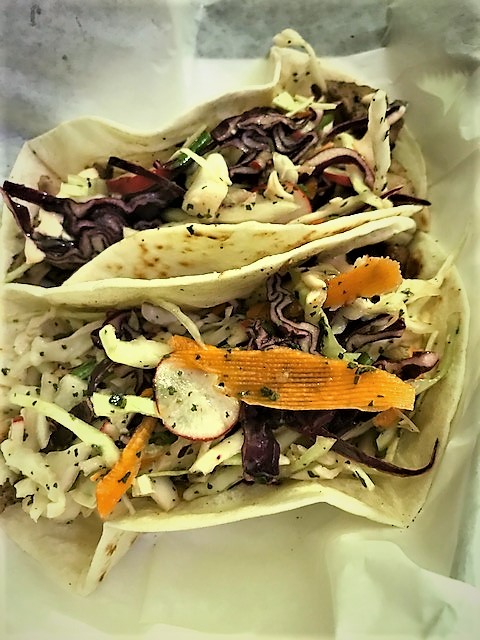 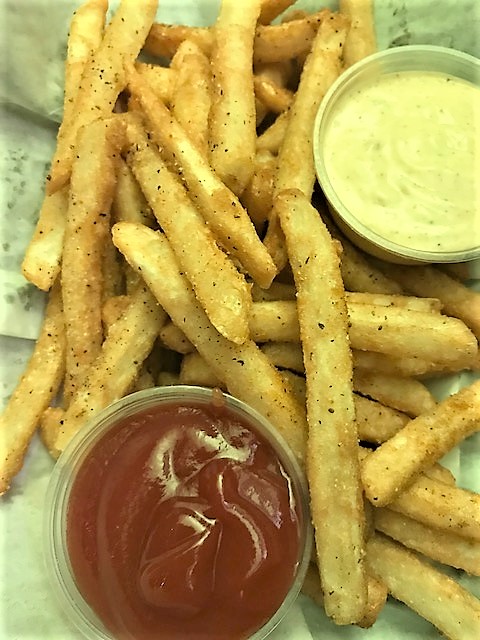 I’m usually pretty good at getting a first impression of a dish, letting the flavor bounce around my taste buds and in my brain for a while, then coming up with a memory of what it reminds me of. But I couldn’t with this. I mean, yeah, the chicken was delicious and had a great combination and depth of flavor and spices, and the slaw was to die for, but I just couldn’t put my finger on what it reminded me of. As I asked the chef about the ingredients and how she prepared them, she said one word that made it clear for me. She told me the most important ingredient in this, and all of her dishes, is love. BAM! I instantly knew that in this one taco I could taste a backyard barbecue at grandma’s house. I could almost see the chicken, crema and slaw in a giggle-filled dogpile in the back lot of Granny’s house.

“Food is love,” said Chef Arche, “and all my dishes are full of that.” Well, the tacos certainly were a great start to this love story, but I had to try more. I ordered a side of French Fries with a lemon aioli; I mean c’mon, who DOESN’T love fries, right? Let’s keep things in perspective, though. To me, fries are like pizza. There’s no such thing as bad ones, there’s just varying degrees of good. These fries were delicious and I admit that a lemon aioli is probably one of the last things I would’ve normally thought to put on fries but ketchup and ranch dressing might need to keep their eyes on this rising contender in the fry condiment pile. As I tried to say how good they were through a mouthful of fries, I saw the chef and Sharon looking at me and smiling. “Right?” they said, as if to once again laugh at a previous non-believer. “Mmmpf, ooh, mmmmm, aaaah,” was my response. Apparently I wasn’t the only one that night who was enjoying the food. The chef has spent years making comfort food at a whole new, internationally inspired level, and Wilmington crowds have been eating it up. Literally.

Having eaten more than I should have, and gladly so, I thought that since I had to eat lunch tomorrow, I might as well multi-task by getting it then and there. I asked if they had a recommendation and just as I heard the first syllable of “bri…” come out, I knew that one of my favorite things was what they thought I needed in my life and I agreed. BRISKET!

Don’t threaten ME with a good time!

The brisket was cooked low and slow and as the chef proudly explained this process with a bright smile on her face, you could tell she was going back in time to Miami when her Cuban family taught her their way of doing it. Speaking of spices and temperature like a parent would beam about little Tommy’s prowess on the T-Ball field or little Sally’s unquestionable future as a ballerina, the chef described her food with the same pride and adoration. Pile about a metric short ton of that brisket on a cloud-like Brioche with some fried onions and an aioli that was imported from Delicious-ville and that’s what I got to smell the whole way home and feed my face with for lunch the next day. Okay, I might have had just one bite (okay two) for breakfast the next morning.

Speaking with Chef Arche and Sharon, we talked of fresh ingredients, their inspiration for the truck and their dreams of a “brick and mortar” restaurant in the future. They say they enjoy the truck and catering events all over eastern NC so much that the restaurant may be more of a long term than a short term goal but that no matter what, they just want to keep feeding people and seeing their customers smile. They’re obviously having fun working together and making quite a name for themselves in the non-descript green trailer that lured me into the lot that night. They’re good-hearted people who enjoy feeding their customers (who they greeted by name over and over again) the freshest ingredients they can get and putting lots of love into their dishes. You don’t need a fancy logo on your truck to do that, and from the lines of people I witnessed at the Little Chef that night, everyone was far more interested in the LITTLE CHEF book than the cover. After leaving to write this Little Chef Food Truck review, I realized my mistake in questioning that book by its cover. They delivered way above expectations and the last time I checked, that’s a critical ingredient to success.

As a parting note, remember how I said you just get a certain good vibe from people sometimes? Well, as I walked away I read on their menu sign that their tips go to help rescue animals. See? That’s what I’m talking about! As if your delicious food and your amazing personalities weren’t enough already… you won me over with that.

I look forward to my next visit to the Little Chef and I hope to see YOU there.

Like The Little Chef Food Truck and Catering Company on Facebook, and find out where you can find some killer food.