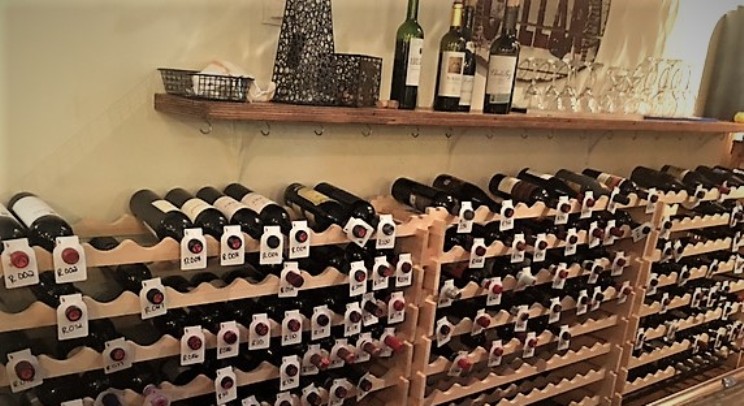 So you’re sitting there in your living room, probably reading about something awesome on Port City Foodie, when your 3-year-old runs by at warp speed wearing a bath towel tied around his neck as a cape. “Look, I’m Superman!” he yells. You reply, “Uh, yeah, sure buddy, you’re Superman.”

Note at 10.2.2017:  “It is with great sadness and regret that we are announcing the closing of the Epicurean Grille effective immediately. While we still believe wholeheartedly in the market niche that the brand was trying to capture, and we are glad that many guests were able to experience what the EG had to offer during its all too brief existence. From the beginning, we knew that The Epicurean Grille was a long shot in that it was an ambitious attempt to turn a building that had spent its 50+ year life time as a neighborhood bar into a classy casual restaurant virtually overnight. While the reviews from the market were very favorable, the guest counts were nowhere near high enough to overcome the out-sized debt payments that it had to absorb from five years of substantial losses incurred by its predecessor.”— The Pub.

Minutes later, after a couple superhero laps around the house, he returns sans cape but high stepping with his mouth open, roaring and extending his chocolate-smudged fingers like little dinosaur claws. “Look, I’m a T-Rex,” he exclaims. “Yup, you’re a T-Rex,” comes your reply. Minutes later he’s a cowboy,
a cop, maybe a wizard or whatever other costume leftovers he might have, but he embraces each of these identities with vigor. Why? Because he’s 3-years-old and that’s what you do when you’re young. Or a member of the Village People, but I digress.

Creative “identities” aren’t limited to kids though. In one case, a local restaurant has embraced several identities in the past. Thus far, preliminary observations of its NEW persona show that this might be “the one” the owners (and Wilmington) have been looking for.

Epicurean Grille, a new place just recently opened on Eastwood Road next to Sweet n Savory Cafe, has been many things in the past – most notably a local watering hole called “Kefi” that had a robust and fiercely loyal patronage, “The Pub” which was an attempt to “gussy up” Kefi into a more refined watering hole that unfortunately didn’t do so well, and now a restaurant clearly in chrysalis. 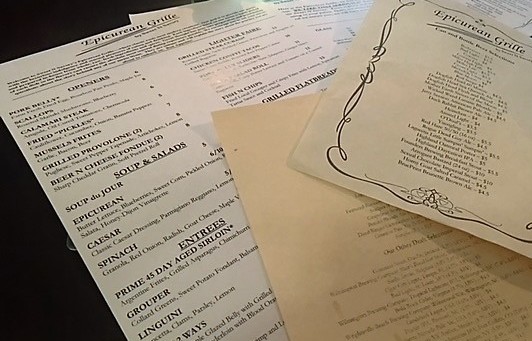 I had the opportunity to try the Epicurean Grille when I received a most gracious invitation from the management to dine there, even though it had only been open for a few short weeks. Pulling up to the place, it was still Kefi to me. I’m sorry but some things will always be one thing in your mind, regardless of how much they change. You know, things like how your child will always be 3-years-old with his towel cape running around the house claiming membership to an elite club of superheroes, or how James Gandolfini would always be Tony Soprano regardless of his follow on roles, or how the guy on the Farmers Insurance commercials would always be that hardened, incarcerated criminal he played on “Oz.” So, that being said, I was hard pressed to find this new venture as anything other than its former identity.

Until I opened the door.

The place had obviously had one heck of a facelift, and a fast one at that! In the matter of a couple days, The Pub was transformed into the Epicurean Grille, and while the layout of the place is still a fierce tug of war between its “neighborhood bar” roots and its new restaurant persona, the future plans for the place will erase any question as to what this place truly is. The pool tables will be gone, new wall coverings are in the process of being sourced and the memories of cold brews from past will be forgotten as the winds of change blow through Epicurean.

As I walked in, I was pleased by the aesthetic appeal of the place. It was nice but not too fancy and had a comfortable feel; somewhere you’d actually like to take the family, meet a friend for lunch or enjoy a “date night” with your significant other while away from the aforementioned Superhero/T-Rex/fireman. 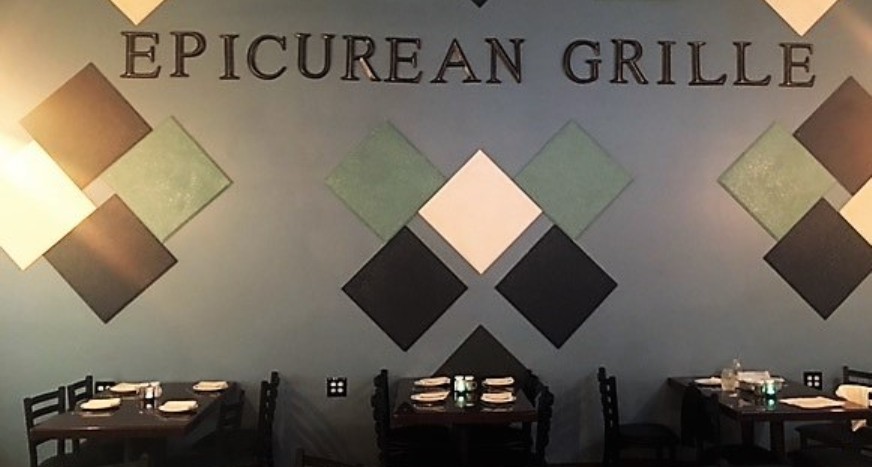 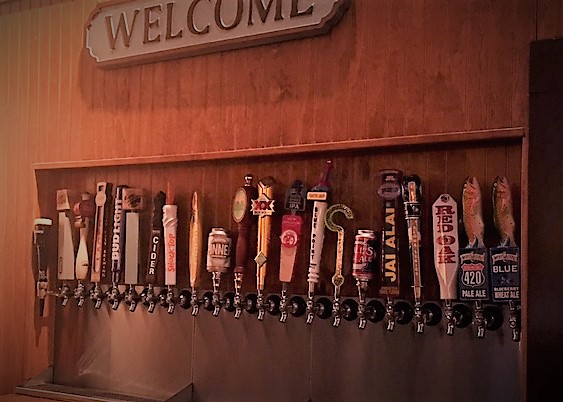 Epicurean Grille has an extensive drink selection, and I mean extensive like Imelda Marcos’ shoe collection or the cumulative amount of plastic surgery seen on any of those “Housewives of… ” shows. When I sat down, I was handed five menu sheets, some printed on both sides, but only one page was food. The rest showed a voluminous listing of beers, cocktails and liquor as well as an extremely impressive wine selection of more than 200 bottles that several patrons were exploring during a regularly scheduled wine tasting Epicurean Grille hosts. Being the knuckle dragging Neanderthal that I am, but TRYING to be somewhat refined, I quickly opted for a neat Bourbon and immediately explored the food options. After all, I wasn’t there to drink, I was there to eat, so the quicker I could strap on the feed bag and get to business, the better. It was all about the food. 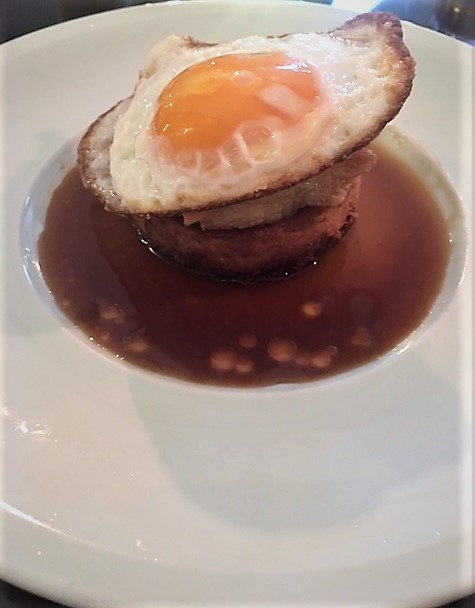 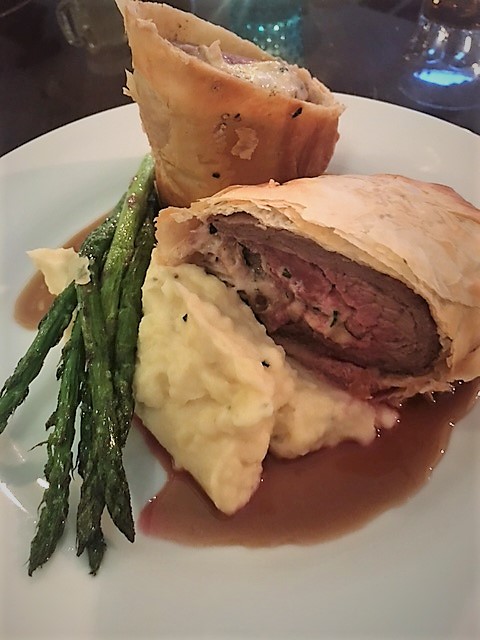 Looking at the menu, you could tell that meticulous planning and effort went into it. After carefully weighing all my options and several minutes of deliberation, (even more thorough than choosing my Fantasy Football team), I chose a pork belly appetizer, served with a Pain Perdu (fancy pants food talk for a close cousin to French Toast), a light maple jus and topped with an egg. This was delightful, as the maple bounced around the pork flavors, gave the Pain Perdu a hug and then sat back and watched while the glorious egg melted into the whole plate of goodness like a warm blanket on a cool Fall morning. The easy comparison would be to a nice brunch dish – I mean hey, pork, egg and French Toast are always staples – but this took it to another place. A really nice place, maybe Charleston-esque but without the light blue pinstriped linen pants, bowties and designer sunglasses.

I have to admit that the open bar area and pool tables on the other side of the partitioned wall threw me off a bit and were distracting, but savoring the pork belly nirvana that I had just experienced kept my mind (and taste buds) in a happy, “rose colored glasses” place as I waited to tear into my incoming entrée.

When I saw Beef en Croute (aka Beef Wellington for all you Gordon Ramsey fans out there) on the menu I instantly knew that I had to try it. Why? Because it’s delicious. And it’s easy to screw up. Hey, the owners wanted me to try their stuff and give them an honest review, so that’s what they’ll get. So bring it on Epicurean Grille chef, let’s see what ya got! The chef, who has local roots but extensive experience in New York restaurants, returned home and made it known that when it comes to food, he can kick it up like nobody’s business. When the dish came out, it looked nice but not pretentious. The puff pastry was flaky and light (like it’s supposed to be but oftentimes ends up burnt or soggy in far less skilled chef hands) and the meat was tender and juicy while the mushrooms, Boursin cheese and lump crab reminded you that this meal was very upscale, despite the extremely affordable price. The Burgundy Wine reduction was sublime and comes from a bottle of Pinot Noir that I couldn’t pronounce the name of and costs more than I’d ever be able to afford, but was truly a testament to Epicurean Grille’s dedication to making sure that flavor comes first.

Epicurean Grille’s owner, who also owns Sweet n Savory Cafe, told me that his goal with this place was to give his customers an Americanized version of a night out at a European café – great food, great wine and laid back atmosphere – without breaking the bank. “Rich people shouldn’t be the only ones eating fancy food,” he said. “I want EVERYONE to be able to get “upscale” food without the upscale price.” Well, check that box complete. 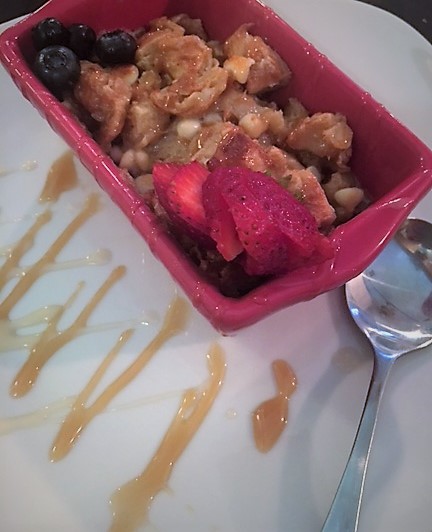 Next came dessert. Oh, that luscious dessert. “Twisted Bread Pudding” called my name. I mean, come on, how could I NOT choose it with a name like that? Traditional bread pudding with hints of caramel and white chocolate served with an Amaretto Cream Sauce. Sign me up for that! The bread pudding was delicious and the Amaretto let the dish speak for itself without interfering but let its presence be known by accentuating the dessert perfectly. You know, kinda like a chaperone at a school dance – there to make sure everyone has a good time without anyone having too good of a time. Well, I had one heck of a time with that dessert and the meal overall.

The service was great. Never was my glass empty nor did I have a question that wasn’t answered. In fact, the staff reminded me of a NASCAR pit crew as they bounced from table to table making sure the guests were well taken care of and having a great experience. From the diverse assembly of patrons, I saw one common thread. Everyone seemed to be having a great time whether eating, sharing drinks or both. Isn’t that what dining out is all about?

I’m going to go ahead and say it … I can’t believe they serve the food they did for the prices listed. A 45-day dry aged steak for $17? Are you kidding me? Cioppino served with more seafood than one of those Alaska fishing show vessels for under 20 bucks? Come on, seriously? I would’ve bet the farm that the prices would be much higher, considering the quality of the food, but I’m glad that the “approachable” pricing Epicurean Grille chose is there. It WILL let everyone get that “upscale, fancy food” without the high prices or uptight attitudes.

I’d like to thank everyone at Epicurean for a great dining experience, and for the invitation. That’s a bold move to invite someone to review, knowing that your restaurant is in transition and is in the beginning stages of its transformation. But I think it speaks volumes that regardless of whatever “identity crisis” the building is in the middle of, the food is the focus at the Epicurean Grille and there’s no denying EXACTLY what it is… delicious.

#Sponsored | Disclosure: I have been comped a meal as part of this review on Port City Foodie. Although the meal was a gift, all opinions in this review remain my own, and I was in no way influenced by the company. – Ed