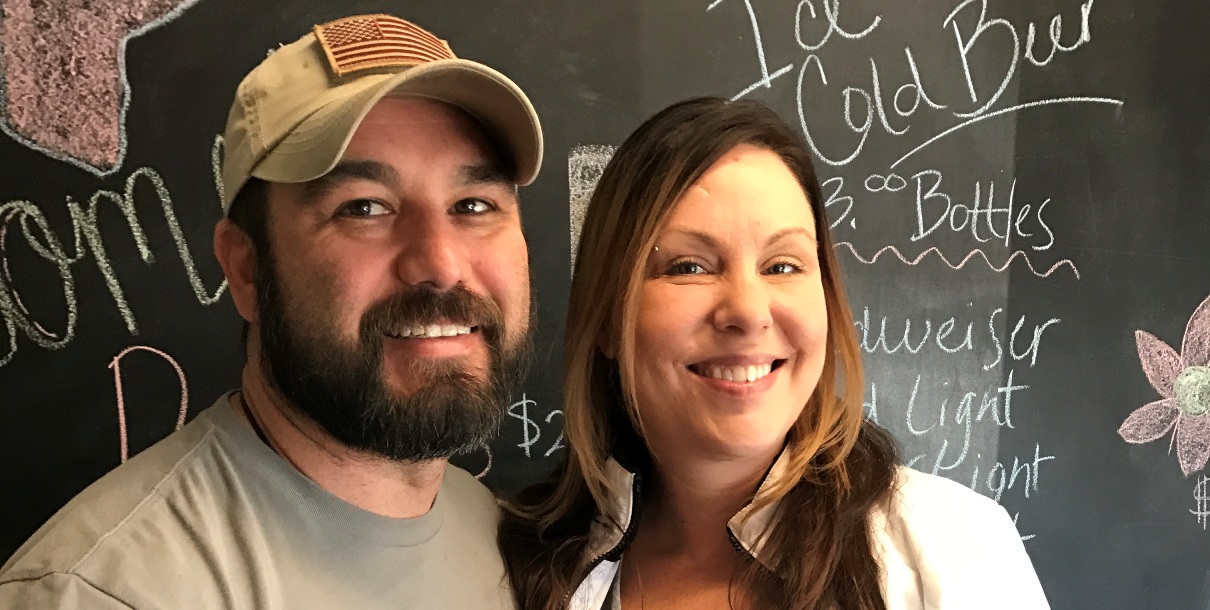 “Next phase of the Bone and Bean barbeque operation: this spring, we’re putting in an outdoor bar and make it like a Texas roadhouse. Like you’d see back home, with an awning, little beer area, and a band setup.“

Pam: It was really surprising how excited people were when we opened six months ago. We had never done a restaurant before. Our customer base is really concerned for our success, they are really supportive. It was really shocking, we had regular customers right away, including a lot of people who have their own restaurants.

Chris: It was a brand new experience. Now we have a little restaurant family – we get used to seeing the same people every week, our regulars. That’s the coolest part of it. We get people from the beaches, 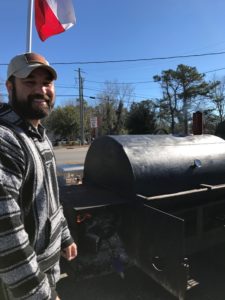 and even people from Jacksonville who come down just to eat here.

I’ll tell you what happened that first week… I was like what did we get ourselves into.

We had always wanted to do a restaurant or a bar, and we decided that a bar would be too many late nights. Little did we know. We’re still doing late nights, but that first week we opened, I stayed the night up here, tending the smoker at 4 hour intervals – I still have a pillow and a blanket here. You have to put a lot of work into it, but it pays off. There is nothing like our product in the area; you can’t get slow-smoked like Bone and Bean barbeque.

Everything we do has no sauce on it. We dry rub it, and then we smoke it long, and slow. We put our brisket in the smoker for about 12 hours, at 220 degrees. By the time it comes out, it’s full of smoke and the only thing we do is put salt on it. The main difference between us and Carolina barbeque is that Carolina is a vinegar-based barbeque. We didn’t know that bbq here is synonymous with “pulled pork.”

Pam: People would come in and ask for a plate of barbeque, and we would ask them, “What kind?” They looked at me like I was nuts. They were only thinking pulled pork. And I would offer brisket, and all the other options on the menu.

Chris: We got a lot of strange looks when we first opened. We actually learned how to do pulled pork. We added it to please our customers…

Pam: … that, and it tastes really good!

Chris: I’m from Denver City, Texas, right outside of Lubbock.

Pam: I was raised in Washington State. We came to Wilmington for jobs originally, which Chris has quit, and I still work at mine. We’re having a blast here. We have some really good people working with us and we’ve got a lot of creativity in the kitchen. Like the French dip, which isn’t a French dip… it’s made with brisket, and jus from scratch. It’s really wonderful. 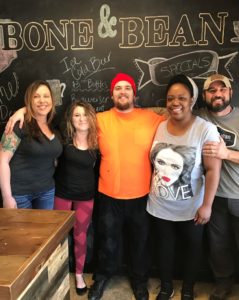 Chris: That’s probably one of the best sandwiches we have coming out of the kitchen. It’s smoked brisket, and we put pickled cactus on there, and carmelized onions, and pepper jack or provolone. It is phenomenal.

Pam: I take care of the potato salad, the slaw, the mac and cheese, and the desserts. Chris has the meats, and the beans and cabbage. 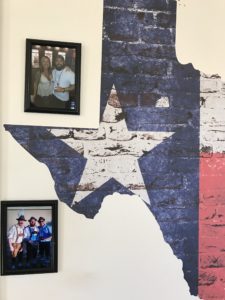 Chris: When I was growing up, my dad did the barbeque circuit in Texas, pulling his Lone Star smoker around. I think my dad would be proud of Bone & Bean, but he’s a purist. He hasn’t seen this operation yet, but when he comes out, I’m sure we’re going to get an earful… what I’m doing wrong.

Pam: [laughing] We were tooling around with the idea of making our own sauces, and we called his dad, and asked how do you make your barbeque sauce. And he said, well, you go to the store, and they’ll have a bunch of them there. We were like, come on, you never made your own barbeque sauce, and he was like, no, why would I do that? Why put sauce on something that is perfect?

Chris: We get a lot of people in here who love the variety. We’re not like Carolina barbeque – people like it because it’s different. We got nominated for Best Ribs in Wilmington. We were ecstatic to be included after just a half a year. We’re excited to see our name anywhere. This year we will do Ribfest.

Pam: A lot of times when people get their food, sauce is tricky. You either get too little, or too much. It’s a lot more common to get too much, and that’s the biggest complaint about Carolina barbeque. Here, you can have it however you want it, and people like to add their own.

Chris: We took on a lot for our first year. We did smoked turkeys for Thanksgiving, 58 of them. We’ll manage better… we were nuts. It’s all a learning process. If we’re going to do more, we need to get another smoker. We had buckets and buckets with ice water, brining turkeys. Then we had to smoke them all.

Pam: It was a crazy, everywhere we stepped, there were buckets of turkeys. And then at pickup time, we had 46 people here to get their turkeys. We’d probably stagger it next time. But it was fun. We had just put our POS system in, but we started it on the busiest day of the year, on a Friday, but it came in the mail on Thursday, and I was excited to get it running…

Chris: Yes, she was like, I’ll just hook this thing up and use it. We had disconnected the other credit card machine. Of course, we’re sitting here trying to figure out how to use this new system, and we had a huge crowd in the restaurant.

Pam: Trial and error. This is how we learn. We had actually never worked together before we launched the restaurant. We keep our duties very separate. When you have two people trying to do the same thing, if they live in the same house, that’s a recipe for divorce. I have the foods I take care of and I do the books, and schedules, Chris has the foods he takes care of and runs the operations.

Chris: We’re getting better at balance. We can get out of here in the afternoons, so we actually have time to have a family dinner… [laughing] and we look in the fridge, and there’s some mayonnaise, and some ketchup, and the jam is long gone. And maybe some string cheese.

Get a jump on your SUPERBOWL PARTY with bulk wings and Texas style BBQ or book your private event with
Bone & Bean
or call 910.833.7383