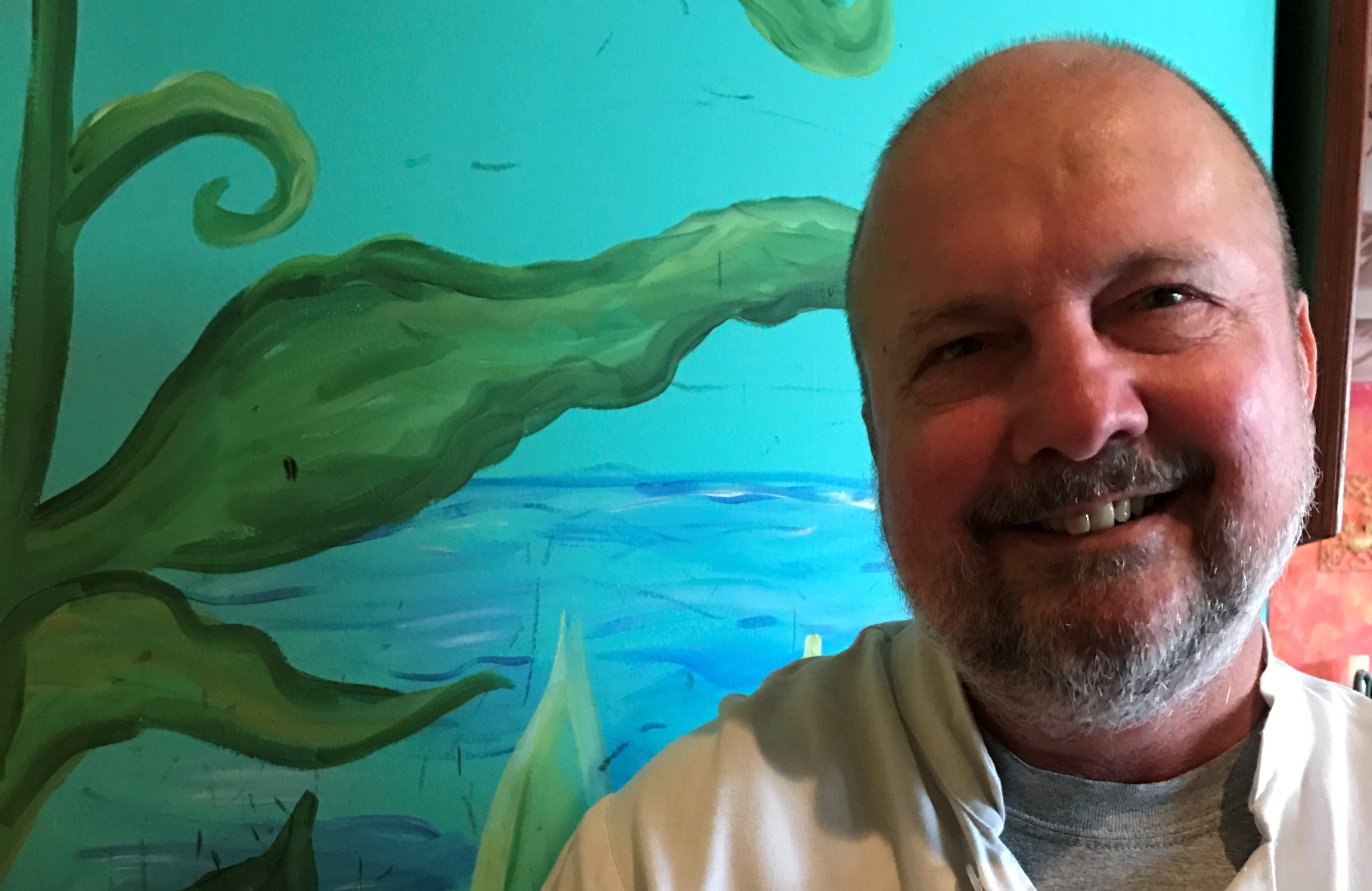 “I think the people who become known chefs… it’s a smaller percentage than those who become all-star basketball players. So you have to love it. I tell people all the time, it’s hot, it’s hard, it’s dirty. It’s hours and hours. But if you love it, it’s very, very rewarding.“

Growing up in the Islands

I spent many, many, many days in Puerto Rico, just day-tripping. When I was growing up on St. Thomas, there was no real store, for school clothes and stuff like that, so we would fly over at least once or twice a year, and go to La Esquina Famosa in San Juan. It’s an old department store – we would get school uniforms and socks. We’d go over in the sea plane, have lunch in Old San Juan, and then fly back home.

I identify as a Caribbean Islander. I grew up on St. Thomas, as did my dad, and my grandfather. My great grandfather was originally from St. Barts. It’s really interesting, we did our family roots thing, and found out that we got to the Caribbean from Normandy, in France. So my family has been immigrants from many places, and in many generations.

My wife and I met on St. Thomas about twenty years ago. I was a serial mover, and so was she. I had lived in San Francisco a couple times, and went to school in Santa Cruz. She’s from upstate New York. I would go somewhere, and then go back to St. Thomas. It’s easy to be mobile when you are young. It’s harder when you are older and have responsibilities – it’s not a vacation, and you’re not just eating, drinking, working really hard, and going to the beach. Making rent and that’s it. So, my wife was looking for work, and she found a job in Wilmington, and I could pretty much go anywhere and get work, so we came. That was about ten years ago, when our son was just one. 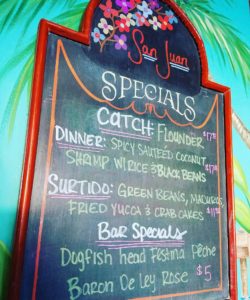 The biggest misconception we have about San Juan Cafe is that we are exclusively Puerto Rican food. So, we get a lot of, “Why are there tacos on the menu? Why are there burritos? Why is there this, or that?” But, first of all, we are in Wilmington. We can’t have just Puerto Rican food, there’s not the market for it. And second, I choose to do what I call contemporary Latin, that means that I have carte blanche to do everything from Madrid to the tip of Chile. And I avail myself of that opportunity, to keep it interesting for me. The Caribbean is very big, and there is lots of fun food you can do. You can get Dutch food, you can do French food, I mean, you do a lot of Spanish food, but you have to do food that people can recognize, too. That means that I put nachos, tacos, burritos… something like that on the menu, and go from there. Once people eat here, and they’re happy, and the food is good, then you can whip a mofongo on them. But you’re not going to do that right off the bat. 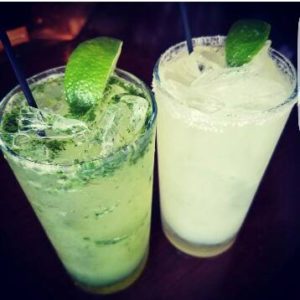 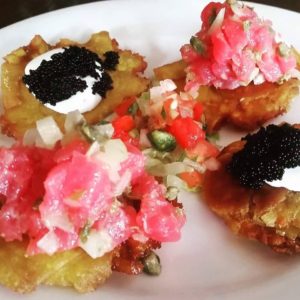 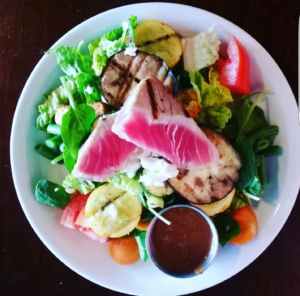 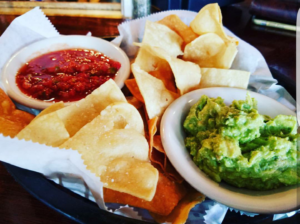 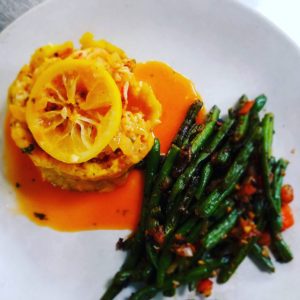 This is the kind of food I like to eat too. I cook all the time at home. I’ve got a wife who is also a very good cook, and we love to eat. And our eleven year old also likes to eat. I work so many nights, I wouldn’t get to see my family, but we are closed on Sunday, so that’s my day to cook at home and that’s our time. I sit and commune with my family, over the kind of food I love.

The challenge in being a chef and an owner is all the ancillary stuff, the things besides cooking. You know, the taxes, the books, all that work. But I’m lucky, because my partner Jason handles all that kind of stuff, and I can concentrate on the kitchen and the food and the food costs and making everything good. Making sure that’s right. The nuts and bolts part is my least favorite. Looking at a profit/loss statement is not my idea of a good time. I love being in the kitchen. It’s very satisfying to make people feel good with the food you serve. A lot of our patrons are also chefs and owners of restaurants. That tells me we’re doing it right. 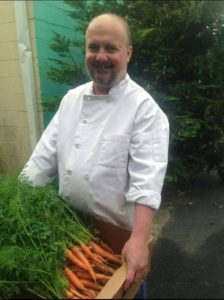 Before San Juan Cafe, I owned a restaurant in New Jersey, called Hipolites Cafe. Me and my partner from St. Thomas – we had met at a fine dining place there – opened it. We changed the menu every week to keep it interesting, and had a network of local farmers that we used, just whatever was good, that looked good, that we could use. I had a couple ex-Wall Street brokers who would go to the seacoast and I would give them a small budget and say, “See what you can find for the week.” They always came back with something interesting. People liked it. It was always fun, it was always a challenge. But it didn’t last. Into our third year, 911 happened. I drew from that Midtown, Atlantic Highlands area, and our patrons were all in that building. And so, when those buildings went down… two of my best customers died in Tower 1. It was devastating. Our business was gone. Bad times.

San Juan Cafe has been here in Wilmington for seven years. I’ve been here for five of the seven. The opening chef, Danny Keegan… my wife is a nurse-midwife, and she delivered his first two kids. She thought it was funny… we came all this way from St. Thomas, and she was delivering babies for a family from St. Croix. He was working at Osteria, I think, and we got to talking, and we planned this all out together, to do this, a Caribbean theme restaurant, and as we were ready to move on it, my wife lost her job. You don’t go opening a restaurant when you have work and your wife doesn’t have work. I was working at Siena; I was the chef there for two years. It took a couple years for her to get settled again, and for me to burn out. I stopped working there, and was casting about, and I hooked back up with Danny and that was five years ago. 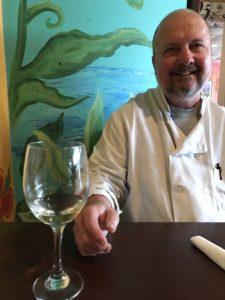 Learning at the chopping block

I like food. I’ve never been to culinary school. I started as a dishwasher 35 years ago. I’ve worked in tons of different places, and different kinds of food. I’ve probably done Italian the most. But that’s just because anyone who has done this a long time has probably done a lot of Italian food. In San Francisco, I would farm myself out as free labor to whoever would have me to just chop vegetables – you know, at my favorite Burmese place, my favorite sushi place, my favorite Japanese restaurant, my favorite Chinese restaurant – just so I could see what was going on. Just learn by doing it.

I’ve had very, very, very generous people my whole life, who haven’t been closed with their skills. If you want to learn, you can learn. I tell people all the time, the best thing to do, if you think you want to do this, is forget the $20,000 a year education, go knock on a kitchen door and say you’re eager, and say that you don’t have to make much money, and someone will take you in. And, you’ll find out immediately if you want to do it or not.

Check out flavors of the Caribbean at
San Juan Cafe