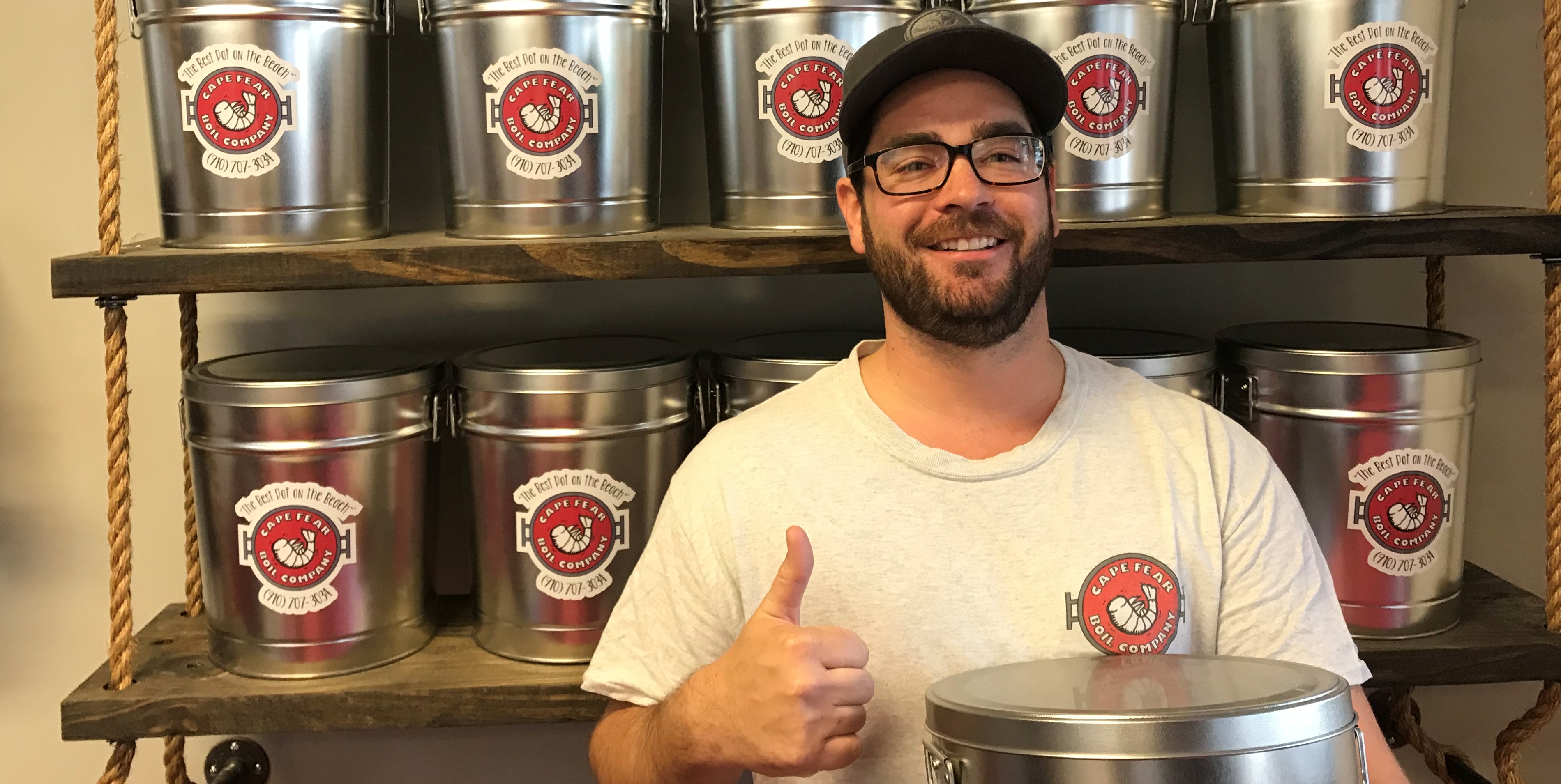 “The Cape Fear seafood boil business concept was not a home run as a senior project at UNCW, but as a real life project, it’s a Grand Slam.“

This is almost our first full year here – it will be in March – but we’ve been doing this concept in the Outer Banks for a long time now, it’s been five summers there as Outer Banks Boil Company. We’re a glorified prep kitchen: we do to-go orders with the buckets, personal sea-pots to go for couples, smaller groups,

under ten people. Our main thing is catered seafood boils.

The majority of the boils we do are for vacationers. If you come to the beach and it you rent a big beach house that sleeps twenty people, with kids and friends, it would be hard to get a restaurant reservation. We bring an authentic low country boil to them; we take the bigger pots, utensils, and a propane burner, and literally everything needed for the meal, and we go out to their vacation home, setup, cook right on site, we serve – it’s a big dump on a tablecloth – it’s super tasty, it’s easy.

This was actually our senior project at UNCW in the Cameron School of Business. My partner Matt Khouri, he was the mastermind behind this. He runs the Outer Banks location now, in Corolla NC. He got a terrible grade on it. It was like a low C or something like that. They didn’t like the idea. Or maybe Matt had a little bit of senior-itis. But here we are, making the traditional Cape Fear seafood boil a to-go and catering success.

Matt’s family has had a house on the Outer Banks his whole life. Being up there, on the beach, they did low country boils as a family. I’ve always vacationed down here growing up, too. We’d be on Wrightsville, on the Outer Banks, up and down the coast. I knew I wanted to end up here. We really had a sense of what people wanted to enjoy as part of their vacation experience.

Matt turned that concept into the senior project, and he started out doing ten catered boils that first summer, out of our apartment. A few summers later, we were doing more than 250. 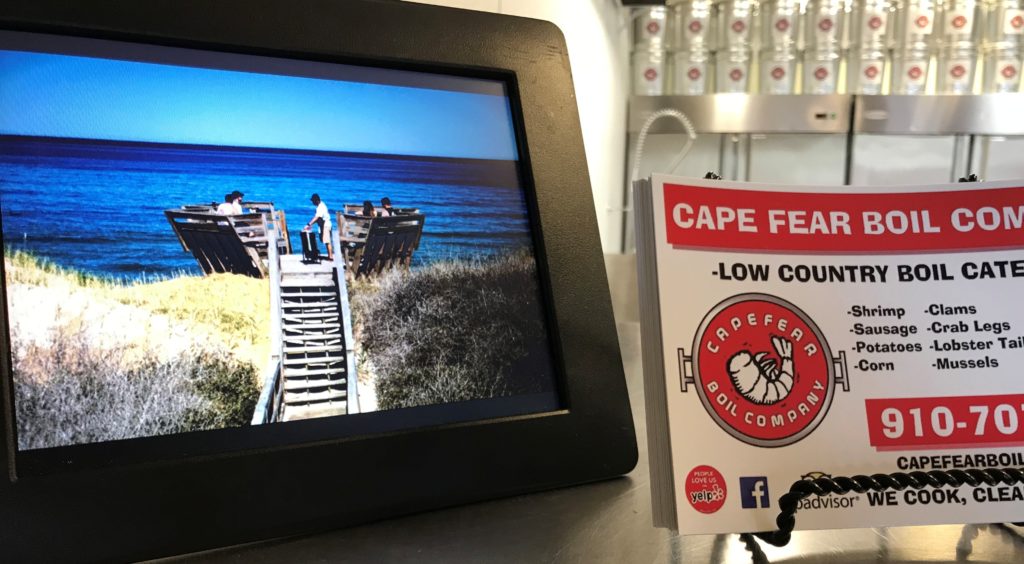 We love seafood, no doubt. I love shrimp. And oysters. Down here we’ve been doing a lot of oysters; at the Outer Banks we didn’t need to do them, but here there is a demand, for both raw and steamed. I’ve been getting Stump Sound oysters from Topsail, and those have been really good. We don’t include them in the boil, because they are sandy, and they will mess the rest of the food up, but we do a separate pot for oyster lovers.

There isn’t a lot to the process of a Cape Fear seafood boil. It’s about layering it, timing it, and serving it. We source all local shellfish, and local produce, the corn. We ship in the lobster and crab. We use a really good Andouille sausage that comes from Metairie, Louisiana. Right out of the Bayou, it has a great Cajun flavor that complements the seafood flavors. We go through a lot of seafood here. Last summer, we went through 10,000 pounds of shrimp. That’s Memorial Day through Labor Day. We are open year round, and off-season we cater to locals. We wanted to tackle more of the year-round market when we moved to Carolina Beach. At our other location, we only have a customer base of 200 year-round residents. It goes from 60,000 people a week to a ghost town. So, we close up shop for about five months in the Outer Banks. 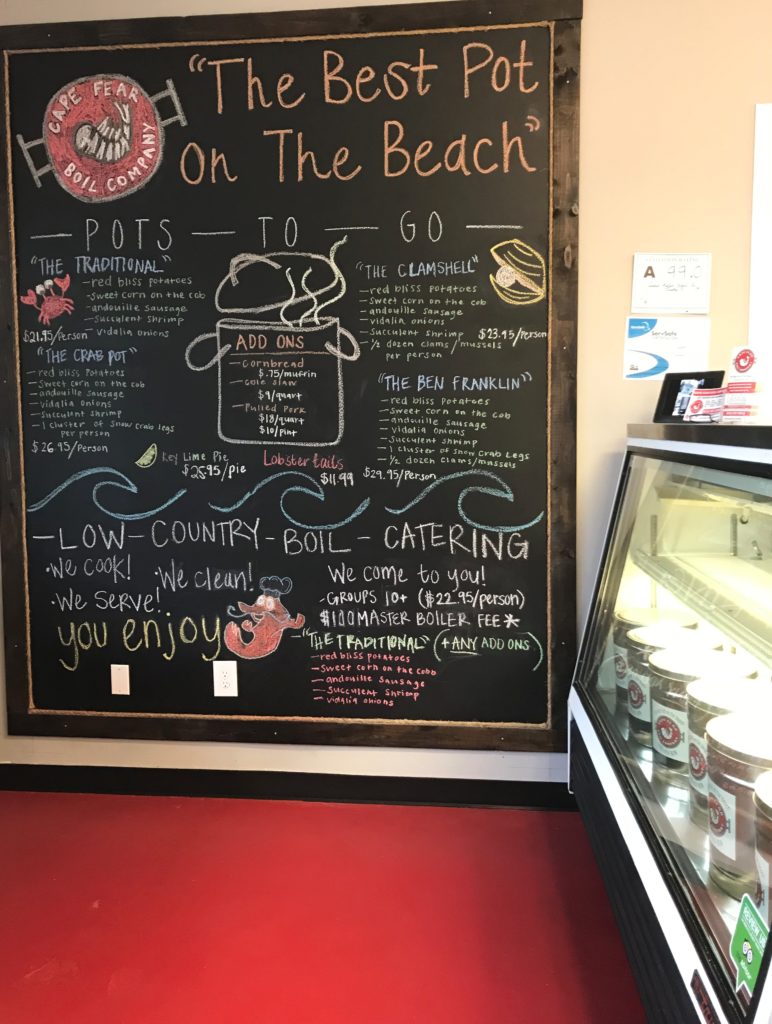 From the Carolina Beach location, though, we’ve been doing year-round catered weddings, to-go pots, a lot of call-ahead events, it’s super fun. We meet a lot of cool people. When they order a seafood boil, they really want to party, kick back, enjoy the party. They get to ice the beer and not worry about the food. It kind of works like a take-and-bake here. People call ahead, order from our super simple menu. We prepare the pot for them, send them out with the pot that has everything in it, and a little card of instructions. Basically, all they have to do is add water and heat it up on their stove for 20 minutes. We don’t do any cooking here; for them, it’s super easy to have a fresh, tasty seafood pot at home.

I live on the island, I’ve been here since 2009. This is home. We love being at the beach. That’s a big thing behind the concept, too. It’s just loving where we are, the whole coastal lifestyle. If you order a pot, we bring the restaurant to you and you can hang out on the beach, enjoy some food, enjoy your friends and family, let the kids play. You come right off the beach, and dig in.

I love the classic Cape Fear seafood boil, but we’re accommodating. We’ll do a vegetarian-seafood boil without the sausage, and we do pulled pork, too, for people who don’t love seafood. We are always open to doing the kind of food events that make people happy.