On Gratitude: Thanksgiving Thoughts from the Home Front 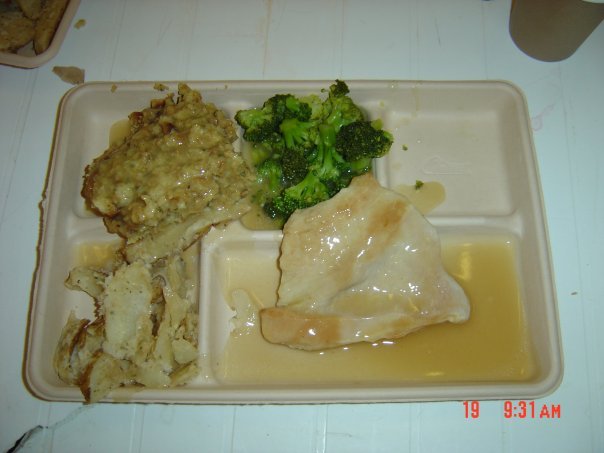 In a couple days, we’ll prepare an amazing feast to be shared with friends and family. We’ll typically gather around gorgeous place settings, a zillion side dishes and await the ceremonial entrance of a perfectly roasted (or fried-my favorite) turkey to get the festivities in full swing. A cool nip in the air, perhaps some football or family board games will also highlight the holiday and a day off never hurts anyone’s feelings either. It’s a grand time to eat until we say “I can’t believe I ate THAT much” and settle down for a little nap before round two (or three) of follow-on desserts round out the event.

Thanksgiving is also a perfect time to remember to be thankful for our friends and family, as well as all of the other blessings we have in our life. But sometimes in the midst of our own celebrations, we forget that not everyone gets to be home with their friends and family because they’re deployed overseas protecting our nation’s interests.

For 21 years I missed more holidays than I can remember because I was deployed to one combat tour or another, some foreign country I’d never even heard of until I got there, or a rotational deployment far away from home.

Don’t get me wrong, I volunteered to serve and was happy to do it, just as the hundreds of thousands of military personnel who are still in uniform continue to do so today.

But I post this photo so people will take a moment to include the troops in their own Thanksgiving thoughts.

This photo was taken years ago during a combat deployment to the Al Anbar Province of Iraq. Every year I post this on social media and email it to my friends with the hopes that they’ll take a quick moment during their celebrations to think of the brave men and women who are serving so far from THEIR loved ones. I’m doing the same here to share it with Port City Foodie readers.

As you gaze upon the exquisite fine china place setting, you see that the artistry of presentation was every bit as important as the top notch preparation of such a meal. I’m not sure if the chef was a Michelin star-rated celebrity or perhaps a James Beard Award winner, but it was sheer magic how the kitchen staff managed to perfectly meld the colors of everything into one absolutely amazing shade of… TAN. Yeah- the plate, the gravy, the things that I think were potatoes, the broccoli and the mystery meat we assumed was supposed to be turkey, was all TAN. Just like the sand we’d been in for months and would continue to fight in for many more months to come. Also notable was the masterful exclusion of any and all semblance of flavor except for the liberal application of our own personal stashes of seasoning blends and hot sauce that we liberally applied. After a sandstorm’s worth of Mrs. Dash (always a great combat seasoning condiment), my hibernating taste buds finally found a tidbit of flavor. I was glad to share this meal (and my highly sought after seasoning stash) with my closest friends during a quick break from the combat patrols and operations we had been conducting.

We had a lot to be thankful for that Thanksgiving and despite what the meal looked like, it was one of my most memorable ever. We had already been in some pretty bad combat, had lost some close friends and I had been wounded when fate placed a buried Improvised Explosive Device and myself in the same place at the same time. The IED won. As the television broadcasts from much safer areas of Iraq than we were in (the press refused to come to where we were because it was too dangerous) showed the “folks back home” a bunch of perfectly cooked, gorgeous, magazine worthy turkey dinners, this is what we got where we were at. Nothing against the men and women lucky enough to be in those areas who got to be squeaky clean and safe while eating some great meals; I’m glad for them, but it just wasn’t what we got. What’s that saying? Individual experiences may differ?

My friends and I laugh about it now and I hope that people will look at the photo and get a giggle as well. For what little we had and for what the cooks managed to make, we were thankful and appreciative. Isn’t that what Thanksgiving is all about?

Who knows, maybe seeing this photo and my scribblings will make someone think for a second that what they have is definitely worth being thankful for. Maybe they’ll thank Mom or Dad or whoever is doing the cooking for putting on a remarkable spread.

If someone feels inclined to invite a young service member who is away from home for the first time or a lonely veteran into their home to celebrate, that’s icing on the cake.

But I’d just like to ask that you take 30 seconds, look at this photo, get a chuckle and indulge in Thanksgiving thoughts for those who are in harm’s way so that we don’t have to be. Then, I’d like you to feed YOUR face with your beautiful turkey, laugh and spend precious time with those closest to you and truly be thankful for all the great things you have in your life.

With as many things that we may all differ on – politics, religion, football teams, preferred truck manufacturer, fried or roasted turkey, Mayo or Miracle Whip on the post-Thanksgiving turkey sandwiches, or whatever else may separate us, there’s one thing that we can all agree on: our military troops are out there sacrificing for all of us and their efforts are something to be thankful for.