Calling all Entrepreneurs: Summer is Lemonade and Cookie Time

As I roam around Wilmington and the surrounding areas looking for new and flavorful ways to feed my face, I’ve come across the full spectrum of eateries. From fine dining to food trucks and pretty much everything in between, I’ve grown to love all the culinary delights that our area has to offer.

But every once in a while, I come across an unassuming place that ends up feeding my soul as much as my appetite. Such was the case this weekend.

Cruising into my neighborhood after a great lunch date with some tacos (tacos are ALWAYS a great date), I came across a small and quaint little artisanal bakery that made my heart smile.

Not your typical purveyor of baked goods, this place doesn’t even have a name. But what it lacks in commercial investment potential, it more than makes up for in character and some pretty darned good cookies and brownies. 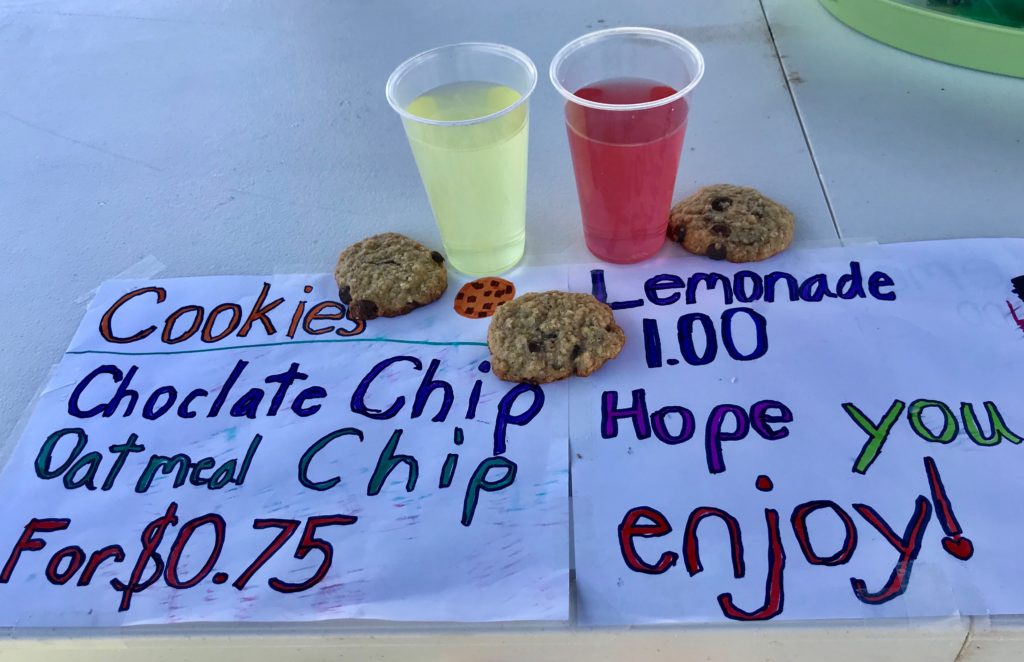 You see, I came across an “old school” lemonade and cookie stand. Yes, one of those nearly extinct, young entrepreneur-driven creations that have launched many a successful business career but that have unfortunately fallen by the wayside since cell phones and video games became more important for a kid’s weekend plans.

Part love of baking and part competitive spirit because her brother was doing so well with his neighborhood lawn mowing efforts, 11-year-old Anna enlisted the help of her 8-year-old friend Naomi and the rest is history.

“We were wondering what we could do,” said Naomi who acts as Beverage Manager and Chief Financial Officer. “We thought maybe we could wash cars, but I don’t really know how,” she said. “Then we thought maybe dog walking would be good, but a big dog might knock me down.” Don’t worry young lady, some of the world’s most successful businesses had similar starts. Executive Chef, Lead Baker and CEO Anna loves baking with her mom and is a self-admitted queen of the kitchen. As potential income earning opportunities were discussed with her business partner, Anna offered up the idea of using her passion for baking and the plan was set in motion.

A business plan was created, written in the bold, heartwarming font that only kids can produce and the duo was off and running. Literally. They ran down the street to their friends Aida and Shae, enlisted their help and got to work. A comprehensive marketing and advertising strategy was implemented, focusing on specific demographics (EVERYONE because who doesn’t love cookies and lemonade sold by
kids, right?), while Anna came up with the menu. The bakery, unofficially called “Our Lemonade and Cookie Stand” opted for the traditional route with a small but successful offering of chocolate brownies as well as sugar and chocolate chip cookies. Naomi’s exhaustive market research concluded that traditional and raspberry lemonades would pair best with the baked delights. 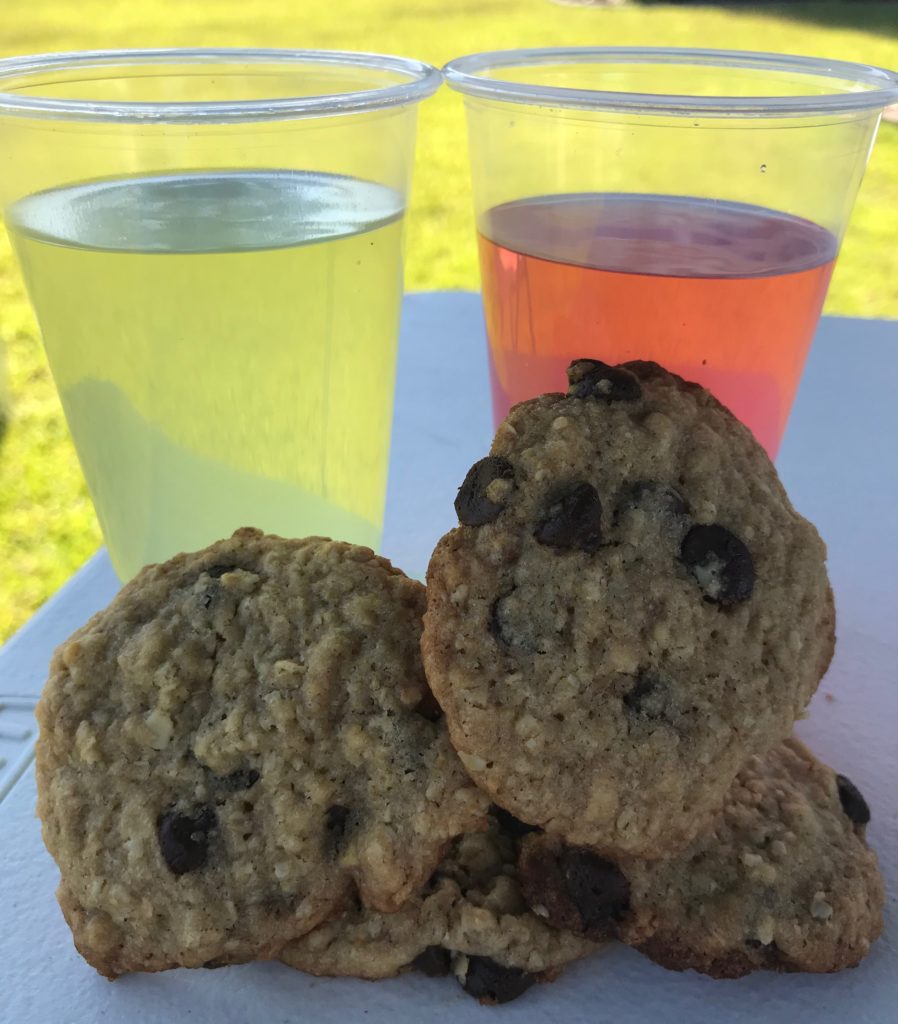 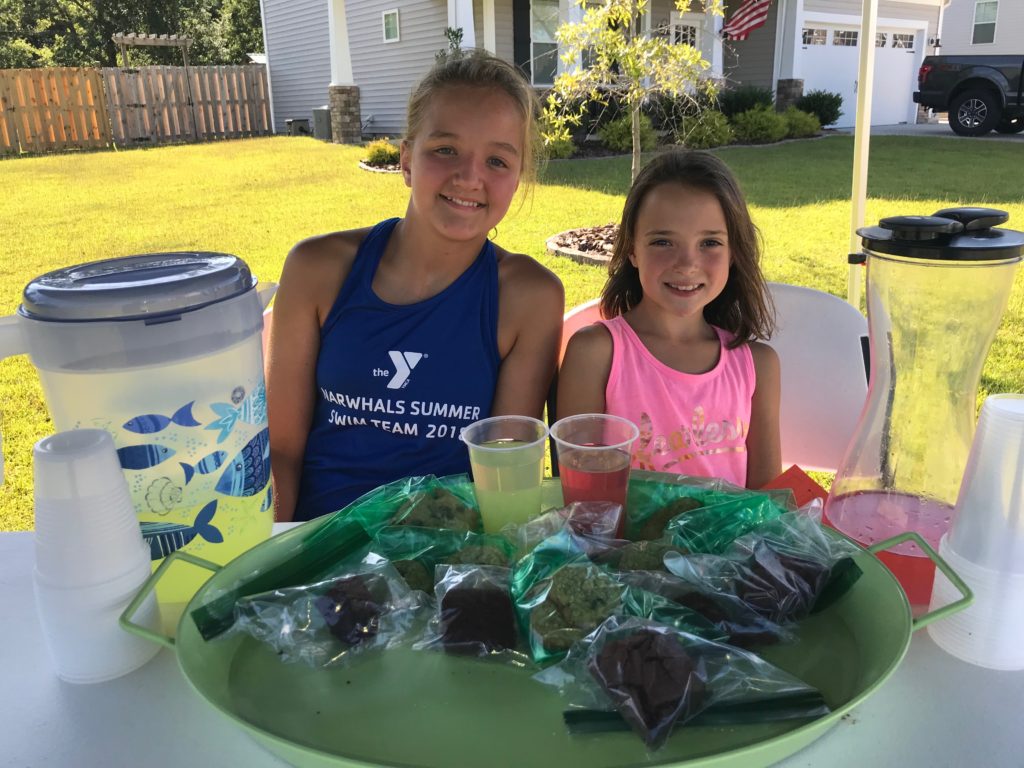 I stopped in and was immediately greeted by the entire staff with warm smiles and cold lemonade. That’s a great start for ANY restaurant and there are some much larger “brick and mortar” places in town that could learn from these ladies. As I always do when I stop in to a new restaurant, I asked the staff of this lemonade and cookie stand for a recommendation and went with the raspberry lemonade and chocolate chip cookie combo they said would be best.

I inhaled my order and immediately placed another to try the remainder of the menu. I wasn’t alone as the word had gotten out that a new bakery had set up shop at a great location (the corner lawn donated by a supporter of small business, aka Anna’s next door neighbor) and the cars lined up for both dine in and drive through service. The cookies and lemonade left the girls’ tent at a rapid pace and a very jubilant CFO gave a verbal balance sheet update to the entire staff with each transaction. This was met with girlish giggles and a surprisingly efficient process for serving all who stopped by.

I asked what the general public and the foodie community should know about their business and the answer was just as sweet as the cookies they were selling. “We make all our stuff from scratch,” exclaimed Anna.

As I watched this all take place, I couldn’t help but take a step back and look at the huge success these young ladies were in the middle of creating. Far greater than their goal to “make enough money to buy some walkie-talkies and donate to the Children’s Hospital” (insert “OMG that’s so sweet” comment here), these girls created a venue for neighbors to come out and get to know each other, to make new friends and preserve a piece of Americana that was once far more prevalent than it is today. These girls could have quite easily been inside, glued to electronics or doing anything BUT waking up at 7 a.m. on a Saturday, making cookies, taping flyers and waving to eager patrons. The girls told me they wanted to take “real” cooking classes someday and if they do I’m sure they’ll diversify their menu but for now though, they’re keeping things simple and it’s a recipe for success.

As I left, having eaten far more sweets than I should have but without one bit of regret, my heart was smiling to see such a memory from my own childhood still alive. I hope the girls made enough for their walkie-talkies or to start saving for cooking classes because if ever there was a time that a small business deserved success, this is it.