“When I got this job, I started trying to figure out how to be important here. Everybody was such a good cook. I was literally like the hamburger boy. It’s a crazy business. If you don’t find a way to be valuable, then you aren’t.“

Finding a niche with the local food movement

I’ve been at Rx for four years and we’ve been open for 4-1/2 years; the direction we’ve taken with our food here has been a real collaboration. I was at the Caffe Phoenix, which is closed now, before here, and I’ve been in the local food movement since before Rx was around. Even before there was much of a local food movement at all. I used to run what I

called a radius menu. I quit doing “specials,” and what I did instead was have a chalkboard menu that was only local food. I would average. Say, cucumbers came from 2 miles away, cheese came from 8 miles away, something came from thirty miles away, I would average it, and at the end it would have an average mile for the meal you got. And I would keep it within a hundred miles.

From Phoenix to Rx, via Peru

My friend Alex Morgan who was working at the Phoenix came here, to Rx. Now, he lives up in Portland, Maine and is the chef at a restaurant called Petite Jacqueline. I left the Phoenix and lived in Peru for four months. I worked in a restaurant down there, cooked and served. And when I came back, they hired me at Rx.

I’ve traveled all over the place. I travel as much as I can. I’ve been to over twenty countries, most of them Latin countries. They are inexpensive. I like Spanish a lot, and I like the culture. 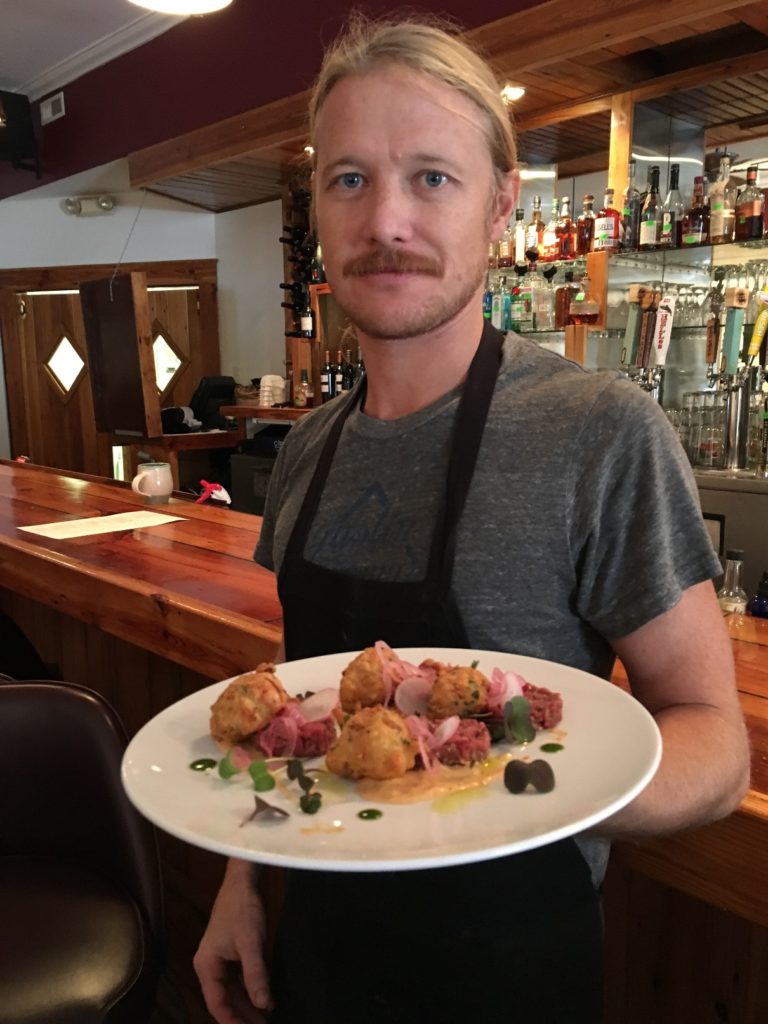 Peruvian food was actually my least favorite of any food I’ve had. Peru is a lot of starch. They eat potatoes, rice, and pasta all on the same plate. All the time. It’s heavy, you know what I mean?

The food I like the best is New America. I specialize a lot in pastas – I know I just said I don’t like starches, but I specialize in house made pastas. We usually have at least two pastas on the menu. The pastas I do are unusual in that people don’t often know how to make them: cavatelli, rigatelli, gnocchi, fettucine, angel hair, agnolotti, ravioli, tortellini… all types of pasta. I make them all from scratch.

When I started at Rx Restaurant – they were running pastas and stuff – and handling ravioli is kind of a delicate thing, so I started doing that.

I also started doing butchery. So now I’m the restaurant’s butcher. I’m the butcher for Rx and Pembroke’s. I butcher whole hogs. I take the hog apart: make pork rinds out of the skin, make stock out of the bones, make demi out of the bones. We used to use veal, but it wasn’t local, and it wasn’t sticking to our plan, so I stopped doing that. I absolutely focus on the local. That’s what Rx does. If you see animal or a protein on the menu, it’s local. Fish comes in, and it’s from North Carolina.

And as much as we can, we try to do organic. We have four or five farmers we use, and we know them, we’ve been out to their farms. It’s really a family thing. The point of it is that we are stimulating the economy, we are helping out friends and family, people who are local. It’s absolutely from farm to table. And we are doing it in a very serious way, with a lot of integrity. I can show you the walk-in: the vegetables are covered with dirt, animals have heads on them, and it’s a non-stop dedication to that business plan. 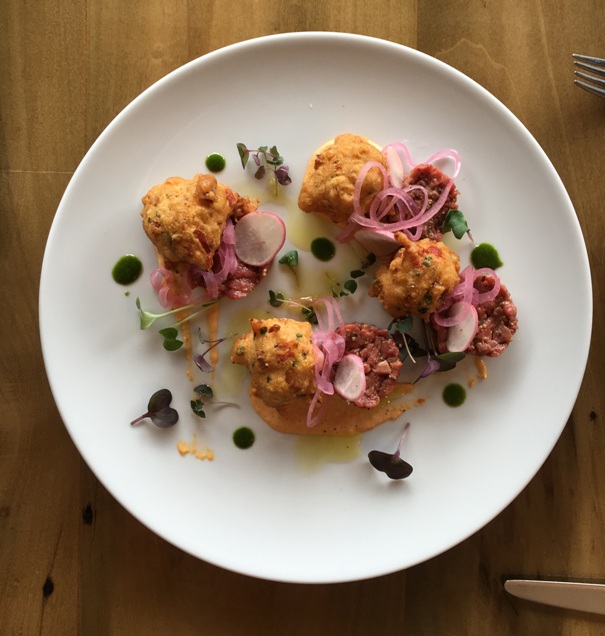 I’m always looking for strange seafood, to tell you the truth. Today I got in two whelks. I’m making a grass-fed beef tartare from North Carolina, and the bread on it’s going to be conch fritters. This is how I start my day: I call the seafood guy – Craig – I talk to him every single day for probably ten minutes on the phone, and sometimes it’s about life and stuff, and, with food, I can tell him what I’m trying to do and he can come up with some interesting things. Like today, he had those two whelks. And he said, nobody’s going to buy them, no one wants to mess with them. Well, I bought them and now we’re going to serve them. It’s stuff like that, that’s what I like.

More on the menu

Rx used to be the “pork” restaurant, but I’m changing that. Of course, our pork fabrication is above anyone else’s in Wilmington, it’s high up in the state too. I learned it all here. The Chef de Cuisine who is at Husk in Charleston now was here when I got this job. He is a butcher and we worked hand-in-hand, and my skills developed with him. When I took over, I was like, I like that pork stuff, but I like focusing on other things, too. We have seafood right here, it’s all good, and there is so much of it.

From lunchboxes to chef

I’ve been a cook since I was a little kid. I cooked with my mom mostly growing up. My identical twin brother never had any real interest in it – he’s a good cook too, but he wasn’t into it like I was. I’d make our lunch for school – so I’ve been cooking since elementary school. I’d make the salad or make the sandwiches. I’ve always loved it.